Swine Flu Redux : We’re Not Out of the Woods Yet 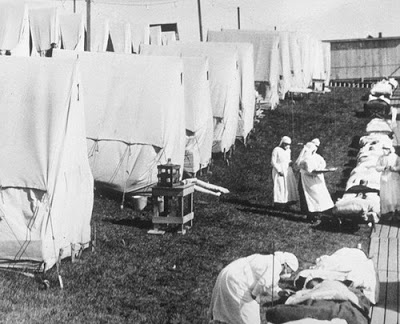 Doctors and nurses treat patients at a tent hospital for influenza victims in Lawrence, Mass., in 1918. Archive photo from Hartford Courant.

Last week, I wrote a post about the H1N1 virus (swine flu) and how scientists have discovered that it has some genetic differences from the first time the H1N1 virus spread in 1918. That time it was known as the Spanish Flu, and it wound up killing more people than World War I did (combatants and civilians combined).

The scientists said the genetic difference meant that the current strain of H1N1 was probably no more deadly than a regular yearly flu outbreak, which kills around 36,000 in a normal year. It looks like the scientists were right. The swine flu has turned out to not be the pandemic killer that health officials had feared, and in fact, they seem to be getting a hold on this outbreak.

Now you might think I would be pretty pleased with myself for posting that while others were still beating the pandemic drum. I’m not. That’s because I know a little bit about the Spanish Flu (my own grandfather died from it in 1919). Yes, I said 1919.

If you’ll forgive me for using a euphemism, we’re not out of the woods yet. The normal time for the flu season is Fall and Winter, and it’s entirely possible that the H1N1 virus may pay us a second and possibly even a third visit at that time.

Any scientist will tell you that a virus can evolve (or mutate) very fast. What if it has mutated into a much more deadly form when it returns? We could still have a repeat of the pandemic known as Spanish Flu.

I’m not trying to be an alarmist, just a realist. It may not come back. If it does, it may still be fairly benign. But it could also be very nasty and create a real mess. The point is, we must remain vigilant. We can’t be caught napping if it returns in a few months.

1 Response to Swine Flu Redux : We’re Not Out of the Woods Yet