KBR Still Owes Millions from the Corruption in Iraq 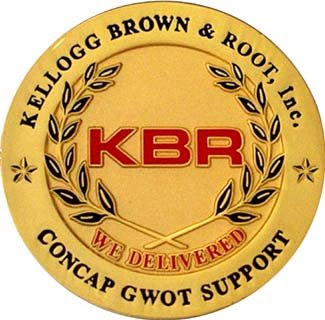 Senators Accuse Pentagon of Delay in Recovering Millions in Overcharges
By James Glanz / May 3, 2009

The Pentagon has done little to collect at least $100 million in overcharges paid in deals arranged by corrupt former officials of Kellogg Brown & Root, the defense contractor, even though the officials admitted much of the wrongdoing years ago, two senators have complained in a letter to Defense Secretary Robert M. Gates.

The letter also said that the Army had almost completely failed to move away from the monopolistic nature of the logistics contract that has paid the contractor, now called KBR, $31.3 billion for logistics operations in Iraq, Kuwait and Afghanistan.

The New York Times obtained a copy of the letter, dated Friday, by the senators, Claire McCaskill, Democrat of Missouri, and Susan M. Collins, Republican of Maine. Senator McCaskill is chairman of a contracting oversight subcommittee of the Senate Homeland Security and Governmental Affairs Committee, and Senator Collins is the subcommittee’s ranking Republican.

Their letter is likely to revive allegations that the Pentagon has become so close to KBR, and relies so heavily on it, that there is little inclination or incentive to discipline the company, in response to either Congress or critics outside the government.

In 2007 the Army split the logistics contract, known as Logcap, in a way that allowed several companies to compete for each new need. The Army did this partly to avoid relying solely on KBR, whose pricing practices, even when technically legal, have sometimes received criticism as exorbitant. But the Army has seldom used the newly competitive arrangement.

The senators wrote that as of February, the latest date for which the subcommittee had received information, the Army had “not awarded a single task order for work in Iraq,” the biggest source of logistics work.

In pressing for use of the new competitive arrangement, the senators cited 2008 legislation that calls for competition by multiple companies on military contracts unless there is “a compelling reason not to do so.” The senators also brought up Congressional testimony by the Army’s chief of logistics that they said indicated the Army had no such compelling reason.

Reached for comment, Dan Carlson, a spokesman at the Army Sustainment Command in Rock Island, Ill., which administers the work, pointed out that under the new competitive arrangement, in which KBR, Fluor and Dyncorp submit bids, Fluor and Dyncorp have received some work in Afghanistan and Kuwait. Mr. Carlson said that the Army was working toward awarding work in Iraq under the new competitive arrangement.

A spokeswoman for KBR, Heather L. Browne, said all of KBR’s logistics contracts have been won competitively. She added that “when KBR has discovered wrongdoing of any sort by an employee, we have swiftly reported it to the government,” and said the company “in no way condones or tolerates illegal or unethical behavior.” KBR itself has not been accused of wrongdoing in any of the cases of fraud by former employees.

Ms. Browne made clear that the company intended to continue its logistics work, saying KBR remained committed to high quality and to “engaging in a transparent and fact-based dialogue with the government.”

The letter and the Pentagon auditing documents that back up its conclusions are likely to be a point of discussion in Washington on Monday, when the Wartime Contracting Commission, a bipartisan legislative commission, is scheduled to meet on the logistics program, according to its Web site.

To the irritation of KBR’s critics, the Army has generally upheld the bills the company has submitted to the military, even when the Pentagon’s own auditors have questioned the amounts. But the argument that the Army was overcharged appears to be more clear-cut in the cases of several former KBR officials convicted of accepting bribes and kickbacks.

In those cases, the Army asked KBR to perform a certain task under the Logcap contract, like buying living trailers or building a dining facility, and the KBR officials found subcontractors in the region to carry out the actual work. The officials took bribes to steer the work toward subcontractors who were not the low bidders, or simply inflated the worth of the contracts once they had been awarded.

In the contracts handled by just one of those officials, Stephen Lowell Seamans, who pleaded guilty to bribery and conspiracy in March 2006, Pentagon auditors quickly found potential excess profits by a Kuwaiti subcontractor of $49.8 million, or 76 percent, “as a result of Mr. Seamans’s fraudulent activities,” the senators wrote.

Of $306 million in tainted contracts, at least $100 million of the charges appeared to be unjustified, wrote the senators.