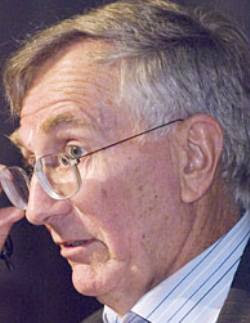 Journalist Seymour Hersh says there were ‘horrible things done to children of women prisoners, as the cameras run.’

Hersh gave a speech. . . to the ACLU making the charge that children were sodomized in front of women in the prison, and the Pentagon has tape of it.

[This story was posted by Alex Koppleman. It was originally published on Thursday, July 15, 2004.]

After Donald Rumsfeld testified on the Hill about Abu Ghraib in May, there was talk of more photos and video in the Pentagon’s custody more horrific than anything made public so far. “If these are released to the public, obviously it’s going to make matters worse,” Rumsfeld said. Since then, the Washington Post has disclosed some new details and images of abuse at the prison. But if Seymour Hersh is right, it all gets much worse.

Hersh gave a speech last week to the ACLU making the charge that children were sodomized in front of women in the prison, and the Pentagon has tape of it. The speech was first reported in a New York Sun story last week, which was in turn posted on Jim Romenesko’s media blog, and now EdCone.com and other blogs are linking to the video. We transcribed the critical section here (it starts at about 1:31:00 into the ACLU video.) At the start of the transcript here, you can see how Hersh was struggling over what he should say:

“Debating about it, ummm … Some of the worst things that happened you don’t know about, okay? Videos, um, there are women there. Some of you may have read that they were passing letters out, communications out to their men. This is at Abu Ghraib … The women were passing messages out saying ‘Please come and kill me, because of what’s happened’ and basically what happened is that those women who were arrested with young boys, children in cases that have been recorded. The boys were sodomized with the cameras rolling. And the worst above all of that is the soundtrack of the boys shrieking that your government has. They are in total terror. It’s going to come out.”

“It’s impossible to say to yourself how did we get there? Who are we? Who are these people that sent us there? When I did My Lai I was very troubled like anybody in his right mind would be about what happened. I ended up in something I wrote saying in the end I said that the people who did the killing were as much victims as the people they killed because of the scars they had, I can tell you some of the personal stories by some of the people who were in these units witnessed this. I can also tell you written complaints were made to the highest officers and so we’re dealing with a enormous massive amount of criminal wrongdoing that was covered up at the highest command out there and higher, and we have to get to it and we will. We will. You know there’s enough out there, they can’t (Applause). …. So it’s going to be an interesting election year.”

Notes from a similar speech Hersh gave in Chicago in June were posted on Brad DeLong’s blog. Rick Pearlstein, who watched the speech, wrote: “[Hersh] said that after he broke Abu Ghraib people are coming out of the woodwork to tell him this stuff. He said he had seen all the Abu Ghraib pictures. He said, ‘You haven’t begun to see evil…’ then trailed off. He said, ‘horrible things done to children of women prisoners, as the cameras run.’ He looked frightened.”

So, there are several questions here: Has Hersh actually seen the video he described to the ACLU, and why hasn’t he written about it yet? Will he be forced to elaborate in more public venues now that these two speeches are getting so much attention, at least in the blogosphere? And who else has seen the video, if it exists — will journalists see and report on it? did senators see these images when they had their closed-door sessions with the Abu Ghraib evidence? — and what is being done about it?

(Update: A reader brought to our attention that the rape of boys at Abu Ghraib has been mentioned in some news accounts of the prisoner abuse evidence. The Telegraph and other news organizations described “a videotape, apparently made by US personnel, is said to show Iraqi guards raping young boys.” The Guardian reported “formal statements by inmates published yesterday describe horrific treatment at the hands of guards, including the rape of a teenage Iraqi boy by an army translator.”)

This entry was posted in RagBlog and tagged Abu Ghraib, Torture, War Crimes. Bookmark the permalink.