Teaching War : What Did You Learn in School Today? 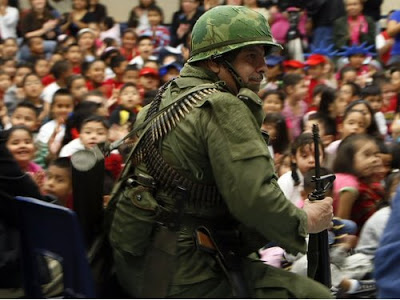 Recently, the Austin American-Statesman ran a photo of a Vietnam veteran addressing a large assembly of young children at Metz Elementary as part of a Veterans Day program called ‘Take a Vet to School’. In response to this photo, I wrote this letter to the editor, with the title ‘Take a vet to school, leave the gun at home.’

I am compelled to comment on the photo which ran on page B-1 (Nov. 8th) of a soldier, dressed in battle fatigues and carrying a rifle, standing in front of an assembly of young children. Metz Elementary’s decision to invite an armed representative of the military into the school is, unfortunately, illustrative of the culture of militarism which permeates our society. This culture embraces violence, so long as it is associated with a uniform and a flag. If we are ever to live in a society which values humanity, and places human needs above those of domination and conquest, we must reject the notion that government sponsored killing is acceptable. If we are ever to live in a peaceful world, the insidious indoctrination of our children into the military culture must end. Veterans can, I think, contribute significantly to building this peaceful world; they should be encouraged to leave their guns at home and tell the truth about war.

I encouraged others in my group, CodePink Austin, to also send letters if they were concerned about the judgment of the school and the school district. Diana Claitor took it a step further and contacted the AISD ombudsman’s office to express her concerns. The response she received came from Jennifer Atkinson, a first grade teacher and coordinator of “Take a Vet to School Day.” Ms. Atkinson had justifiable objections to Diana’s criticism, but they were mainly based on our rush to judge the event solely based on one photo. She pointed out that the veteran was carrying a fake, wooden gun and was dressed in his “parade uniform,” not battle fatigues. She also gave some detail about how they prepared for the event, and what happened after the assembly:

“The photo did not show the weeks of preparation our students and teachers spent learning about who Veterans are, what they do for our country and the origins of the Veterans Day holiday. The photo does not show the hallways decorated in red, white and blue, displayed with thank you letters, poems about freedom and stories about what it means to be a hero.

“Our honored guests never came to share ‘what war is like,’ they came to share their time and to share a little piece of themselves and their experiences as a Veteran and to accept the thanks that the students of Metz wanted to offer.”

So far, so good, but, then, Ms. Atkinson takes off on a tangent that is both erroneous and accusatory:

“Veterans Day is NOT, and never has been, about war. It is about the men and women who has [sic] served our country, so selflessly, so people like you can have the freedom to express their opinions, even if they are made on false assumptions.”

What? Veteran’s Day is NOT about war? “People like you?”

Here’s what Diana had to say in response to this:

The following statement is disingenuous at best, but many would find it just plain wrong: “Veterans Day is NOT, and never has been, about war.” Actually, the official U.S. Army site and the U.S. Library of Congress point out that the origins of Veterans Day are in Armistice Day, declared in 1918 to mark the end, on November 11, of World War I. While Veterans Day ceremonies of course do focus on something other than war, when you have guns, bandoliers, memorials to those killed in battle and platoons of marching soldiers to celebrate a holiday, there is something about war going on. While children should learn about war, many of us are concerned they don’t learn as much about peace and the various ways people can serve their country.”

Diana responded to the publication of this photo for the same reason I did — because I feel strongly that our children should not be taught that war is a glorious and necessary means of obtaining (or imposing) freedom. If veterans are going to take up our children’s educational time, then, by all means, they should share “what war is like.” They should tell the truth about war and they should do it without the bells and whistles of camouflage and guns, fake or real. Let’s bring in veterans who are missing limbs; let’s hear the stories of seeing comrades killed and the killing of innocent civilians. Let’s discuss the realities of war. My guess is that if we were compelled to do this… to speak of and hear the truth about war, Veteran’s Day celebrations would become few and far between. We might come to understand that there is nothing in war to be celebrated.