Ted McLaughlin : Are We Moving Towards Single-Payer? 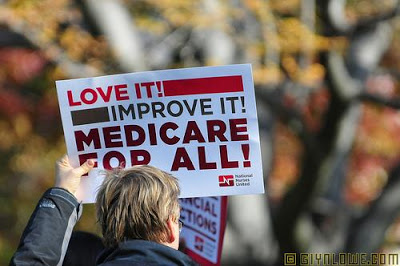 There will be a huge pressure to reform Medicaid — and the only way to reform it adequately is to make it a federally-administered program.

It looks like the Affordable Care Act (Obamacare) is here to stay. After last week’s Supreme Court decision, the only way it can be overturned now is for the Republicans to win the White House and both houses of Congress in the coming election (which is very unlikely) — and even then, they might find public pressure would prevent its repeal.

Right now, a slight majority of people don’t like Obamacare. Some have projected this to mean that a majority of Americans would like to see it repealed. That is just not true. One recent poll showed that 79% of Americans like most of the reforms and don’t want it all repealed.

Another fact commonly overlooked is that among those who are against Obamacare, about 22% don’t want it repealed but made stronger. These people would like to see a public option at a minimum (and really want a single-payer system like those in other developed countries). When the program was first passed, I was among those opposing it because it didn’t go far enough. I was afraid that all it really did was to delay the United States from going to a single-payer health insurance system.

But after a lot of thinking about it, and a few facts coming to light, I’m starting to change my opinion. I now believe that Obamacare might actually hasten America’s progress toward a single-payer system, instead of delaying it. That’s because the program is responsible for creating (or increasing) three pressures on the health care system as a whole to move toward a single-payer system. These three pressures are:

Let me take these in order. First, in the past the insurance companies have not been required to spend the money they get for real medical care. While government-run Medicare has an overhead expense of 3% to 4%, many of the private insurance companies were putting 30% to 40% of their premiums toward “overhead.”

And the more they put into this area (and the less into medical costs for consumers), the more profit they had. This was a primary reason for the record-breaking profits those companies were showing.

Obamacare ended that. A private insurance company must now put at least 80% of its premium income toward actual medical costs of its consumers (and the giant companies must spend at least 85% on medical costs).

While this still allows the insurance companies to make a decent profit, it has put a serious crimp in the outrageous profits they were making (by denying claims and raising premiums). Now if they raise premiums, they must also increase the amount they spend for medical costs (or wind up refunding the raise).

In other words, the large insurance companies no longer have a license to steal — and they don’t like that. Forbes Magazine reports that some insurance companies are already getting out and searching for other, more lucrative, ways to do business — and this movement out of insurance to other things will probably just continue to grow. 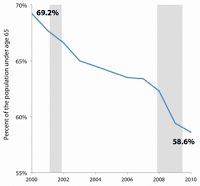 And those companies choosing the penalty over insurance coverage will just be a short step away from approving of single-payer insurance (which would most likely be funded by employee/employer contributions just like Social Security), as they realize it would be cheaper for them than providing their employees with ever-rising private insurance.

Third, and perhaps the biggest pressure for single-payer insurance, is the Republican state governments refusing to institute the Medicaid reforms called for in the program. The red states in the map above (from ThinkProgress ) are those with Republican leadership. The 10 states in dark red have already said they will not adopt the Medicaid reforms to cover most of the poor (even though the federal government would pay all of the cost for three years and then pay 90% of the cost). And it is extremely likely that the lighter red states will soon follow suit.

That means many millions of Americans who thought they would be getting insurance coverage because of the reforms, will be denied it because the Republicans will just continue the current inadequate Medicaid programs. They will do this because they don’t consider medical care to be a right, but only a privilege available to people who can afford it.

For them, their ideology is more important than the lives and health of many millions of their fellow citizens. And they can get away with this because the Supreme Court killed the provision that would have forced the states to reform Medicaid.

Now one of the primary reasons Obamacare was passed was that there are 50 million people in this country without any kind of medical insurance. Some of these will now be able to get private insurance because of the health insurance exchanges and government subsidies. But a large part of this 50 million (the poor and the working-poor) were meant to be covered through Medicaid.

If this doesn’t happen, there will be a huge pressure to reform Medicaid — and the only way to reform it adequately is to make it a federally-administered program (like Medicare). And the easiest way to do that is to let those making less than a certain salary qualify for Medicare (and do away with Medicaid).

This huge swell in Medicare, combined with decreasing employer-based insurance and insurance companies leaving the business, will bring great pressure to go to a government-run single-payer insurance system.

The experience of other countries has shown us that the money spent on medical care overall will then decrease (since we spend much more per capita than any single-payer country). It will also decrease premium costs for both individuals and businesses (since high overhead and huge profits will be eliminated).

The way I see it, Obamacare did not delay going to a single-payer system. In fact, it has probably created (or increased) the pressures propelling us to adopt a single-payer system much sooner. It has to happen. There is no other real solution to our current broken health care system. Obamacare made some improvements, but it didn’t fix the broken system. But maybe it is pushing us much closer to the real solution.