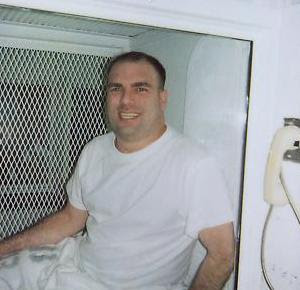 Larry Swearingen is scheduled to be executed Jan. 27 even though the crime he is charged with probably took place while he was locked up.

If the three men are executed they will be counted as numbers 427, 428, and 429 on the official list of persons executed by Texas since the death penalty was re-instated in 1982.

During the last week of January 2009 the state of Texas is scheduled to execute three men by means of lethal injection. Each case raises a significant question about administering certain death in a world of uncertain justice.

If the three men are executed they will be counted as numbers 427, 428, and 429 on the official list of persons executed by Texas since the death penalty was re-instated in 1982. As one of 36 states that has carried out the death penalty since 1976, Texas accounts for nearly 40 percent of the executions (see the fact sheet in pdf format at deathpenaltyinfo.org

On Tuesday, Larry Swearingen is scheduled to be executed for a crime that probably took place while he was in jail. Texas blogger Scott Henson reviews the facts at Grits for Breakfast. Questions about the Swearingen case have been joined by Texas Monthly and The Houston Chronicle. It is difficult to imagine that the execution would be allowed to take place with so many credible doubts being echoed.

On Wednesday, Virgil Martinez is scheduled to be killed for shooting to death an ex-girlfriend, a friend who tried to save her, and two of her children. It was an awful crime. But Martinez was arrested at a mental hospital where he had admitted himself for hearing voices ordering him to kill, and jurors were never told that he suffered from temporal lobe epilepsy (TLE). The Brazosport Facts published a good overview of the Martinez case in 2006.

According to federal court records accessed by the Texas Civil Rights Review, a magistrate judge concluded in 2005, and a federal district judge agreed in 2006, that the trial attorney for Martinez could have made better use of medical evidence about TLE and “post-seizure aggression.”

The federal documents further indicate that Martinez did exhibit “bizarre and at times violent behavior” during his time at a mental hospital.

But in 2007 a federal appeals panel argued that the trial attorney for Martinez was justified in not telling jurors that the defendant had a condition that could cause “savage and uncontrolled” aggressiveness. The attorney argued that presenting the information, along with other facts about Martinez’ history of aggression and jealousy, might have increased the jury’s likelihood of arriving at a penalty of death.

The appeals panel agreed with the magistrate and district judges that the lawyer did not at the time of the trial understand the difference between violence during a seizure and “post-seizure” aggression. And she therefore may have discounted the value of the medical evidence for the wrong reasons. But, giving strict attention to the question that was put to them, the appeals panel refused to label this failure as a mark of attorney incompetence.

The federal review of the Martinez case strengthened the case for “medical” causes that may have played a role in the shooting rampage that left four people dead. But the new medical findings were given no procedural value in the process of appeal.

So it may still be the case that “post-seizure” aggression is a medical condition that affects Martinez, and which affected him at the time of the four killings. Setting aside the question about whether his lawyer was competent in selecting a defense strategy under the circumstances of the trial, the appeals record has produced a fact that is significant.

Perhaps there is a legal way to put the question that will result in a stay for Martinez.

On Thursday, Ricardo Ortiz is scheduled to be killed by lethal injection because he was convicted of lethally injecting a cellmate with a triple dose of heroin.

So far, the Texas Civil Rights Review has found only a few hundred words of documentation in the case, but they are deeply troubling on their face.

Slim facts posted by Texas prison authorities says that Ortiz and two other cellmates cooked up three doses of heroin in an El Paso cell and that Ortiz injected all three doses into the victim who died of an overdose.

The Texas Attorney General stated this week that Ortiz committed the crime in order to prevent his cellmate “from testifying against him” about some bank robberies.

From the little we know, here is what Texas officials would have us believe: they held a prisoner in an El Paso cell with someone who could testify against him. Then they allowed three doses of heroin into the cell along with cooking utensils and at least one syringe. Then they didn’t smell a thing while the heroin was cooking, and didn’t notice a thing until the next cell count revealed a dead prisoner.

In the case of Ricardo Ortiz, the official accounts beg us to ask: are Texas authorities so into lethal injections that they’d set up the ideal conditions for one and then use their own malpractice as a foundation to practice another?

Although three executions in a row are scheduled for Texas next week, a state of more perfect criminal justice will see three stays down there on death row.