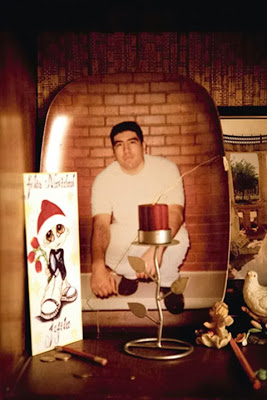 Daniel Plata, a mentally retarded criminal saved from execution in Texas, is shown in picture on a bookshelf at his home. Photo by Michael Stravato / The Texas Observer.
Cruel and unusual in Texas:
Executing the mentally retarded


‘When you have junk science in a case, it’s like pouring poison into a punch bowl,’ — Attorney Kathryn Kase

An investigative report reveals that Texas continues to execute mentally retarded prisoners despite a U.S. Supreme Court ban. The state has been basing its decisions on unreliable mental health testimony by a court-appointed psychologist.

In a series of articles in The Texas Observer, Renée Feltz reported the mistakes made by George Denkowski in psychiatric evaluations of a number of patients — and how catching a similar mistake saved the life of Daniel Plata.

“To those of us familiar with the right way to do these things,” said Jerome Brown, a Texas psychologist, “it is very apparent that what he’s doing is wrong.” Brown was referring to the medical evaluations Denkowski did of inmates deemed potentially mentally ill.

In a Supreme Court ruling in 2002, Atkins v. Virginia, it was decided that “executions of mentally retarded criminals are cruel and unusual.” The impetus behind this decision was that, although mentally disabled people can distinguish between right and wrong, their ability to control impulsive behavior or learn from mistakes was curtailed.

To decide whether a defendant suffered from a severe enough level of mental disability, the court ruled that persons with an IQ score of 70 or below could legally be considered to have below-average intellectual abilities and “deficits in adaptive behavior” since before the age of 18. This ruling exempted Daryl Atkins, the defendant, from death row.

One of the men focused on in the investigative series, Daniel Plata, was saved from Death Row by an investigation into methods used by the prosecution’s appointed psychologist, George Denkowski, to determine whether Plata was mentally capable and it was therefore legal to execute him.

Plata, whose mother said his brain had been denied oxygen at birth because of an umbilical cord tied around his neck that led a nurse to assume he would have cognitive difficulties, was interviewed by Denkowski, who then concluded that Plata had a score of 77, high enough to be deemed sufficiently psychologically aware to execute.

However, the article points to Denkowski making assumptions during the test (specifically of the English-language ability of Plata, a Mexican immigrant), making non-procedural changes such as rewording test questions he asked the defendant, and giving Plata more points than some answers merited. Each of the sessions was videotaped by Plata’s attorney.

Denkowski has thus far testified in nearly two-thirds of the appeals related to a death row prisoner’s mental ability in Texas — 29 cases. He found the defendants mentally disabled only eight times.

Robert Morrow, an attorney familiar with Denkowski’s cases, said that he [Denkowski] had an “almost Dr. Death status” among defense lawyers, and “Denkowski pretty much thought that if you had engaged in criminal behavior you were not retarded.”

Though Denkowski concluded that Plata was not mentally retarded, a psychologist hired by Plata’s lawyer did find him to be, and after hearing the case U.S. District Court Judge Brock Ellis ruled that Plata is “a person with mild retardation” and should be removed from Death Row.

Not all the inmates interviewed in Texas’s system have been so lucky. Only 13 men have been removed from Death Row in Texas since 2002 because of their low mental development — 28 percent of cases appealed under the Atkins ruling, while the national rate is 40 percent.

“I suppose you could imagine that Texas Death Row inmates are smarter than everyone else,” said Sheri Lynn Johnson, a professor at Cornell Law School who co-directs its Death Penalty Project, “but I’d be surprised.”

An additional eight states have passed laws that make use of the clinical definition for mental retardation in the Atkins case — Texas has not been one of them. In 2001, the Texas legislature passed a law allowing life sentences for mentally retarded people who have committed capital crimes. However, Gov. Rick Perry did not allow the measure to pass, saying it amounted to a “backdoor attempt to ban the death penalty.”

Since Ellis’s decision to disregard Denkowski’s decision in Plata’s case, Jerome Brown, another Texas psychologist, filed a complaint with the Texas State Board of Examiners of Psychologists.

Brown, who worked with defendants in five cases where Denkowski worked for the prosecution, said the techniques used by Denkowski ultimately amounted to “essentially junk science. It is science that appears to be scientific, but it doesn’t have any background of validation to it.”

The state Board of Examiners of Psychologists recognized Brown’s complaint, and said that Denkowski had made “administration, scoring and mathematical errors” in three cases, including the Plata case. Denkowski has a hearing scheduled for February 16 in Austin, Texas, at which he risks losing his license.

The cases of Steven Butler and Joel Escobedo, inmates now on Death Row, have been put aside until the results of Denkowski’s hearing are known, and there are several other requests for appeals.

The Harris County District Attorney’s Office [said it] no longer works with Denkowski since his evaluation of Plata was overturned.

Plata’s lawyer, Kathryn Kase, said all of Denkowski’s cases should be reviewed. “When you have junk science in a case, it’s like pouring poison into a punch bowl,” she said. “You aren’t going to get the poison out. So you have to pour out the punch, clean the bowl, and start all over again.”