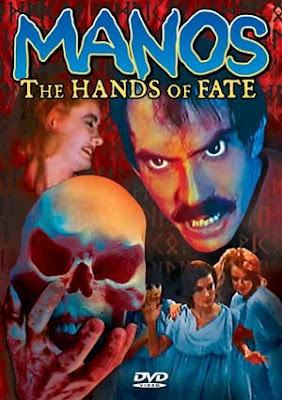 We Texans live with our share of horrors: fire ants, Rick Perry, residents of Plano, but this entry was still something of a challenge. After all, coming up with Texas horror movies without invoking the one that actually has the name of our state in the title is harder than successfully suing local religious figures. Still, a few intrepid filmmakers have found some scares of the non-chainsaw variety in the Lone Star State.

This is a bit of a cheat, seeing as it stars Chain Saw Massacre alumni Edwin Neal and Marilyn Burns. Then again, my friends and I were among the few people who were actually suckered in by H.R. Giger artwork’s (which director Ronald W. Moore tearfully begged the artist to supply for the poster) enough to see the movie in theatrical release. There’s very little “future” in this Austin-filmed horror flick about frat boys tasked with abducting a “Mutant” (a nuclear protester with a penchant for lipstick and mascara) and running afoul of “Splatter” (Neal), an actual mutant with a mean streak.

I’m genuinely heartbroken I couldn’t find the scene where a dude kills a stray cat with an Uzi. You’ll have to make do with this dubbed clip:

How do you stop a killer who can’t die? Ordinarily I’d recommend you track down some member of the Van Helsing clan, but the only hope for the residents of this small Texas town is Sheriff Chuck Norris, who engages in an increasingly futile series of hand-to-hand battles with a resurrected maniac before doing the sensible thing and dropping the guy down a well.

Fine, I just wanted to talk about Chuck some more. But what about that ending? It leaves things open for a sequel!

Perhaps only the great Joe R. Lansdale could come up with a story in which a long-forgotten Elvis and a surgically altered JFK (darkened, Tropic Thunder style, to throw his enemies off track) do battle with an ancient mummy. Set in an East Texas rest home, the film was hampered from the start by Campbell’s insistence on referring to the flick as a B-movie, to director Don Phantasm Coscarelli’s chagrin.

My friend and I saw the River Oaks premiere of this, with Campbell and Coscarelli in attendance, sneaking into the theater while a German romantic comedy (they exist) was screening. We ended up sitting next to the entire Lansdale clan, who’d trekked down from Nacogdoches for the trip. Good people. And they didn’t rat us out

Oh, boo yourself. Did any of you actually watch this? Academy Award winner Tommy Lee Jones and Academy Award watcher Cedric the Entertainer join forces to make the University of Texas a laughing stock to everyone in the country who didn’t attend A&M. I understand it’s not
technically horror, but you try sitting through it without getting the shakes. Fear or nausea…makes no difference.

To give you an idea how bowel-clenchingly awful it is, the Offspring song accompanying this clip is actually better than the actual dialogue.