The Bailout Monster : Feed Me! 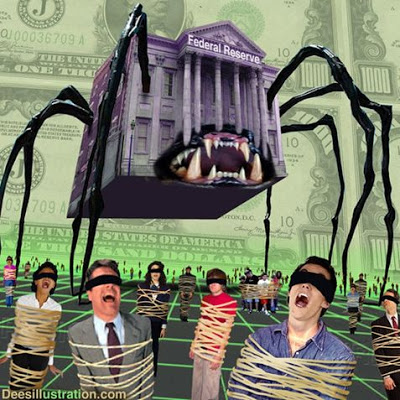 See ‘Fed to Provide Up to $540 Billion to Aid Money Funds’ by Craig Torres and Christopher Condon, Below.

Dividing $540 billion by the US population of 300 million equals $1800 per capita for just this one bailout aimed to stop a run on money market funds. While you weren’t looking, your long term tax burden just got that much higher. But it is worth it to prevent “Great Depression II,” right? Just wait until next month, sucker.

The lenders to the capitalists (the investment bankers and hedge funds) are now drowning in an ocean of the bad debt and failing securitized derivatives they issued. The more fair weather credit deals that got done, the more profits that were made by everyone while the bubble economy was booming.

Paulson and Bernanke will swear to god that this latest money market bailout will be enough to stop a widening panic that might otherwise bring down the whole US economy, so we naturally agree. The federal reserve and treasury team can never run out of enough money to use to try to revive capitalism.

Note that we are really talking about generating and injecting enough strategic bailout dollars to overcome investor fear. But how many dollars might be required is not economics; its about psychology. Nobody can say whether it might not take a big enough dose of dollar liquidity to cause hyperinflation as the side effect of trying to restore investor confidence. The feds risk crippling the economy by adding either too much money or not enough, with stagflation a likely element leading to the final outcome.

Everyone familiar with finance knows that the banks don’t hold nearly enough ready cash or callable reserves to actually pay back all their lenders. Thus keeping lenders happy depends on using psychology to keep everyone from trying to take their money out and discovering it just isn’t there. All the bank may really is a bunch of increasingly bad long term loans that were based on a booming economy that likewise
isn’t there anymore.

Therefore, if everyone really did try to draw out their money all at once, they might have to wait a long time and even then might only get back fifty cents on the dollar. Deflationary psychology tends to feed on itself (look at Japan), much like the optimism of booms. Whatever the correct numbers on eventual payout, the feds will have to try to use financial manipulations that generally reduce and dilute the value of dollars to try to hide what is sooner or later going to be bad news.

Why bad news rather than even slow recovery? It takes ever more oil to keep expanding our oil-addictive global economy, but now oil is peaking. This fact alone is enough to ensure that a large part of current global investments will never earn the profits to pay back their loans.

Fed to Provide Up to $540 Billion to Aid Money Funds
By Craig Torres and Christopher Condon / October 21, 2008

The Federal Reserve will provide up to $540 billion in loans to help relieve pressure on money-market mutual funds beset by redemptions.

“Short-term debt markets have been under considerable strain in recent weeks” as it got tougher for funds to meet withdrawal requests, the Fed said today in a statement in Washington. A Fed official said that about $500 billion has flowed since August out of prime money-market funds, which with other money-market mutual funds control $3.45 trillion.

The initiative is the third government effort to aid the funds, which usually provide a key source of financing for banks and companies. The exodus of investors, sparked by losses following the bankruptcy of Lehman Brothers Holdings Inc., contributed to the freezing of credit that threatens to tip the economy into a prolonged recession.

“The problem was much worse than we thought,” Jim Bianco, president of Chicago-based Bianco Research LLC, said in a Bloomberg Television interview. Policy makers are trying to prevent ‘Great Depression II’ by stemming the financial industry’s contraction, he said.

JPMorgan Chase & Co. will run five special units that will buy up to $600 billion of certificates of deposit, bank notes and commercial paper with a remaining maturity of 90 days or less. The Fed will provide up to $540 billion, with the remaining $60 billion coming from commercial paper issued by the five units to the money-market funds selling their assets, central bank officials told reporters on a conference call.

“This will take a lot of pressure off the Fed and the Treasury,” David Glocke, head of taxable money market funds for Valley Forge, Pennsylvania-based Vanguard Group Inc. Glocke said he’ll be more willing to shift money he’s invested in U.S. Treasuries back into financial-sector commercial paper covered by the plan.

Commercial paper, which typically matures in 270 days or less, is used by companies to finance payroll, rent and other daily expenses.

The new program is called the Money Market Investor Funding Facility, and officials said it’s intended as a backstop for money-market mutual funds to use as needed to meet redemptions.

Today’s action shows that two programs set up last month by the Fed and U.S. Treasury to help money-market funds haven’t stabilized the industry. A Fed official told reporters today that the funds don’t have much of a liquidity buffer remaining.

Last month, the Fed agreed to give loans to banks so they can buy asset-backed commercial paper from money funds. There was $122.8 billion of such loans outstanding as of Oct. 15. The Treasury separately used a $50 billion emergency pool to offer money funds guarantees against losses.

The central bank’s announcement today “is a big event,” BlackRock Inc. Chief Executive Officer Laurence Fink said during an earnings conference call with analysts and investors. “It is the first thawing.”

BlackRock and JPMorgan were members of the consortium of money managers that put together the plan and presented it to the Fed, people briefed on the matter said.

Money-market funds have been hurt by their inability to sell back at par the commercial paper they bought from banks and other issuers, Fed officials said.

The new program “should improve the liquidity position of money market investors,” the Fed said in its statement.

Each of the five special units will buy assets from up to 10 separate bank and financial company issuers. The program may be expanded to include purchases from other money-market investors.

The special-purpose vehicles will finance 10 percent of their purchases by selling asset-backed commercial paper. That paper won’t be eligible for the Fed program that extends credit to banks to buy such assets, a central-bank official said.

The New York Fed will lend the remaining 90 percent to the facilities on an overnight basis at the discount rate, which stands at 1.75 percent.

Each special-purpose vehicle will only purchase debt with the top short-term ratings of A-1, F1 and P-1 given by Standard & Poor’s, Fitch Ratings and Moody’s Investors Service respectively.

The Fed said the facility will be in place until April 30 unless extended by the Board of Governors. Fed officials said they will announce a start date by the end of the week.

In addition to the three programs to aid money funds, the Fed next week will start an unlimited program to purchase commercial paper directly from issuers, after companies had to pay more to borrow or were cut off from that market.

The $62.5 billion Reserve Primary Fund announced Sept. 16 that losses on debt issued by Lehman had reduced its net assets to 97 cents a share, making it the first money fund in 14 years to break the buck, the term for falling below the $1 a share that investors pay.

Institutional investors have since pulled $341 billion from funds that can invest in corporate debt, or 28 percent of assets in those funds.

The Treasury responded to the initial run three days after the Reserve fund faltered by introducing the guarantee program. While that calmed investors, fund managers didn’t resume buying commercial paper because it can’t be sold quickly without realizing a loss.

“There have been very few or no bids at all” in the secondary market, Debbie Cunningham, head of taxable money funds for Pittsburgh-based Federated Investors Inc. Federated had $231.1 billion in money-market funds at the end of August.

“This is another important piece in the puzzle,” Cunningham said. “It will be very helpful in bringing more normal market tendencies back for investors.”

1 Response to The Bailout Monster : Feed Me!