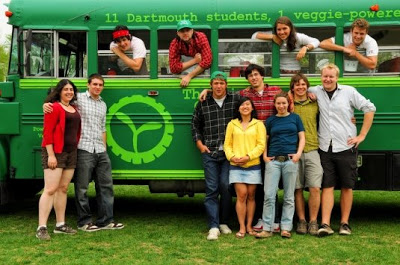 “Either you’re on the bus or you’re off the bus,” was the hackneyed statement proposed to me by three members of Dartmouth College’s Big Green Bus; an ex-diesel goes veggie 37′ foot school bus. My hometown San Francisco weekend was just beginning as I emphatically accepted the invitation to climb aboard and clock some miles with the 12 Dartmouth students on a mission to educate Americans about climate change through the use of this high profile ‘green’ machine.

A tour by resident Andrew Zabel (Dartmouth Class of 2009 and the bus’ leader) begins at the flap doors, in which the crossing of this threshold transports you into a funky retrofitted living space complete with bunk-beds, a library, multiple couches, a flat screen TV, a refrigerator, and a plethora of everyday comforts and necessities. A stroll along the central walkway brings you to the rear of the bus, to an oblong machine, complete with PVC piping, tubes, and everything else needed to take veggie oil and turn it into primo fuel. The ability of the Big Green Bus to run, relies on the ability of its team to track down ample amounts of spent deep-fryer oil from locations all across the country. The 70 gallons of McChicken grease that I witnessed came from a restaurant close to Shoreline Ampitheatre, the Saturday night Big Green Bus destination. The careful navigation of the bus down the restaurant’s narrow back ally and the subsequent assembly of the veggie oil pump to the gas tanks, serves to note the difficulty and time taken to refill the bus. At 7 miles per veggie-gallon, this fill would be enough to take the bus and its crew north to Oregon; stop number 27 of 43.

In ascertaining what the hardest part of the journey has been, Bennet Meyers (Dartmouth Class of 2009) complains of “California”. He then goes on to explain that because of “California’s environmental progressivism and forward-thinking population; it is extremely difficult to find any spent veggie oil in the state, for it has all been accounted for”. Whereas in the past burger joints and restaurants would have to pay a third party to remove this waste, they are now selling it to aggregators.

Within the past year, there is no doubt that the use of alternative fuels, especially biodiesel (made from veggie oil and other grades of diesel fuel) and ethanol have been on the front burner as a way to both help reduce our climatic impact and curb our dependence on foreign oil. However, the recent ramping up in production of biodiesel and ethanol has brought forth some bad rap to the alternative fuels world.

Veggie oil is different however; the carbon impacts are net negative from a business-as-usual baseline. The oil used to power the Big Green Bus, would have been created anyways, and no additional cropland was used to create the stock. Furthermore, the use of veggie oil has been approved by the United Nations Framework Convention on Climate Change as an approved avenue to generate carbon credits (UNFCCC). Such credits, known as CERs (Certified Emission Reductions), are being traded at around $30 per metric ton. Even though the Big Green Bus is not eligible (the U.S. is not a signatory to the Kyoto protocol) to generate carbon credits, their carbon reductions and further, ability to affect change is priceless.

My weekend on the bus is one to remember. The ability to combine an environmental message with the fun of the bus is sure to inspire those who read about, saw, and/or toured the Big Green Bus. Whether it be Newman’s Own, Timberland, or Waste Management (3 of the bus’ biggest sponsors), corporations and individuals alike are hoping on this big green machine, helping to spread this green gospel.