The Conflicting Imperatives of Science and Law 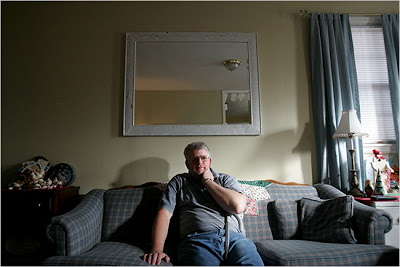 Ed Abney, of Berea, Ky., has Parkinson’s disease after two decades of working with a solvent. He has had trouble proving a link. Photo: Carla Winn for The New York Times.
Exposed to Solvent, Worker Faces Hurdles
By Felicity Barringer / January 24, 2009

BEREA, Ky. — When the University of Kentucky published new research in 2008 suggesting that exposure to a common industrial solvent might increase the risk for Parkinson’s disease, the moment was a source of satisfaction to Ed Abney, a 53-year-old former tool-and-die worker.

Mr. Abney, now sidelined by Parkinson’s, had spent more than two decades up to his elbows in a drum of the solvent, trichloroethylene, while he cleaned metal piping at a now-shuttered Dresser Industries plant here.

The university study had focused on him and his factory co-workers who worked near the same 55-gallon drum of the vaguely sweet-smelling chemical. It found that 27 workers had either the anxiety, tremors, rigidity or other symptoms associated with Parkinson’s, or had motor skills that were significantly impaired, compared with a healthy peer group. The study, Mr. Abney thought, was the scientific evidence he needed to claim worker’s compensation benefits.

He was wrong. The medical researchers would not sign the form attesting that Mr. Abney’s disease was linked to his work.

Individuals like Mr. Abney are caught between the conflicting imperatives of science and law — and there is a huge gap between what researchers are discovering about environmental contaminants and what they can prove about their impact on disease. The gap has ensured that only a tiny fraction of worker’s compensation payments are received by those who were exposed to harmful substances at work.

“It’s awfully difficult for any doctor or researcher to say to an individual: ‘You have this disease because you were exposed at this time,’ ” said J. Paul Leigh, a professor of public health sciences at the University of California, Davis.

How many people are caught in the same bind as Mr. Abney, “nobody really knows,” said Rafael Metzger, a California lawyer who specializes in cases involving diseases contracted in the workplace. 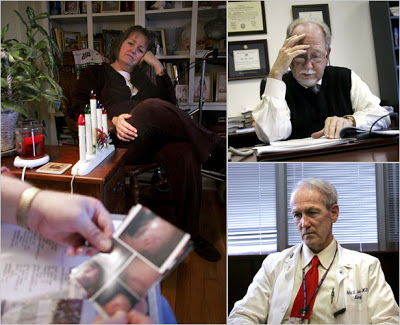 Anita Susan Abney watched her husband go through articles and pictures of his medical history. Dr. Don M. Gash, top, one of the researchers figuring in the case, and Dr. John T. Slevin, another. Photo: Carla Winn for The New York Times.

Trichloroethylene was nearly ubiquitous in American industry in the latter part of the 20th century. Production grew from to 321 million pounds in 1991 from 260,000 pounds in 1981, according to the Environmental Protection Agency.

The National Toxicology Program has declared that the solvent, also known as TCE, can “reasonably be anticipated” to be a carcinogen. It is a contaminant in drinking water in some areas of the country and is found in more than half the 1,430 priority Superfund sites listed by the E.P.A.

There was no question in Mr. Abney’s mind what he was working with.

“It was a good cleaner,” he said in an interview, his cane at his side. His wife recalled, “When he came home at night, he would say, ‘The smell is killing me.’ ”

Mrs. Abney sat next to her husband, with the fat files she has accumulated documenting aspects of his case — communications with doctors and with lawyers (all of whom left after the doctors refused to sign the forms).

Some of the paperwork documents the progression of Mr. Abney’s ailment: the day in 1996 when “on my left hand, a finger was twitching” or the day he could not enunciate the lesson to the Sunday school class he was teaching; and then, the day neither his hands nor his voice would perform his morning devotional rituals.

For five years, he received a series of diagnoses, including Lou Gehrig’s disease, amyotrophic lateral sclerosis, or A.L.S. Doctors at the Mayo Clinic in Jacksonville, Fla., correctly diagnosed his condition in 2001.

He left work and now receives federal disability payments of $1,200 a month. He was referred to Drs. Don M. Gash and John T. Slevin and joined a group of Parkinson’s patients involved in the testing of an experimental drug.

Mr. Abney mentioned that some of his co-workers also had neurological problems. Researchers mailed a questionnaire to 134 former Dresser workers; 65 responded.

Three, including Mr. Abney, had full-fledged Parkinson’s. The researchers found that of 27 others, 14 reported they had symptoms of the kind associated with the disease, and 13 others had significant slowing of motor responses or other symptoms of Parkinson’s.

A parallel study showed that feeding the solvent to rats resulted in injured neurons in the same area of the brain whose degeneration causes Parkinson’s in humans.

The conclusion, published in the Annals of Neurology in February 2008: “These results demonstrate a strong potential link between chronic TCE exposure and Parkinsonism.” But when it came to the specifics of Mr. Abney’s case, Dr. Gash said in an interview, “He started working at Dresser over 25 years ago, maybe 28 years ago. Trying to reconstruct what was going on then is just impossible.”

He added, “Certainly, we focused on one aspect of the toxins he was exposed to, but he was exposed to other toxins,” including agricultural pesticides or fumigants used to kill vermin at the plant.

Implicating TCE requires ruling out other potential causes, he said — something that could take years.

Which leaves few options for compensation. Dwight Lovan, Kentucky’s commissioner of worker’s compensation, said, “We are dependent on the scientific and medical communities for the element of causality.”

In other circumstances, proof of causality has been eased or waived. For instance, the Veterans Affairs Department in 2001 added Lou Gehrig’s disease to the list of service-related disabilities for Persian Gulf war veterans; in September 2008 it agreed to consider any service member who served for at least 90 days eligible for disability benefits if they later contracted A.L.S.

A crucial element of this decision, according to a veterans affairs official, was that the agency made no link between the onset of A.L.S. and a service member’s experience — whether exposure to the anthrax vaccine or the fires Saddam Hussein set in the oil wells under his control.

Kentucky officials do not have that option. In the workplace, as John Burton, an emeritus professor at the School of Management and Labor Relations at Rutgers University, said, “You still have the underlying requirement to establish that the workplace was the cause.” Because the burden of proof is so high and the relative benefits are so low, lawyers have little financial incentive to take on a case like Mr. Abney’s.

And scientists like Dr. Gash have little enthusiasm for working with lawyers.

E. Donald Elliott, a Yale Law School professor specializing in these cases, said that simply being exposed to a risk in the workplace “should in itself be a compensable injury.”

“You don’t have to prove you got the Parkinson’s because of the exposure,” Professor Elliott said. “From a policy standpoint, does it make sense for the entire burden of uncertainty or unknown science to fall on the injured parties rather than falling on the business or industry involved?”

For Mr. Abney and his wife, the disappointment still rankles. “You read this study and you hear about it and it builds you up,” he said. “And then you get let down. You get to where you just don’t care.”

1 Response to The Conflicting Imperatives of Science and Law