The list I’ve posted here barely scratches the surface of what the Rocky Mountain News dug out of the public record. I note that this article was published on 12 May, but it is still very timely information. Such notables as Lockheed Martin, Anheuser Busch, Coca Cola, State Farm Insurance, Google, Xerox, Lilly, and a myriad of other giant corporate interests are listed. Click the link below for the complete list. It is enlightening. Remember, these are the guys who are represented at the Democratic convention. Try checking the lists for the Green Party or the Socialist Workers’ Party. I’m just sayin’ … 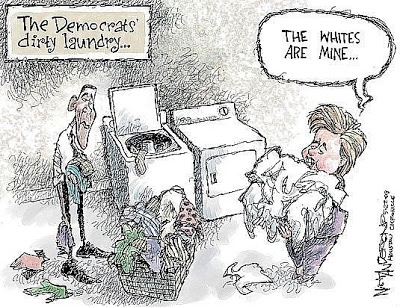 The Democratic Convention Host Committee has released a list of sponsors that includes some of the biggest companies in the nation, and most of them have business with the federal government or long lists of issues they are trying to influence on Capitol Hill.

Below are the sponsors’ names, followed by their federal business interests or lists of issues they are trying to influence through lobbying, according to the most recent Lobbying Disclosure Act forms available from the Senate Office of Public Records.

Note that a company’s “interest” in an issue could mean advocating either support or opposition, although that is not always indicated in lobbying forms.

Read all of it here. / Rocky Mountain News

This entry was posted in RagBlog and tagged Democratic Convention, Lobbyists, Presidential Campaign. Bookmark the permalink.

1 Response to The DNC Sponsors List Is Rather Enlightening