The Earth : Love it or Lose it, Part II 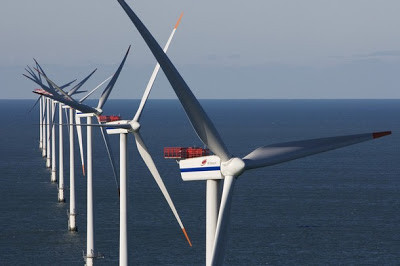 [This is the second in a series on The Rag Blog by Paul Spencer and others that will take a serious look at the threatened ecology of the earth and explore ways to address the problem. Paul Spencer is a former Austin activist and staff member of sixties/seventies underground newsppaper The Rag, who has been running for president as a way of addressing the serious issues facing our society and the world. Paul’s first piece was To reinvigorate the quest for clean air.]

By the most generous interpretation of the federal Department of Energy budget, in the terms that most of us understand under the rubric of “renewable energy sources”, the U.S. is spending substantially less than $1 billion per year on related research and implementation. The U.S. government also supports related development via a modest income tax credit that depends on the level of the taxpayer’s investment in the installation of covered devices.

China is spending more than $10 billion per year on wind- and solar-based energy for the next 12 years. (Interesting comparison: China spends less than 10% of the amount that the U.S. spends per year for “defense”, but spends more than 10 times as much on renewable energy. I know – “go back to China”. No thanks; I have lived here for my whole life, and I think that I will stay.) Japan and Germany and Taiwan and Spain and India and New Jersey and California offer billions of dollars in incentives per year for private industry to develop, manufacture, and install such systems (primarily solar-based). Now the other four far-west U.S. states are joining California in government-supported development of both the industries per se and applications of their products.

Ten years ago GE was the premier photovoltaic cell manufacturer in the world in terms of total power-generating capability manufactured per year. Today, GE is not close to the top 10. Four manufacturers in this group are Japanese companies, three are German, one is Chinese, and one is Taiwanese. The remaining company in the top 10is BP Solar, son of B(ritish) P(etroleum). Chinese manufacturers were virtually non-existent three years ago, but they have already passed U.S. manufacturing capacity and will – in fact – soon dominate the field.

By far the largest wind-power system manufacturer is Danish with a large – and growing – number of competitors from all over the globe. With respect to this segment of the renewable-energy-generation industry, we are primarily consumers. Some of our utilities – mostly private, for-profit utilities – are buying and installing these machines. A northwestern utility (PGE) is developing a “wind farm” in north-central Oregon that is projected to supply 10% of their electrical energy sales at completion. Huge cylinders and blades are being trucked along Interstate 84 to a huge wind-generation project in Wyoming. There are plans for massive developments in California and Arizona. West Texas is the current wind-generation capital of the country; the big towers sit out there in the mesquite and sage where the oil-drilling derricks were once ubiquitous.

The upshot of the level of national government support and investment is that the U.S.A. is currently the bobbed tail of the dog; and we are not wagging that dog, either. As the current occupation of Iraq attests, the Bush administration is almost exclusively focussed on petroleum-based energy production to the near-exclusion of renewable resources. In the face of intelligent and increasing interest and support from many state governments, the federal government offers a piddling tax credit to consumers, melded with more breaks for the fossil-fuel-related industries.

The good news is that there is apparently a large contingent of U.S. companies – plus some cases of university-supported research partnerships – that are pursuing improved-conversion-efficiency, lower cost, more versatile photovoltaic devices. Even in the wind-power industry, which is generally considered a fairly mature field, there is an interesting development that tries to use the aerodynamics of roof configurations to power a vertical-axis generating system. Four advantages that are immediately apparent are: 1) no tower; 2) more visibility for birds; 3) less structural-integrity issues; and 4) small-scale, localized deployment. 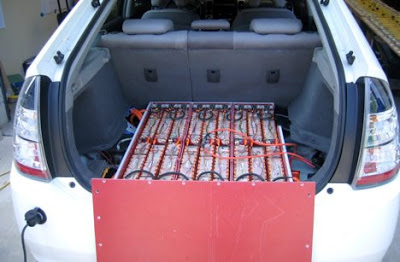 Nissan with a lithiam-ion battery.
Another related field that shows rapid and promising technological development is energy storage. There are several recent patents which cover what some call “hyper capacitors”. This is a kind of mechanical storage of electrons, rather than the chemical storage that we associate with batteries. And in the battery arena lithium-ion batteries are now in production for many applications with further development – especially in terms of safety – proceeding quickly. At least one of the solar-based heat-to-steam-to-turbine-to-electricity systems uses a fluid that is heated to a temperature well above the boiling point of water, so that sufficient fluid, plus insulated storage for that fluid, allows electrical generation to occur after the sun sets for the day.

Conservation of energy is not considered a renewable resource, but it is an essential component of energy policy, so I’m going to blend it into this paper. The largest effect in the shortest time interval can be obtained by: 1) increasing fuel efficiency standards of motor vehicles; 2) insulating and weather-proofing older houses; 3) exchanging incandescent and halogen types of lighting for fluorescent (and soon, LED) “bulbs”; 4) increasing the use of car pools and mass transportation…. Of course, conservation is a mature policy, and it has already been proven to have good effect in the 1970s and 1980s. Seems like a good time to re-enlist in these programs in a serious and comprehensive manner.

There are some relatively new developments in energy efficiency (a form of conservation) to discuss, too. The technology is not new in the case of ground-source-heat-pumps (water-to-air), but improved system designs and the relevant support data are relatively recent. Essentially, the average efficiency improvement for GSHP is on the order of 30% against air-to-air (standard) heat pumps and 70% vs. electric resistance heating. New residential and commercial construction are the best applications in the short run, because the infrastructure (wells or trenches) costs can easily be accomodated in the construction process. The actual dollar savings on energy consumption typically run higher than the additional mortgage costs for the system, to the extent that the return-on-investment for the system per se runs between 2 to 10 years.

Another “old” solar-based energy system is water heating via rooftop collection. The news here is that we don’t need the heavy, clumsy, material-intensive systems that proliferated in the 1970s. The latest approach is black plastic mats of built-in, small-diameter tubes that are freeze-resistant, light in weight, low in cost, and easy to install. This is actually one of the most efficient forms of heat-energy capture from any source.

Some of the other technologies, such as wave-based generation of electricity, hydrogen-based fuel systems, Stirling-type heat engines, solar concentrator, and unknown inventions of the future, may be pie-in-the-sky-bye-and-bye; but we should be funding research if for no other reason than “it looks good on paper”. How else does new technology develop? Somebody dedicates time and money to an idea.

So – we have a lot of invention and a fair amount of implementation. But we lack the focus and commitment that will get us out of our “petroleum addiction”. How come? I read a recent poll that said to me that 80% of our adult population supports kicking the oil habit and deploying many of the systems described above. As the situation in Iraq implies, however, we are governed by a group that wants to control and sell as many gallons of petroleum as possible. For the petro-pushers any gallons sold by Iraq to the French (pre-invasion situation) are dollars lost to Exxon, Chevron, and BP. Any gallons sold by Iran to the Chinese (current situation) are, also, dollars lost to the Anglo-American oil oligopoly. If renewables become the salient energy source, there is an automatic delay in the wealth transfer to the oligarchs – which is a good thing in my opinion.

Of course, the only domestic solution to this problem – i.e., the greed of our oligarchs – is political. Electoral politics is the solution of choice. We need to: 1) promote renewable energy systems; 2) finance system implementation; 3) support related research; and 4) eliminate tax and other government-sponsored advantages enjoyed by the petroleum and coal industries. The world – the U.S.A. in particular – will be a better place when the Sun’s radiation and related terrestrial phenomena warm us, cool us, and transport us to a major degree. It’s within reach and just needs our political will to be a congenial destiny.

Part I of The Earth : Love it or Lose it.

1 Response to The Earth : Love it or Lose it, Part II