The Earth : Love it or Lose It 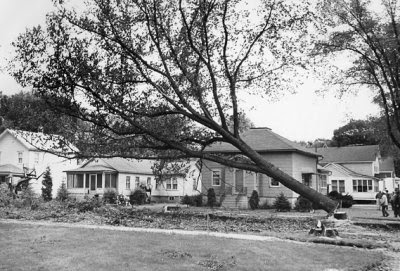 The devastation of Dutch Elm Disease — metaphor for an ailing earth?
Before it’s too late…
To reinvigorate the quest for clean air, soil, and surface water by strengthening regulation and expanding rehabilitation
By Paul Spencer / May 8, 2008 / The Rag Blog

[This is the first of a series on The Rag Blog by Paul Spencer and others that will take a serious look at the threatened ecology of the earth and explore ways to address the problem. Paul Spencer is a former Austin activist and staff member of sixties/seventies underground newsppaper The Rag, who has been running for president as a way of addressing the serious issues facing our society and the world.]

When I was about seven (1952), my mother, brother, and I travelled by train from Dallas, Texas to Buffalo, New York. We left the blue sky and bright sunshine of Dallas and ran through the night to St. Louis. In the morning I looked down, as we crossed the Mississippi River, and noted the character of this wide and brown river with its dense river traffic and smoke stacks lining the river banks. Then a strange smell began to permeate the atmosphere in the train. It became extremely irritating. It was, I was told, the normal atmosphere of East St. Louis, Illinois.

We were still somewhat elevated as we entered the city. The place itself lay like a gray cemetery below and to the north of us, and there was a brown pall above it. I was glad when we were leaving the city and the smell behind us, as we headed into the Illinois countryside.

I don’t remember much more of the trip, until we reached the Buffalo area. Buffalo itself was as red-brown as East St. Louis was gray. It was like a patina on the brick buildings. The smells were comparatively subdued and very varied. As we headed north through Lackawanna, there was an almost metallic smell in the air; as we reached the Buffalo harbor area, there was the smell of grain, both fresh and roasting.

Eight years later, we were living in the Buffalo area. Elmwood Avenue, Delaware Avenue, Linwood Avenue were relatively wide boulevards overhung with 70-feet-tall Elm trees. They were tunnels of cool green for at least six months of the year. Lake Erie was a recreational focus – fishing, swimming, boating. Everybody in the town was busy and working hard – except, of course, the county road crews.

In 1966 I stayed in the area for six months. I went to work for the South Buffalo Railway, which was a captive service for the Bethlehem Steel plant in Lackawanna. One of our jobs was to pull the big slag pots from the back of the converters and dump the slag. The slag pots were inverted bells, hung by trunnions, one per short railcar. We would push them up a long, sloping hill – of slag – to the top, where a very large track-type crane would smack the slag pots with a wrecking ball, until they tipped over. The red-hot slag would tumble down the side of this slag hill into Lake Erie. It was quite a nice show at night.

Five years later, I came back for awhile. The Elms were two-thirds gone due to Dutch Elm disease; the Lombardy Poplars were dying en masse; fishermen were saying that the fish were disappearing from Lake Erie; the city was turning gray; the sky was turning gray-brown; and the county-crew-syndrome was spreading to many other segments of the workforce.

About that time, the federal Environmental Protection Agency was initiated. Studies were begun, and pretty soon we were hearing that: yes, Lake Erie is “dying”; yes, the local air quality is bad for people; yes, Bethlehem Steel is polluting the lake. Not too long after that, they “discovered” a huge toxic dump under a housing development up toward Niagara Falls, called Love Canal. 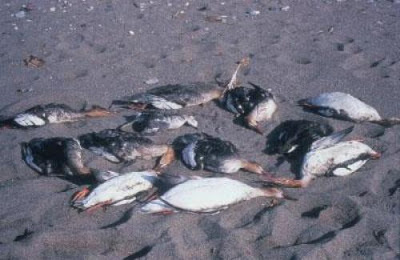 Type E Botulism, Lake Erie, 1999: Red-breasted Mergansers dead of Type E Botulism. Photo I.K. Barker
By the time that I left in 1979, there was hardly an Elm or a Lombardy Poplar to be found; the Sugar Maples were starting to die; Lake Erie was called “dead”; the population was declining; the sky was brown; and the county crews – among others – were being laid off permanently. That was my main environmental-destruction history, and I’m sure that most of you have experienced your own. One of the most amazing features to me was the speed of deterioration. It seemed that, if you blinked, something else was declining, dying, or dead.

There have been improvements in the Western New York area since then. Some fish species have re-established themselves in Lake Erie; the Sugar Maples have survived; the streams in the Northeast U.S.A. are not as choked with crud and algae and dead fish; the remaining population has found more employment; and the sky is not quite as brown as it was in 1979. More broadly, many species of trees are well established as replacements for the American Elms; songbirds and waterfowl are increasing in many areas; and most Rust-belt cities’ atmospheres are not laden with levels of noxious exhaust fumes as high as those of the late 1970s.

Of course, much of the basis for these improvements is the facts that: U.S. Steel in Gary, Bethlehem Steel in Buffalo, and Republic Steel in Cleveland are gone; many industries have moved manufacturing operations to foreign plants; exploitation of natural resources has declined within the contiguous 48 states; and international competition has caused improvement in the fuel-efficiency of cars and trucks. (Are these good developments? Yes and no.)

Other important factors mostly derive from regulation by government agency. Laws and regulations promulgated by the EPA (established in 1970), state environmental/ecological agencies, and some local authorities have protected species and habitat, promoted recycling, and mandated mitigation – both by device and by remediation. (Are these all good developments? Almost without exception.)

Where are we now in this situation? Just looking at the Pacific Northwest, there are tons of PCBs in and out of drums buried in Hamilton Island just below the Bonneville Dam on the Columbia River. There are many tons of radioactive waste water – and who knows what else – leaking into the water table under the Hanford reservation. The old Portland harbor area is a Superfund site (essentially inactive due to lack of funds). Wild (non-hatchery) salmon are barely hanging on. And the list continues ….

Where could we be, given the right spending and legislative priorities? We can:

1) Finish remediation of the 375 Superfund sites that are known to “degrade or threaten either groundwater or human health” before the next presidential election cycle (2012);

4) Increase the promotion of solar, wave, and wind-based power systems via increased tax credits, low-interest loans, and net-metering (at a minimum, the California model);
5) Research nuclear fuel recycling, as done in France;

6) Replace all applicable lighting with fluorescent systems or, better yet, LEDs (and establish local recycling sites for these devices);

This is a short list. It is merely one possible (beginning) set of projects. We have much more that we can and must do. Exciting, isn’t it – and eminently doable. One overlying question requires discussion: Is it necessary to virtually eliminate manufacturing and resource extraction to regain ecological balance? My answer is “definitely not”. Much of the current adversarial relations between environmentalists (in the organized, committed sense of the word) and industry (read primarily “corporations”) is due to the dynamics of negotiation-of-position in a market context. Simply put, the average environmentalists’ position (not the preservationists’ wishlist) is the reasonable position. Having said that, there are sustainable levels and methods of logging, mining, grazing, road-building, irrigation, dam-building, wind-farm development, etc. to be encouraged and protected. Ecological concern must include the ability of people to build a reasonably secure and comfortable life – albeit in the context of decreasing the stress on the rest of the ecosystem. We human beings are part of the environment, too.

This entry was posted in Rag Bloggers and tagged Ecology, Environment, Social Action. Bookmark the permalink.