The Economy : A Throw of the Dice 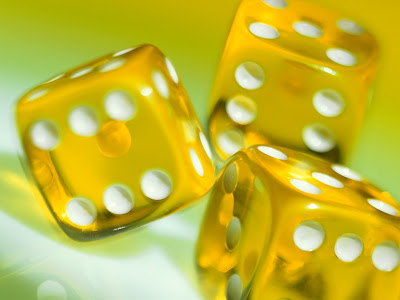 This article following these comments is a judgment by Mark Gongloff of the Wall Street Journal about “how bad” the US economy might get.

This is as seen by capitalist expansionists who are mostly blissfully unaware of the pervasive implications of resource depletion, and peak oil. While meanwhile ignoring the slowly worsening but unavoidable impact of climate change on many agricultural commodities necessary to feed the world.

Where are the economic scenarios below in error, IMO?

First of all the odds presented below have no credible basis as anything but unattributed guesses of the writer, devoid of much supporting evidence or numbers. Averaging the opinions of economists and a focus on the short term does not lead to important economic insights.

The recent drop in the price of oil from about $147 to $130, referenced below, appears to be more than anything an indication of the short-term speculation factor affecting oil price. This is the short term psychology change among traders during one week or so, rather than a reflection of long range global supply and demand
trends, which have been raising oil prices fairly steadily for about a decade.

If we look at the “Stagflation” scenario below, there is no discussion of the fact that rising oil demand is unavoidably forcing cost-push inflation into the commodity sector of the US economy while simultaneously deflating the discretionary spending sector. The federal interest rate remedy for the one problem tends to worsen the other.

More money spent on gasoline and the diesel needed to deliver food means less dollars spent at the movies and Starbucks and vacations. The falling profits in the discretionary sector like tourism and housing demand forces federal bank bailouts, due to the many trillions in credit default swaps and derivatives pervading the global economy.

These newly minted Wall Street bailout dollars are needed to inject liquidity and prevent an economic domino collapse effect. But these dollars then tend to gravitate toward the more profitable commodity sector of the economy rather than the depressed sectors like housing, worsening the cost-push inflation.

When commodity price inflation exceeds the US interest rate, the global economy tends to dump and thus devalue dollars, further worsening US inflation, and forcing even more bailouts. This steady increase in fiat currency, its inflationary effect and subsequent devaluation, can trigger a sudden panicky flight from dollars resembling a global bank run.

Let us now focus on the last scenario below, titled “Just Getting By” which is given 2 to 1 odds, This is proposed to be by far the most likely scenario:

…”We can keep muddling along, but we may have to accept more inflation and more weakness and adapt to that,” says Bruce McCain, chief investment strategist at Key Private Bank in Cleveland…

Thus this favored last scenario of price inflation plus a weak economy turns out on close inspection to be nothing more than a relabeled and weaker version of the “Stagflation” scenario above it. But without the numbers or a cause and effect analysis to distinguish the two scenarios.

The missing factor linking all the scenarios is the primacy of world supply and demand for oil. The global economy, structured as we know it, cannot expand without the cheap portable energy that has stimulated global population and economic expansion for most of the last century. When all is said and done, the global economy cannot expand without decades of restructuring to replace cheap oil as a primary dependency factor.

But for this transition to be made assumes that general resource depletion, global warming, and social and political calm will cooperate to allow what is bound to be a painful and slow restructuring process involving a new global energy infrastructure. A transition that is unlikely to be in harmony with the past few decades of rapid growth of the global economy.

A full year into the miserable journey of the credit crisis, the economy and financial markets have come to a crossroads, beyond which lay several possible destinations, not all of them pleasant.

So far, despite bank losses of some $400 billion, a crumbling housing market and oil prices at $130 a barrel, the economy has managed to avoid a deep recession — at least according to the common definition, which is two quarters of negative gross domestic product growth.

But federal tax-rebate checks have supported consumer spending, which drives 70% of the U.S. economy. That jolt will soon fade, potentially leading to a hangover.

A resilient export sector — driven by a weak dollar that makes U.S. goods cheaper and more competitive overseas — has also kept the economy going and lifted the profits of many multinational corporations. But several big overseas economies are starting to feel the bite of inflation and the troubles in the U.S., and their appetite for American goods might wane.

As heartening as last week’s turnabout in oil prices was, however, the economy is still a long way from healthy. And there could be a lot more stock-market pain to come.

Where do we go from here? Here are the main scenarios most economists and analysts are considering.

Remember “That ’70s Show”? We could be in for a rerun. Oil and other commodity prices rise relentlessly, spurring runaway inflation not seen since the 1970s. All the while, growth stays weak, a double dose of misery that crushes corporate profits and stock-market returns. There’s a word for this: stagflation.

Fortunately, the odds of this history repeating itself are slim. Inflation readings are nowhere near as high as they were in the 1970s and early 1980s, when the year-over-year percent change in the consumer price index soared as high as 14.8% at one point; it was up 5% in June.

And a key driver of that era’s hyperinflation is missing: In those days, strong labor unions were able to wrest wage increases at every tremor of the inflation rate. Companies passed their higher labor and energy costs to consumers in the form of higher prices, which encouraged still more wage increases, in a grim dance economists call a “wage-price spiral.”

Today workers have much less bargaining power, and wages haven’t kept up with inflation. That hurts consumers and the economy, but it will at least keep inflation in check.

One wild card: If the U.S. dollar continues to weaken, then that could keep inflation going despite the lack of a wage-price spiral. “This would be checkmate for the U.S. economy, turning a relatively mild recession into a severe one,” Paul Kasriel, chief economist at Northern Trust, told clients recently.
Odds: 20 to 1 against.

One word — Japan. If stagflation is the world ending in fire, then this scenario is Apocalypse by ice. Some observers worry the U.S. is following a path Japan blazed in the 1980s and 1990s. Like the U.S., Japan had stock and real-estate bubbles fueled by easy credit.

The aftermath for Japan was a “lost decade” for its economy and stock market, an especially terrifying time for policy makers because there seemed to be little they could do to fix it. Low interest rates were useless because nobody wanted to borrow.
The likelihood of this scenario is not high, either. Unlike Japanese officials, who waited for years to try to stimulate Japan’s economy, the Federal Reserve, the Treasury Department and Congress have responded quickly with rate cuts and stimulus packages and won’t hesitate to break out more, if necessary.

What’s more, Japan tried to keep its troubled banks alive, creating “zombie” institutions that only extended the pain of the financial crisis. U.S. officials are well aware of this history and will likely avoid it — though some analysts warn they’ve merely kicked problems down the road by preventing the collapses of Bear Stearns, Fannie Mae and Freddie Mac.

Next Year, the Turnaround

Like Chicago Cubs fans always looking to the next season, there are analysts who have been calling for a turnaround for months despite evidence to the contrary, yelling their hearts out for what so far has been a losing cause.

According to their theory, this has all been a fever dream, a midcycle slowdown like the one the economy suffered in 1998, when stocks briefly swooned, but the technology bubble quickly went right back to inflating. This is the same crowd who dismissed the collapse of the housing market because it’s just a small part of gross domestic product and who said the subprime mortgage meltdown would be no big deal.

And now, $400 billion in losses and one bear market later, they’re still calling for the rosy outcome, and there’s a chance they might be right, given the fiscal and monetary stimulus flowing through the system. Perhaps banks, emboldened by a wide government safety net, will start lending again to consumers and businesses eager to borrow and get back to the high life. This, along with the still-booming export sector, could cause the economy and stocks to rocket higher once again.

Unfortunately, this also seems unlikely. “This financial crisis is the worst since the Great Depression,” points out New York University economist Nouriel Roubini. “The recession is unavoidable at this point.”

One wild card here is the U.S. consumer, the lifeblood of the economy. Though their debts are growing and their inflation-adjusted wages are not, analysts have unsuccessfully predicted a slowdown in their spending for years. A dramatic plunge in oil prices could give them extra incentive to spend.

If you’ve enjoyed the economy for the past year, then you’ll love this, because it involves more of the same. The trouble is that most people haven’t enjoyed it, but it’s the most likely outcome, according to many economists.

In this scenario, weaker global growth cools inflation, but not by much, as China, India and other emerging economies stay hungry for oil and other commodities.
The U.S. economy improves little and perhaps slides into a mild recession, as the repercussions of the credit crunch, housing-market collapse and high oil prices work their way slowly through the system.

Banks, stung by hundreds of billions of dollars in losses and under pressure to rebuild their coffers, keep a tight lid on borrowing. Businesses, squeezed by higher costs and lower sales, lay off more workers, raising the unemployment rate.
“We can keep muddling along, but we may have to accept more inflation and more weakness and adapt to that,” says Bruce McCain, chief investment strategist at Key Private Bank in Cleveland.