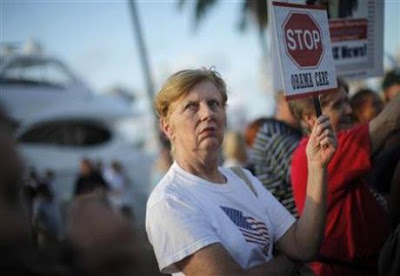 From the teabag front: A resident of south Florida holds a sign protesting health care reform. Photo by Carlos Barria / Reuters.
The health care fight goes on:
Teabaggers, downsizing, and the ‘Party of No’

The AP recently reported that the Democrats are discussing a smaller health care bill. The Massachusetts senatorial election has given our elected representatives an opportunity to reflect and perhaps consider a more concise, more progressive, health care bill — especially considering that many in the House take strongs issue with the Senate’s legislative monstrosity.

Rep. Jackie Spier, D-Calif., describes the Senate bill as “toxic.” It’s a bill that could easily have been written by the Republican Party in deference to their corporate supporters. It was, of course, sponsored and voted for by a group of cowardly Democrats who place their relection above the needs and desires of their constituency.

In the meantime we can step back and view the battlefield. Foremost in the public view at the moment are the teabaggers, who follow their corporate-financed pied pipers at every turn. I have had conversations with several Europeans who are thunderstruck by the antics of these folks. I am asked, “Where but in America would masses of people publicly exhibit such pride in their ignorance?” I have been tempted to answer with the words of Pascal:

Instead, I merely point to the puerile, testosterone driven commercials shown during the Super Bowl Game. The agencies that produce these horrid ads must imagine the average I.Q. of the viewer to be in the low 80s. Sadly, perhaps they are right.

The game goes on with President Obama’s scheduled “open” meeting with the Republicans regarding health care — if they accept his invitation to appear on CSPAN. We only hope that the President will be resolute and open with the “Party of No” rather than once again descending to the absurdity of “bipartisanship” with the demagogues who are out to destroy his presidency.

Hopefully, he and his staff will finally remember that the people elected him to represent their interests and not those of the corporations. And hopefully, Mr. Obama will give unqualified support to the labors of the House of Representatives, and will include a “Medicare for All” option. Looking back in time, it took courage and foresight for the people’s representatives to pass the Social Security and Medicare bills. But then, they did not cower like whipped dogs or pay deference to the blue dog-types. Instead, they followed their moral and ethical beliefs.

Of course, the Republicans would love to do away with these programs in the name of “fiscal responsibility.” The American people did not elect Obama and a progressive Congress to merely defer to every wish of the Liebermans, the Bayhs, and the Lincolns. Yes, we might lose the final vote but it will show the American people who their representatives are and which of our Senators and/or Representatives are in Washington to accept baksheesh from their corporate sponsors.

The Raw Story reported that the Democrats might even be ready to drop the proposed ban on pre-existing conditions, making such a provision only applicable to those under the age of 19. This would further weaken the farcical Senate bill which at least now provides insurance for those with pre-existing conditions — but at three times the cost of those not so judged. Remember, as well, that the Senate Bill provides financing by taxing the middle classes, rather than the wealthy, and that much of the coverage will not take effect for 3-4 years.

Recent polling by Health Care for America Now, as reported by The Huffington Post, showed that 64% oppose a mandate requiring the purchase of PRIVATE insurance, as is included in the Senate bill; however, 60% support a mandate if it allows for the purchase of private OR public insurance. 63% of likely voters supported an option to buy into a government-run Medicare-like program. Even 23% of Republicans approved of such plan.

Once again I must stress that most of the discussion about health care reform has largely excluded the physicians; our political leaders have not listened to those who actually care for the sick, instead paying deference to the health insurance and pharmaceutical industries. Some might counter that the AMA was consulted. But I will again point out that the vast majority of physicians are not affiliated with the AMA, which traditionally has represented the interests of the pharmaceutical and insurance industries.

I recommend that everyone read a letter from Quentin Young of the Physicians for a National Health Program that was distributed by Common Dreams, written from the viewpoint of the physicians. Dr. Young discusses at length the need for Medicare for All. And it is important — as has been emphasized by the American College of Physicians — that any proposed bill, as well as the Medicare budget, provide for adequate fees for primary care physicians, including general practitioners, internists, and pediatricians.

As to the bogus abortion issue, I have followed Physicians for a National Health Program since their founding in 1988. Never in their literature have I seen the word “abortion” mentioned in any context. PNHP has been purely interested in addressing physical and emotional illnesses like cancer, heart disease, diabetes, and pneumonia. Any health care bill should be written to provide for the ill and the infirm. Let us consider the contentious issue of abortion in another forum and not allow it to distract from the very real and pressing matters at hand.

On the reform scene, there has been encouraging news and discouraging news. The California and Connecticut legislatures passed bills providing for universal health care within their states; however, in each instance a Republican governor has overturned the public’s will by vetoing the legislation. Pennsylvania appears on the brink of passing a universal health plan — the Democratic State Committee unanimously approved such — and there appears to be support in the state legislature and Governor Rendel has indicated he will sign it.

The fight for real health care reform goes on; there is still have much work to be done.

2 Responses to The Health Care Wars : Viewing the Battlefield