The High Cost of Waste in Our Society 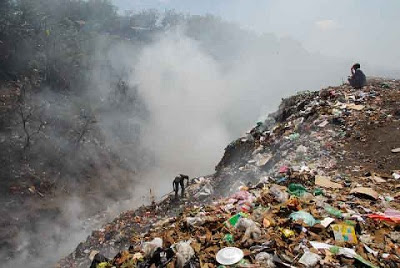 Editor’s Note: This is a report from a survey carried out in England and Wales. The BBC report does not mention this in the context of famine now being predicted in some developing countries due to rising food and fuel prices. This is the first survey of its kind ever conducted. Considering that the report is only referent to a small portion of Europe, we have to ask how much food is being wasted every day, worldwide. 3 billion people are still living on a dollar a day in a world dominated by the capitalist model. This is an incredible indictment of the world food pricing and distribution system and hence capitalism itself. – LMB

People are needlessly throwing away 3.6m tonnes of food each year in England and Wales, research suggests.

The Waste & Resources Action Programme (WRAP) found that salad, fruit and bread were most commonly wasted and 60% of all dumped food was untouched.

The study analysed the waste disposed of by 2,138 households.

Environment Minister Joan Ruddock said the findings were “staggering” at a time of global food shortages and WRAP added it was an environmental issue.

The study found that £9bn of avoidable food waste was disposed of in England and Wales each year.

It is mostly food that could have been consumed if it had been better stored or managed, or had not been left uneaten on a plate.

Much of that food waste goes into landfill rather than into council food disposal and composting programmes, it said.

“There are climate change costs to all of us of growing, processing, packaging, transporting, and refrigerating food that only ends up in the bin.” – Joan Ruddock, Environment Minister

Based on the data for England and Wales, WRAP estimated that householders across the UK throw away £10.2bn of avoidable food waste every year.

Using the same extrapolation, they also estimated the average UK household needlessly throws away 18% of all food purchased. Families with children throw away 27%.

The study also suggested £1bn worth of food wasted in the UK was still “in date”.

Nearly a quarter, in terms of cost, was disposed of because the “use by” or “best before” date had expired.

“What shocked me the most was the cost of our food waste at a time of rising food bills, and generally a tighter pull on our purse strings,” Ms Goodwin said.

“It highlights that this is an economic and social issue, as well as about how much we understand the value of our food.”

The study also found that:

* Bakery goods made up 19%, by weight, of all avoidable food waste. Vegetables contributed 18%.

* Meat and fish also made up a large proportion – 18% – of the total money wasted on food. WRAP said 5,500 whole chickens were thrown away each day in the UK.

* Yoghurt was a commonly abandoned product, with an estimated 1.3m unopened pots disposed of each day.

The body says The Food We Waste survey is the first of its kind in the world, surveying both household habits and the actual waste they throw away.

The survey interviewed 2,715 households in England and Wales and several weeks later, analysed the rubbish of 2,138 of them.

Ms Ruddock said: “This is costing consumers three times over.

“Not only do they pay hard-earned money for food they don’t eat, there is also the cost of dealing with the waste this creates.

“And there are climate change costs to all of us of growing, processing, packaging, transporting, and refrigerating food that only ends up in the bin.”

This entry was posted in RagBlog and tagged Environment, Hunger, Sustainability. Bookmark the permalink.