The Japanese Use Less Energy, No Doubt 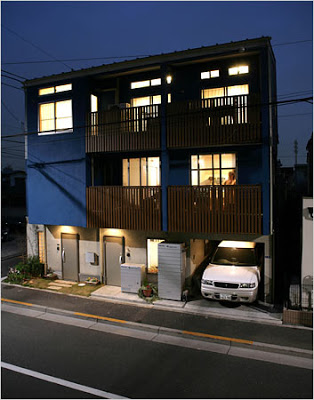 It is a rarity to see all the lights ablaze at Kiminobu Kimura’s home in Tokyo, where a fuel cell turns hydrogen into electricity and cold water into hot. The Kimura family heats very few rooms, and recycles its bath water. Ko Sasaki for The New York Times
The Land of Rising Conservation
By Martin Fackler

Rag Blogger Mariann Wizard passed this piece along and we decided to post it even though it’s from January of 2007. Fact is, that makes it even more remarkable.

TOKYO — In many countries, higher oil prices have hurt pocketbooks and led to worries about economic slowdowns. But here in Japan, Kiminobu Kimura, an architect, says he has not felt the pinch. In fact, his monthly energy bill is lower than a year ago.

A reason is his new home fuel cell, a machine as large and quiet as a filing cabinet that sits in front of his house and turns hydrogen into electricity and cold water into hot — at a fraction of regular utility costs. But even with the futuristic device, which is available for now only in Japan, Mr. Kimura has not let up on the other shortcuts that leave him unscathed by last year’s oil squeeze.

Energy-efficient appliances abound in the many corners of his cramped home. There is the refrigerator that beeps when left open and the dishwasher that is compact enough to sit on the kitchen counter. In some homes, room heaters have a sensor that directs heat only toward occupants; there are “energy navigators” that track a home’s energy use.

And then Mr. Kimura, 48, says there are the little things that his family of four does to squeeze fuel bills, like reusing warm bath water to wash laundry and bicycling to buy groceries.

Japan is the most energy-efficient developed country on earth, according to most specialists, who say it is much better prepared than the United States to prosper in an era of higher global energy prices. And if there is any lesson that Japan can offer to Americans, they say, it is that there is no one fix-all solution to living with oil above $50 a barrel.

Rather, as Mr. Kimura shows, it is a combination of many things, from the most advanced technologies to the simplest frugality in everyday life — and an obsession with saving energy that keeps his family huddled in a single heated room during winter.

Japan tops most global comparisons of energy efficiency in wealthy nations. Its population and economy are each about 40 percent as large as that of the United States, yet in 2004 it consumed less than a quarter as much energy as America did, according to the International Energy Agency, which is based in Paris.

Japan’s obsession with conservation stems from an acute sense of insecurity in a resource-poor nation that imports most its energy from the volatile Middle East, a fact driven home here by the 1970s shocks. The guiding hand of government has also played a role, forcing households and companies to conserve by raising the cost of gasoline and electricity far above global levels. Taxes and price controls make a gallon of gasoline in Japan currently cost about $5.20, twice America’s more market-based prices.

The government in turn has used these tax revenues to help Japan seize the lead in renewable energies like solar power, and more recently home fuel cells. One way has been a subsidy of about $51,000 for each home fuel cell. This allowed Mr. Kimura to buy his cell last year for about $9,000, far below production cost. His cell, which generates one kilowatt-hour of energy per hour, provides just under half of his household’s electricity, and has cut his electricity bill by the same amount, he said.

The device works by converting natural gas into hydrogen, which the fuel cell then uses to generate electricity. Heat released by the process is used to warm water.

The first two fuel cells were installed in the prime minister’s residence in April 2005. Since then, some 1,300 have been sold, according to the trade ministry. The ministry forecasts that as sales pick up, production cost will fall to about $5,000 by decade’s end. Experts say that Japan is far more willing to embrace new technologies than the United States, where opposition to hydrogen storage tanks in Tarrytown, N.Y., forced General Motors to scrap an experimental filling station for fuel-cell cars last year.

Higher energy prices have also created strong domestic demand in Japan for more conventional and new energy-saving products of all sorts. That has spurred the invention and development of things like low-energy washing machines and televisions and high-mileage cars and hybrid vehicles, experts say. Japanese factories also learned how to cut energy use and become among the most efficient in the world.

Companies like Mitsubishi Heavy Industries are now reaping the benefits in booming overseas sales of their highly efficient electric turbines, steel blast furnaces and other industrial machinery, particularly in the United States. The environment ministry forecasts that exports will help turn energy conservation into a $7.9 billion industry in Japan by 2020, about 10 times its size in 2000.