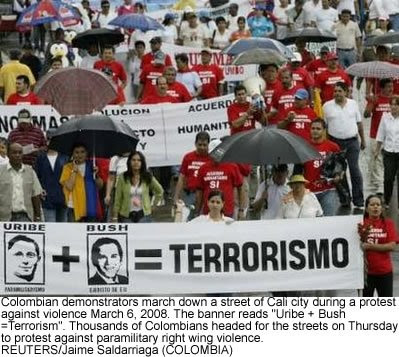 Latin American Crisis “Made In The USA”
By Bill Van Auken

07/03/08 “WSW” — – Nearly a week after Colombia’s cross-border raid against an encampment of the FARC (Revolutionary Armed Forces of Colombia) guerrilla movement in neighboring Ecuador, Latin America continues to confront its worst regional diplomatic and military crisis in decades. The US government and mass media have weighed in with unsolicited judgments and advice, attributing the tense standoff between Colombia, Ecuador and Venezuela to the threat of terrorism to Colombia, the complicity in terrorism on the part of Venezuela and overheated animosities between the respective heads of state of these three countries.

State Department spokesman Tom Casey declared that “it’s important to recognize that the events that took place were, in fact, a response to the presence of terrorists.” Similarly, White House spokeswoman Dana Perino affirmed that Colombia “was defending itself against terrorism.”

This official reaction extends to Colombia—Washington’s principal client state in South America and the recipient of some $600 million annually in American military aid—the mantle of the Bush Doctrine, which holds that in the “global war on terrorism” such niceties as respect for sovereign borders and international law no longer apply.

The Washington Post went a step further, calling the March 1 raid a “remarkable success” and accusing Venezuelan President Hugo Chavez and Ecuadoran President Rafael Correa of “backing an armed movement with an established record of terrorism.” It compared the strike on the FARC camp to US air strikes against Al Qaeda in Pakistan.

As for the air raid itself, Ecuador’s Defense Minister Wellington Sandoval reported the attack included the use of five “smart bombs” of the type utilized by the US military. “It is a bomb that hits within a meter of where it is programmed, from high velocity airplanes,” he said. He added that to target Reyes with such weapons, “they needed equipment that Latin American armed forces do not have.”

Both Washington and the right-wing regime in Colombia were determined to stop any further hostage releases in order to further efforts to politically isolate the Chavez regime and to enforce the Bush administration’s proscription against negotiations with “terrorists.”

At the same time, the bombs dropped on the FARC encampment were undoubtedly also meant as a message to Sarkozy not to meddle in Yankee imperialism’s “backyard.” It should be recalled that the French president, shortly after his election, sent his then-wife to Libya to consummate the release of six medical workers who had been held for eight years on false charges. This political coup managed to bypass the European Union, which had been negotiating the release, and paved the way for lucrative Libyan contracts for French corporations. Washington had no intention of seeing Paris pursue a similar path in relation to Venezuela, which constitutes the fourth largest source of US oil imports.

In the final analysis, this episode in the “global war on terrorism,” which has brought three South American nations to the brink of armed conflict, is the product of a filthy political murder carried out to defend the strategic and profit interests of US capitalism.

It is a reminder that “Murder, Inc.”—as the CIA became known during the 1960s and 1970s, when it organized numerous assassinations and assassination attempts, along with right-wing coups and dirty wars—is still very much in business in Latin America.

$300 Million From Chavez To Farc A Fake: Here’s the written evidence
By Greg Palast

This past weekend, Colombia invaded Ecuador, killed a guerrilla chief in the jungle, opened his laptop – and what did the Colombians find? A message to Hugo Chavez that he sent the FARC guerrillas $300 million – which they’re using to obtain uranium to make a dirty bomb!

That’s what George Bush tells us. And he got that from his buddy, the strange right-wing President of Colombia, Alvaro Uribe.

So: After the fact, Colombia justifies its attempt to provoke a border war as a way to stop the threat of WMDs! Uh, where have we heard that before?

The US press snorted up this line about Chavez’ $300 million to “terrorists” quicker than the young Bush inhaling Colombia’s powdered export.

What the US press did not do is look at the evidence, the email in the magic laptop. (Presumably, the FARC leader’s last words were, “Listen, my password is ….”)

I read them. (You can read them here.) While you can read it all in español, here is, in translation, the one and only mention of the alleged $300 million from Chavez:

“… With relation to the 300, which from now on we will call “dossier,” efforts are now going forward at the instructions of the boss to the cojo [slang term for ‘cripple’], which I will explain in a separate note. Let’s call the boss Ángel, and the cripple Ernesto.”

Got that? Where is Hugo? Where’s 300 million? And 300 what? Indeed, in context, the note is all about the hostage exchange with the FARC that Chavez was working on at the time (December 23, 2007) at the request of the Colombian government.

Indeed, the entire remainder of the email is all about the mechanism of the hostage exchange. Here’s the next line: “To receive the three freed ones, Chavez proposes three options: Plan A. Do it to via of a ‘humanitarian caravan’; one that will involve Venezuela, France, the Vatican[?], Switzerland, European Union, democrats [civil society], Argentina, Red Cross, etc.”

07/03/08 “Borev” — – What a relief! Latin America’s littlest strongman decided to “revise” his pledge bring Hugo Chavez up on charges of “genocide” and/or “terrorism” before the International Criminal Court. Venezuelan newspapers chalk it up to Uribe’s “democratic spirit,” but it probably had a bit more to do with “lawyers” and “dictionaries” and “a super dubious past.”

Anyway it got us thinking: What if the shoe were on the other foot? I mean, sure, back in the day Senator Uribe was considered to be one of the world’s top drug dealers, working for the Medellin cartel and being—how did U.S. intelligence put it?— “a close personal friend of Pablo Escobar.” But that was 1991, this is now, and surely we couldn’t hold a grudge going back to the early 90s (sorry just a little laptop humor!) Haha here at BoRev, we don’t need any miracle computer to tell you what a liberal democracy is made of. We’re kicking it analog after the jump.
For the record, Colombian paramilitaries are also listed as a terrorist group in the US and Europe. With that in mind, Uribe’s political allies alone make the FARC look like boy scouts. Por ejemplo:

>>> Fourteen of Uribe’s closest congressional allies remain behind bars for their terrorist links, and are slowly revealing where bodies have been dumped, leading to discovery of mass graves last spring.

>>> His foreign minister was forced to resign a year ago when her brother (a senator) was arrested for overseeing the killing of thousands of peasants. (Yeah that’s “thousands” with a “thu”)

>>> His campaign manager/secret police chief was jailed that same month for “giving a hit list of trade unionists and activists to paramilitaries, who then killed them.”

>>> His Army chief “collaborated extensively” with illegal death squads and, back in 2002, colluded in the massacre of 14 people for their supposed leftist politics.

>>> His Defense Minister “tried to plot with the outlawed private militias to upset the rule of a former president,” and

And of course our little hero gags newspapers from reporting on corruption, jails journalists without trial, gave himself the power to rule by decree, overrides Supreme Court decisions by fiat, refers to human rights monitors as “political agitators in the service of terrorism,” and amended the Constitution to give himself a new term. But other than that he’s a goddamned democratic beacon.