The Mexican Dilemma: Biofuel or Food? 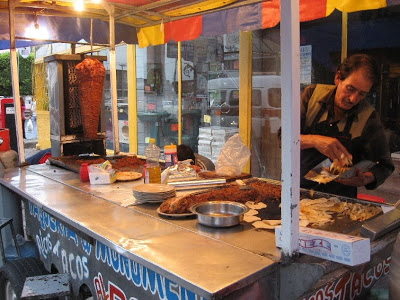 Street vendor in Mexico City. Critics of biofuels say they push up the cost of food.
Mexico’s gamble on biofuels
By Alberto Najar / June 26, 2009

Mexican authorities intent on tackling the issues surrounding the production of biofuels are faced with one fundamental question. Should they have clean air, or cheap food to feed the country’s poor?

In a country where, according to official estimates, 40 million people live in poverty and 30% of the maize consumed is imported, the answer not straightforward.

On the one hand there is the international commitment the government has made to promote the use of renewable fuels and to fight climate change.

On the other, environmentalists warn that producing raw materials for ethanol and biodiesel displace production of basic grains, especially maize, the staple of the Mexican diet.

“We could lose the ability to produce our own food,” says Raul Benet, a spokesman for the activist group Rostros sin Voces, or Faceless Voices.

But the undersecretary of agriculture, Francisco Lopez Tostado, flatly rejects that there is any kind of conflict.

And if there was, he tells BBC Mundo, “food would definitely prevail”.

Mexico has produced legislation to restrict the use of maize in the production of biofuels.

The grain can only be used if there is a national surplus and domestic demand has been met.

But those are conditions that have yet to be satisfied, acknowledges Mr Tostado.

So, faced with a collapse in its green energy strategy, the government has made changes that they hope will make it possible to both comply with its international commitments regarding biofuels and feed its poor.

One of those commitments is that by 2011 it will replace 2% of hydrocarbons used in three of the country’s main cities – Guadalajara, Monterrey and Mexico City – with green alternatives.

Instead of maize, officials are looking to produce ethanol from sugar cane or sea weed, for example, and biodiesel from palm trees or castor oil plants.

Experiments have been made with sweet sorghum, cassava and jatropha (or physic nut), that could be applied in the production of so-called second generation biofuels.

This is when vegetable waste is recycled to make the biomass used in the first stages of production.

There is a total of 145 projects being carried out to find the optimum raw material for the production of biofuels, according to Mr Tostado.

But environmentalists fear that a new Biofuels Bill, which is yet to become law, could risk opening the door to the inclusion of maize in the production of biofuels.

The undersecretary of energy, Jordi Herrera, dismisses that possibility, as the use of maize as raw material for biofuels is banned in Mexico.

“Nothing and nobody can be above the law”, he tells the BBC.

Since last year, the government has stopped financial support to projects that would be using maize in biofuel production.

In the north-eastern town of Sinaloa, two plants had already been built for that purpose. Now they will have to adapt so they can use different raw materials such as sugar cane.

So alternatives to maize are the key.

If Mexico succeeds in making fuel from these alternatives it may well manage to have it all: green energy and food for its poor.

1 Response to The Mexican Dilemma: Biofuel or Food?