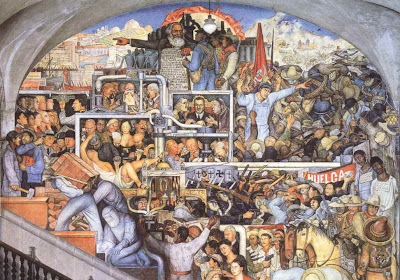 The manipulation of the genetic mapping of the indigenous peoples of Mexico is only one front on which Big Science aids and abets ethnic cleansing.

MEXICO CITY — When last May 11th, at the nadir of this spring’s swine flu panic, President Felipe Calderon strode to the flag-bedecked podium in southern Mexico City and, under the strictest health protocols, lowered his “tapaboca” (surgical mask) to punch the button that would load “The Mexican Genome” onto the world’s computers, the only thing that seemed to be missing was a military band to strike up the National Anthem.

The human genome is the ordering of genes in a determined set of chromosomes that contain all the genetic and hereditary memory of the human organism, i.e. the history of our DNA. Although distinct genomes have been decoded for racial groupings — European Caucasians, Asians, and Africans — science has never before been assigned to decipher the genome of a national state or nation which is, by definition, a political entity, and many here questioned the existence of a “Mexican Genome.”

Despite the nay sayers, Dr. Gerardo Jimenez, director of the National Institute of Genomic Medicine (INMEGEN) whose scientists did the gene mapping insists that the 89 deviations from genetic patterns found in other races, justifies the national character of the “Mexican Genome.”

Would a gene be discovered for electoral fraud and the corruption of public officials asked one letter-writer to La Jornada, the left daily, pointing out that, according to a government audit, half a million Yanqui dollars appears to have gone missing during the construction of the INMEGEN headquarters in the south of the city?

Calderon’s political opponents also questioned the timing of the announcement of the discovery of the Mexican Genome during a health crisis that had been tainted by his administration’s overreaction to the swine flu pandemic after a six-week delay in alerting the public to the contagion.

The president countered his critics by lauding the cost benefits that the decoding of the Mexican Genome would mean for public health care. Cost effective preventative medicines and treatments could now be delivered to confront the nation’s Number One killers, Diabetes, and Obesity. So-called “personalized” drugs would now be designed to deal with the health problems of the Mexican people. “Super Positive News!” read the crawl on the Univision report about the “Mexican Genome.”

But which Mexicans will be the beneficiaries of this cutting edge science? Mexico is, indeed, many nations. The vast bulk of the population — 80 million out of 103 million — are of mixed European and indigenous stock (65% of the genetic material identified in the Mexican Genome is listed as “Amerindian”). On the other hand, Mexico is home to 57 distinct ethnic groups or “peoples” (15 to 20 million, a fifth of all Mexicans) whose genetic make-up is distinct from the Mestizo population.

During a forum held this July at the National College to celebrate the publication of the Mexican Genome, Dr. Jimenez explained that INMEGEN scientists had rounded up samples from anonymous Indian donors — it is unclear if the donors knew what they were being swabbed for. Skeptical academics in the audience also wondered if drugs or treatments designed for the mestizo population would be accessible to Indian communities? Dr. Jimenez did not respond to questions about the sale or leasing of the Mexican Genome to transnational pharmaceutical giants.

“The Indians will contribute the prime material — their DNA — to enrich the pharmaceutical industry,” observes Silvia Ribiero, a biotech writer for La Jornada. “As usual, we will be excluded from the benefits,” adds Genaro Dominguez, founder of the National Coordinating Council of the Indian Peoples (CNPI), arguing that the Mexican Genome is a form of ethnocide.

The posting of the Mexican Genome raises critical ethical questions, Diego Valades, former Mexican attorney general and now dean at the National Autonomous University (UNAM)’s law faculty, posited at the July 2nd forum. Will indigenous peoples, the first Mexicans, be regarded as “unMexican” because their genetic sequencing differs from the mestizo norm?

Could the compilation of a separate indigenous genome be used to imply the inferiority of Indian Mexicans? The commercial implications of the Mexican Genome are troubling to Valades — the genome is commercial property and can be bought and sold by service providers. Could insurance companies, for example, up premiums for policyholders with bad genes?

The manipulation of the genetic mapping of the indigenous peoples of Mexico is only one front on which Big Science aids and abets ethnic cleansing. The contamination of native maize by transgenic corn and the forced privatization of Indian lands also place scientists in the service of ethnocide.

For eight millenniums, indigenous Mexicans developed and cultivated 300 families of native corn, each with properties designed for the soils and climates in which they were grown. Indian culture and civilization are indelibly entwined with corn cultivation — indeed the Mayans are “people of the corn”, literally made from maiz. “No hay pais sin maiz!” (“We have no country without corn!) is the battle cry of Indian campesino movements.

The penetration of transgenic corn into Mexico is the result of massive importation of biotech grains under provisions of the North American Free Trade Agreement (NAFTA). Some like Zapotec Indian leader Aldo Gonzalez consider the contamination of native corns by transgenic strains developed by U.S. biotech titans like Monsanto tantamount to genocide.

The discovery that genetically modified corn had been introduced into the rural Oaxaca outback in 2001 alarmed Zapotec farmers in the Sierra Norte, sometimes known as the Sierra of Benito Juarez because it is the birthplace of Mexico’s only Indian president.

Three years ago, at a forum in the state capital that brought together scientists from the three NAFTA nations to evaluate the impacts of the penetration of transgenic corn on the native crop, Gonzalez, a spokesperson for the Union of Social Organizations of the Juarez Sierra (UOSJS), shook a drying cornstalk at the distinguished panel and accused its member of nothing less than genocide: “the seed of the Zapotec people is our corn and when you kill our corn, you kill us.”

Recent non-government studies indicate that the incidence of transgenic corn has spread to maiz-growing regions in at least five non-contiguous states. The surge of transgenic corn threatens to overwhelm and homogenize native species and obliterate millions of years of genetic history.

Now the Sierra of Juarez is under siege from an unlikely coalition of U.S. scientists and the U.S. military. It seems hardly to be a coincidence that University of Kansas geographers working on a grant supplied by the U.S. Department of Defense have spent the past three years mapping the “human terrain” of Zapotec corn growers in the Oaxacan sierra.

The “Mexico Indigena” (sic) Project was launched in 2006 by geographers Peter Herlihy and Jerome Dobson and is underwritten by the Foreign Military Study Office (FMSO) based at Fort Leavenworth Kansas, the home of the United States War College. The FMSO is administrated by Lieutenant Colonel Geoffrey Demarest, a graduate of the School of the Americas and author of such pertinent texts as “Mapping Counterinsurgency.”

Technology and data processing for the Mexico Indigena Project is provided by Radiance Technologies, a Pentagon contractor that specializes in information gathering technology. Information gathered by Mexico Indigena will be made available to U.S. government agencies such as the Department of Homeland Security and its Customs & Border Protection branch.

Ever since the rising of the Mayan Indian Zapatista Army of National Liberation (EZLN) in Chiapas on the very night that NAFTA kicked in in January 1994 and the election of Aymara Indian leader Evo Morales as the first indigenous president of majority Indian Bolivia a decade later, the continent’s 60,000,000 Indian peoples have become a source of alarm for Washington strategists.

In Oaxaca, the Mexico Indigena Project is mapping the NIC’s global future.

Curiously, Mexico Indigena was launched in 2006 in two Sierra Norte villages, the same year as Oaxaca was torn asunder by the uprising of a broad coalition of grassroots organizations determined to remove the state’s despotic governor — the Union of Social Organizations of the Juarez Sierra was a prominent member of the Assembly of the Oaxacan Popular Peoples Organization or APPO. In the Mexico Indigena prospectus posted on line, Project director Herlihy boasts that his work “will illuminate important but neglected facets of these movements.”

The Oaxaca isthmus, which the Juarez Sierra borders, is the narrowest neck of Mexico separating the Pacific and Atlantic oceans by a scant 225 kilometers of mountainous terrain and has been considered a strategic passage for global trade between the east and the west for centuries — the isthmus has been an object of U.S. interest ever since Benito Juarez was Mexico’s president in the mid-19th century.

According to Aldo Gonzalez, Mexico Indigena geographers have violated their project’s stated ethical guidelines by gathering information on the human terrain of the Juarez Sierra by deception. Villagers testify that Herlihy and Dobson never informed the elders’ councils of the two villages being mapped that Mexico Indigena was funded by the U.S. military.

Nor did the two University of Kansas scientists divulge to their Zapotec informants that in 2006 they met with none other than General David Petraeus, now in charge of the Central Command and charged with running the U.S. wars in Iraq and Afghanistan. Petraeus, the author of the U.S. Marine corps counter-insurgency manual, complimented the Mexico Indigena Project’s goals: “understanding the cultural terrain is a force multiplier (for the U.S. military).”

But what the Mexico Indigena scientists did tell the Zapotec elders was that the mapping information elicited from their communities would be shared with the PROCEDE program, the Mexican Secretary of Agriculture’s agency that certifies the holdings of the nation’s 27,000 “ejidos” (villages organized as rural production units) and encourages farmers to privatize their plots.

Under neo-liberal revisions of Article 27 of the Mexican constitution, ejido farmers can now sell or rent their land or enter into “association” with transnational capital. Although Indian lands are held collectively, Gonzalez reports that PROCEDE agents try to convince Indian farmers to apply for ejido status so their land can be privatized. PROCEDE, in effect, converts Indian land into real estate.

By compiling a plot-by-plot map of the human terrain of the Juarez Sierra, the Mexico Indigena Project is committing “geo-piracy,” the Zapotec leader warns. The U.S. scientists locate and map natural resources and facilitate biological theft — bio-piracy, if you will. “The Mexico Indigena scientists are looting Zapotec knowledge of land and territories,” Gonzalez insists.

Privatizing Indian land is as much a facet of ethnocide as destroying native corn or submerging indigenous genes in a mestizo genome. Although science has learned to mask its homicidal intentions since the days when Lord Jeffrey Amherst distributed typhoid-impregnated blankets to Ottawa Indian rebels under Chief Pontiac and General George Custer decimated the Sioux, corporate scientists continue to serve the interests of Indian genocide.

[John Ross’s El Monstruo — Dread & Redemption In Mexico City, will be published by Nation Books this December. Iraqigirl, the diary of an Iraqi teenager growing up under U.S. occupation, developed and edited by Ross, is now available from Haymarket Books. John Ross has just been declared cancer-free and will soon be returning to Mexico.]