The Modus Operandi of Our Establishment Press 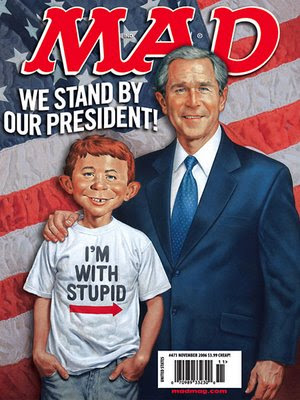 A large bulk of the political and pundit class are forever stuck in 1972, reflexively viewing every political conflict through its myopic prism (any war-opponent-candidate = George McGovern = loser). But as a New York Times article by Robin Toner this morning illustrates, the far more relevant precedent for this year’s election is 1988. Toner quotes something I wrote after Barack Obama’s Philadelphia race speech to define the critical question:

Sometimes, as Senator Barack Obama seemed to argue earlier this year, a flag pin is just a flag pin. But it can never be that simple for anyone with direct experience of the 1988 presidential campaign. That year, the Republicans used the symbols of nationhood (notably, whether schoolchildren should be required to recite the Pledge of Allegiance) to bludgeon the Democrats, challenge their patriotism and utterly redefine their nominee, Gov. Michael S. Dukakis of Massachusetts.

The memory of that campaign — reinforced, for many, by the attacks on Senator John Kerry’s Vietnam war record in the 2004 election — haunts Democrats of a certain generation. . . .

Mr. Obama, of Illinois, has promised a different politics, one that rises above the fray and the distractions of wedge issues. As Glenn Greenwald, a columnist for Salon, recently put it, “The entire Obama campaign is predicated on the belief that it is no longer 1988.”

But is that true?

That is the central question in 2008. For exactly that reason, I devote a substantial portion of Great American Hypocrites to analyzing the twisted, petty personality-based themes that dominated that election — and that led to the victory of an extremely unpopular and distrusted political figure: George Bush the First — because that is when the GOP pioneered the manipulative playbook that they have been using ever since to destroy the “character” and personality of Democratic candidates. And the circumstances that prevailed in the 1988 election make it an almost perfect parallel to this year’s election. Just as is true now, Americans heading into the 1988 election had endured almost two full terms of Republican rule under a President who — contrary to the Myth of the Canonized Ronald Reagan — they had come to distrust and disapprove of. That’s why 1987 and early 1988 polls continuously showed George Bush the First running far behind prospective Democratic challengers — because the GOP brand, like now, was profoundly discredited among the citizenry (though to a lesser extent than it is now). From a March 3, 1987 NYT article by then-reporter E.J. Dionne:

President Reagan’s approval rating has plunged to its lowest level in more than four years, according to the latest New York Times/CBS News Poll. The survey, taken Saturday and Sunday after the release of the report of a Presidential commission on the Iran arms deal, found that 42 percent of those surveyed approved of the way Mr. Reagan was handling his job and 46 percent disapproved.

It was his lowest rating since January 1983, when 41 percent approved of his performance. . . . About half the 1,174 adults interviewed by telephone said Mr. Reagan was lying about key aspects of the Iran arms affair. Only a quarter said he was in charge of what went on in his Administration, down significantly from earlier surveys. . . .

Vice President Bush has also suffered a significant drop in his popularity. This time 32 percent of those surveyed said they had a favorable opinion of him and 19 percent a negative view; in January 43 percent were favorable and 23 percent unfavorable ….

Still, the erosion has clearly hurt Mr. Bush politically. Asked how they would vote if the 1988 election were held now, 47 percent of registered voters said they would back former Senator Gary Hart, the Democrat with the most support in surveys of his party, and only 34 percent chose Mr. Bush ….

But almost every other measure in the survey indicated a deep erosion in Mr. Reagan’s popularity.

Approval of Mr. Reagan’s handling of foreign policy was at the lowest level of his Presidency: only 29 percent of those surveyed approved; 58 percent disapproved.

For those reasons, just as is true now, the GOP operatives running Bush the First’s campaign — Lee Atwater and Roger Ailes — realized that they could never win the election if Americas voted on the basis of substance, policy positions and issues. They thus resolved to shift the playing field away from issues to manipulative, adolescent questions of patriotism, manliness, and personal likability. Hence: Dukakis is an effete elitist who doesn’t believe in the Pledge of Allegiance; he looks dorky bowling wearing a helmet; he proved he wasn’t a man when he failed to show primal rage when asked in a debate about his wife being hypothetically raped, etc. etc. With the help of a media enthralled to such shallow, easy-to-chatter-about attacks, they succeeded in electing a highly unpopular figure from a scandal-plagued, discredited party. And Republicans, with their media partners, have been using that depraved playbook ever since, and will continue to do so this year. For the 1988 election, Reagan’s severe economic mismanagement, his disastrous foreign policy filled with savage covert wars, and widespread perceptions that top Reagan officials had blatantly lied about breaking the law were all just disappeared. Actual issues played virtually no role in George Bush the First’s 40-state triumph.

This entry was posted in RagBlog and tagged Media, Presidential Campaign, Republican Party. Bookmark the permalink.