The Moose-Hunting Pitbull with Lipstick 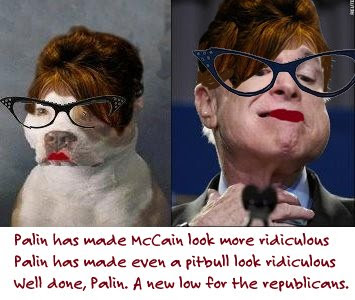 This cynical choice has left McCain’s honour in shreds
By Minette Marrin / September 7, 2008

I’m an American, California born. It’s true my mother was English and that I was brought up here from early childhood and think myself exceptionally lucky to belong here; I feel as English as I think anyone possibly can. Yet all the same, America is the land of my forebears on my late father’s side. I would even qualify to be a Daughter of the American Revolution, since one of my ancestors in North Carolina fought in the American war of independence. My grandmother travelled as a little girl in a covered wagon in the Wild West with my great-grandfather, who was an army officer. I have close family living in America still, and I have the right to vote there.

So I have always felt a strong sentimental attachment to the United States. I’ve felt proud of American achievements and generosity, and resented the unthinking antiAmericanism everywhere in Europe, ever since the first child in the playground of my first school shouted at me “Yanks go home”. Admittedly the spectacle of electioneering is a painful test of anyone’s respect for the United States. In their ghastly harrumphing electoral extravaganzas the Americans show themselves at their worst – vulgar, venal, naive, dishonest, stupid, wasteful, tasteless and vicious. Priggish though it may sound, I prefer to ignore these periods of national hysteria; after all, politics is nasty everywhere, it’s just that America does everything in extremes.

But last week everything changed. John McCain’s choice of Governor Sarah Palin was the last straw. It makes American politics look like a sick comedy. My faith in my native country had already been shaken by other elections and by other wrongs, such as the Iraq war (which I at first supported, to my shame). But the moose-hunting pitbull with lipstick is too much. I have never used my vote in the past, but if I had, I would usually have voted Republican. Today no rational conservative can vote for the Palin and McCain ticket. It makes America an international laughing stock. The fact that there has been a Palin bounce, after her charismatic speech, fills me with dismay.

This has little to do with Palin’s views. I disagree passionately with some of them, but the Republicans are entitled to present any views they choose to the electorate. Nor do I share the objections to Sarah Barracuda of the liberal sisterhood; unlike them I don’t in the least object to an ambitious woman being right-wing. I am rather right-wing myself, and Margaret Thatcher is one of my heroines.

Unlike the lily-livered liberal intelligentsia, I admire Palin for being a good shot and a good fisherwoman, and capable of butchering large wild animals in her basement, though I do not share her rather unsporting enthusiasm for shooting wolves out of small aircraft. I admire her for her determination, for her energy and her self-possession. I admire the virtues of small-town and frontier America. As for her grooming and her cunningly chosen glasses, if I don’t admire the results, I do admire the self-discipline and self-respect behind them.

All the same, her selection was a shock. What horrified me was not so much the woman herself, though she is clearly entirely unfit to be vice-president or president. It was McCain’s cynical and sudden choice of her. Would you give power of attorney over your entire life to someone you had only met once, or possibly twice? Of course not. You would give the matter and the person very serious consideration. Yet McCain in effect is offering power of attorney over all the affairs of the United States and over all Americans, including me, to a woman he had barely met. I myself wouldn’t hire a house-sitter on such scant acquaintance.

Palin herself may not know what a vice-president is for, but McCain surely must. He must know that a vice-president needs to be someone the president can trust and rely on and work with. Such a person is not easy to find, even when highly qualified in other ways. It takes time. It’s a personal matter, a question of psychological fit and mutual understanding.

Obviously McCain’s public relations people have been scouring the country for libertarian babes. But politics is not painting by numbers. McCain doesn’t know Palin at all, nor it seems did his vetting people; revelations keep emerging about her all the time. But he showed himself willing to hand the free world over to a stranger because his people think she is a psephological paragon.

I had thought that McCain was, for a politician, an honourable man. Certainly honour is one of his top selling points. But who can think so now? In choosing a woman he doesn’t know or understand, purely for electoral advantage, he reveals a dishonourable lust for office, a disrespect for women generally and a dishonourable indifference to the future of his country. After all, if this known unknown woman does become president, it will almost certainly be because he himself is dead – quite possible given his age and health – and past caring.

Though he didn’t know Palin personally, he must have known a few facts about her. He must have known that she compares feebly with previous vice-presidential candidates. Her education is minimal, her real political and managerial experience very slight. The only previous woman candidate for vice-president, the Democrat Geraldine Ferraro, was well qualified, well educated and experienced; Palin can’t hold a candle to her. Palin’s experience is as nothing compared to that of Dick Cheney (congressman, secretary of defence and White House chief of staff), Al Gore (senator and congressman) or George Bush Sr (congressman, ambassador to the United Nations and China, head of the CIA). Being a vice-president is not just a matter of PR and homespun rhetoric, or used not to be.

Even a brief consideration of Palin might suggest that she is not the straightforward redneck hockey mom she claims to be. It’s not possible to be much of a mom to five children, including a baby with Down’s syndrome, if you have a more than full-time job. Like other people with working responsibilities, you have to hand your children over to someone else to bring up. There’s nothing wrong with that, but it denies you the right to exploit your image as a yummy downhome mummy.

In short Palin is an ill-educated, inexperienced hypocrite. The Republicans are trying to sell her to the voters as something she isn’t, and McCain hardly cares what she is. It’s a bad day for my native land.

Many thanks to Diane Stirling-Stevens and her Friends Maria and Stephanie for the graphic.

This entry was posted in RagBlog and tagged McCain Mistakes, PresidentialCampaign, Sarah Palin. Bookmark the permalink.

1 Response to The Moose-Hunting Pitbull with Lipstick