The Muppets, Me and Public TV… 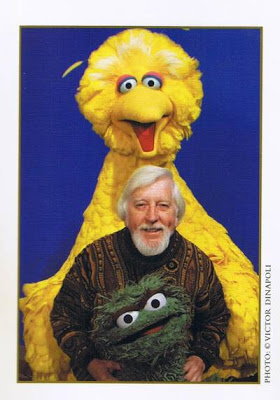 Caroll Spinney with Big Bird and Oscar the Grouch. Photo by Victor Dinapoli.
And the power of popular culture
By Michael Winship / July 13, 2008

Take a moment to forget about politics and the pickle of our worrisome world. A recent dispatch from Kathryn Kolbert, president of People for the American Way, about “the power of culture to shape our society,” triggered thoughts of my deep and abiding joy in the work of the late Jim Henson and the Muppets. It’s a love that goes back to childhood, when the Muppets first started appearing in brief, witty, anarchic vignettes on the old Ed Sullivan and Jack Paar television shows.

I secretly suspect they’re one reason I got involved in public broadcasting; a subliminal urge to associate my career with the network responsible for “Sesame Street.”

Kolbert’s e-mail specifically was relating the power of popular culture to the recent deaths of George Carlin and another great American you may not have heard of, Kermit Love. No relation to the frog of the same name, Kermit, 91, was the man who executed Jim Henson’s designs for Big Bird and Mr. Snuffleupagus, and assisted at the birth of Oscar the Grouch and Cookie Monster; a costume designer who also counted among his clients the Muppet-like Orson Welles, George Balanchine and Jerome Robbins. If you grew up with “Sesame Street,” you’ll remember him wandering among the Sesame denizens as Willy the Hot Dog Man.

I met Kermit Love in 1974, just a few months after I started working for public television in Washington, DC. Decked out in his Santa Claus-like beard and full Willy regalia, he was there in his capacity as Big Bird’s caretaker. The station, WETA, was having an open house with Big Bird as special guest. Unexpectedly, thousands of kids and their parents showed up on a rainy summer Sunday afternoon, patiently waiting out in the drizzle and churning the lawns into a mud mess worthy of Woodstock.

I quickly learned that it’s an endless task taking care of an 8-foot-2 canary (or whatever the hell he is). Bird (Snuffleupagus and I call him that as we consider his genius in the same league as Charlie Parker’s) is, as he always has been, portrayed by the great puppeteer Caroll Spinney, who also performs the role of Oscar the Grouch. Once suited up, his raised right arm is the neck and head, and his left arm becomes the left wing with some fishing line connected to the right for proper double flapping. A TV monitor inside keeps him from blindly walking into manholes. Or birdbaths. Kermit accompanied him on and off the set.

Try standing with your right arm held up like that for any longer than a minute or three and you’ll have some idea of the stamina Caroll has to have to make the whole thing work. Add to that the stuffy confines of the outfit – he can perform for only a short while at a time.

Throughout, Kermit made sure everything was fine, that Caroll was as comfortable as possible, and utmost, that the suit was kept in pristine shape. As Caroll moved about, feathers would frequently fly (some of them were supposed to). Big Birds, you may not be surprised to learn, molt big. Kermit made everything right.

When the long day was done, Caroll climbed out of the suit and we retired to a nearby restaurant. At the table next to us was a family with two small children. Caroll saw them, winked at Kermit and reached into his book bag. Inside was Oscar the Grouch himself. Caroll pulled him out and was immediately in character. The ecstatic look on the faces of those kids was unforgettable, as if they’d just been transported into the pages of the best storybook ever. This, I thought, is a great way to make a living.

Years went by and Kermit’s and my paths crossed again from time to time. I finally did meet Jim Henson when a colleague producing a documentary about the Macy’s Thanksgiving Parade asked the Muppets to host. I was invited to sit in on the first meeting. Henson came into the room wearing a bright paisley shirt and jeans, his long hair anchored by a headband. Following him was an accountant type in suit and tie, clipboard in hand. They watched the rough cut of the film approvingly and Henson agreed to participate, the accountant type dutifully taking down his instructions – change the color of Miss Piggy’s eyes, make sure Fozzie Bear knew his call time, etc.

More years went by and I was working as a writer at the Children’s Television Workshop, home of “Sesame Street.” I was assigned to their series “Square One TV” and “3-2-1 Contact,” which was proximate enough to let a bit of the Sesame Street stardust rub off. A fulfilling experience, writing funny stuff for kids and knowing that maybe you were even teaching them something. Grownups, too.

In 2004, I was at Ben-Gurion Airport in Tel Aviv, finishing up a two-week trip to Israel and the West Bank. Before I could get on my flight home, Israeli security held me for questioning. It was disconcerting – among other places, I had been spending time in Palestinian villages – and the officers knew everywhere I had been, every military checkpoint I had gone through, just about every person to whom I had spoken. They seemed to be trying to see if my account of my daily whereabouts would differ from theirs. Tense.

After quite some time, one of them asked, while you were here, with whom did you stay? I explained that I had been with friends in East Jerusalem, one of whom I had worked with at the Children’s Television Workshop. What’s that, they demanded?

I was free to go.

That’s how you use culture to change society, a little bit at a time. Thanks, Kermit.