The ‘Nation-Building’ Mirage : A Trillion Dollars and Counting 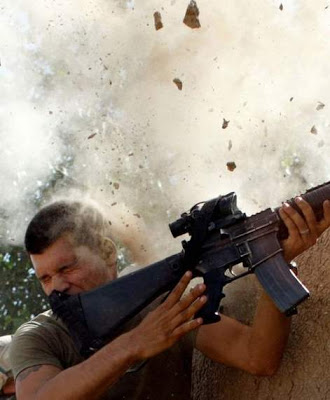 In October of 2001, President Bush invaded Afghanistan. About a year and a half later (March 2003), he did the same in Iraq. Now it is nearly nine years later, and the occupation of both countries continues. Sadly, nothing has been accomplished.

Both wars were entered into on the promise that they would provide more security for America, but they have not done that. The same terrorist dangers that existed in 2001, continue to exist today. In fact, it may be worse because with each killing of innocent civilians we create more enemies.

Both wars quickly morphed from an attack on terrorists to an attempt at nation-building. We should have learned from Vietnam that democracy cannot be imposed by military power (especially when it involves installing and protecting corrupt regimes), but that evidently is a lesson we still have not learned. Our leaders still seem to think that we can force other countries not only to be like us, but also to be our friends.

In the 2008 election, the American people voted for change, and one of the changes they wanted was to extract America from these unnecessary and failed nation-building attempts. During the campaign, President Obama promised to end these wars and bring our troops home (which is what a majority of the population wants to see). But upon taking the oath of office, he seems to have forgotten his promises. All he has done is continue the tragically-failed Bush/Cheney policies in both countries.

According to the president, at the minimum we must continue both wars for at least another year and a half (until the end of 2011). And both wars could go much longer than that unless certain amorphous goals are met. In other words, we could be looking at a perpetual war presence in both countries, and that seems to be OK with both of our political parties.

On May 30th (just a few days away), the United States will have wasted over a trillion dollars on these two wars. While the Republicans (and far too many Democrats) whine over not having the money to help our own citizens in this terrible economy, there seems to be no end to the spending of money to continue the nation-building and occupation of Iraq and Afghanistan.

Congress is currently considering another emergency Defense Appropriation Bill to spend tens of billions more on these two unending wars. Will this new expenditure of tens of billions of dollars (which will be followed by spending even more billions) actually accomplish anything? Probably not, especially since I’m not at all sure the government (or anyone else) knows what we are trying to accomplish or whether these shifting goals are possible to accomplish.

Senator Russ Feingold (D-Wisconsin) tried to inject some sanity into this continuing tragicomedy. He offered an amendment to the new war appropriations bill which would have required President Obama to provide a flexible timetable for the withdrawal of troops — a more than reasonable request.

In light of our deficit and domestic needs and in light of rising casualty rates in Afghanistan and in light of the growing al-Queda threat around the world, an expensive troop-intensive nation-building campaign just doesn’t add up for me… Frankly I am disappointed that we are about to pass a bill providing tens of billions of dollars to keep this war going with so little public debate about whether this approach makes any sense.

But the Feingold amendment failed on an 18 to 80 vote. The majority of both Republicans and Democrats seem happy to continue throwing huge amounts of money down the bottomless well of unending war, without knowing what we are trying to accomplish or whether anything at all can even be accomplished. And they don’t seem to care how much longer they will have to do this.

One of the saddest things is that while Bush was president there was an active anti-war element in this country, but since the election of President Obama the anti-war element has virtually disappeared (even though he is continuing the same failed policy in both countries). Americans have turned their attention from the wars to the economy, the recession, and the need for millions of new jobs. They don’t seem to realize that if it were not for these wars, billions of dollars would be available to tackle these economic problems.

Even if these two wars were necessary and morally justifiable (which they are not), we simply cannot afford them any longer — not in terms of the enormous amounts of money, the lost American lives, or the slaughter of innocent civilians in Iraq and Afghanistan. It is long past the time when these tragic wars should have been stopped.

We must re-ignite the anti-war fervor and get these two wars stopped. It is not just morally right — it’s the only course of action that makes sense.

1 Response to The ‘Nation-Building’ Mirage : A Trillion Dollars and Counting