The Root of All Foolishness

From How Many Miles From Babylon.

Money on the Table
posted by Eleutheros 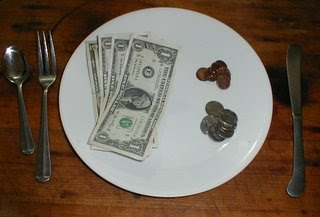 This morning while going about the usual homestead tasks the radio was carrying Bush’s address concerning the economy where he opined that he saw no reason to think we were headed for recession. What caught my ear, though, was that during the usually catalog of political clichés numerating what the people want, he said people wanted to be able to put money on the table.

Of course true disciples of Eleuthronomics will instantly recognize here the fallacy of viewing money as if it were something real.

I know, it’s just another of those colorful Bushisms. But it reflects an underlying way of thinking that Bush does not hold alone.