The Saturday Snapshot – Straight From the Horse 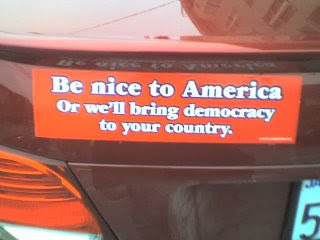 When Bush went to Ohio on Thursday to talk about terrorism, he ended up musing about marriage and chicken-plucking plants, the agony of death and his Oval Office rug, which resembles a sunburst.

About his legacy, Bush said historians are still assessing George Washington, the nation’s first leader. “My attitude is, if they’re still writing about (number) one, 43 doesn’t need to worry about it.”

On being married: “A good marriage is really good after serving together in Washington, D.C.”

Maybe the president just felt like jabbering at the town hall-style event in Tipp City, Ohio. He began talking about terrorism and ended 90 minutes later after chattering about everything from life after the White House to Vietnam War and the brutal Khmer Rouge regime.

_”Politics comes and goes, but your principles don’t. And everybody wants to be loved — not everybody. … You never heard anybody say, `I want to be despised, I’m running for office.'”

_”The best thing about my family is my wife. She is a great first lady. I know that sounds not very objective, but that’s how I feel. And she’s also patient. Putting up with me requires a lot of patience.”

_”There are jobs Americans aren’t doing. … If you’ve got a chicken factory, a chicken-plucking factory, or whatever you call them, you know what I’m talking about.”

_”There are some similarities, of course” between Iraq and Vietnam. “Death is terrible.“

_”I’ve been in politics long enough to know that polls just go poof at times.”

As he has before, Bush told the story about how his first presidential decision was to pick a rug for the Oval Office, a task he quickly cast to his wife. He told her to make sure the rug reflected optimism “because you can’t make decisions unless you’re optimistic that the decisions you make will lead to a better tomorrow.”

Later, when he talked about his hope for succeeding in Iraq, Bush said, “Remember the rug?”