The Siege of Gaza Must Be Broken 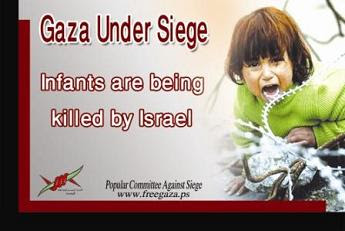 Can a handful of international activists and two boats break the siege of Gaza?
by Sharat G. Lin / August 18, 2008

The voyage to “break the siege of Gaza” was originally planned for the summer of 2007. But it did not materialize for lack of funds and because of logistical challenges in arranging for purchase and delivery of the boats. Many observers wondered whether the ambitious grassroots project without the backing of any major organization or agency would ever get off the ground.

But on August 10, 2008, two small Greek-flagged boats finally arrived from Greece to Chania, Cyprus. They were the 21-metre long SS Free Gaza (غزة الحرة) and the 18-metre SS Liberty, named in memory of the 34 American sailors who were killed when Israel attacked the USS Liberty in apparent error during the Six Day War in 1967. Before their arrival in Chania, the identity of the vessels had been a closely-guarded secret for genuine fear of Israeli sabotage. Once the vessels were renamed and presented at a press conference, activists remained on board both vessels 24 hours a day for security reasons.

After days of additional delays due to soaring prices for supplies and diesel fuel, a shortfall in funds, and turbulent weather, the vessels finally departed Crete en route to Cyprus, where they will take on the remaining half of the activists waiting apprehensively in Nicosia. Along the way, the activists have received tremendous support, including material assistance, from local residents in Crete and Cyprus.

Some forty peace and justice activists from 17 countries will be on board, including Israeli peace activist Jeff Halper, founder of the Israeli Committee Against House Demolitions (ICAHD) and nominee for the Nobel Peace Prize. Other notable individuals include 84-year-old Holocaust survivor Hedy Epstein of Saint Louis, Missouri; Lauren Booth, sister-in-law of former British Prime Minister Tony Blair; members of the European Parliament; a survivor of the Palestinian catastrophe (al-Nakbah); and Free Gaza Movement co-founders Paul Larudee and Greta Berlin. Including professional crewmembers and journalists, the number of people on the two boats could reach as high as sixty.

The Israeli government and Zionist organizations like the Anti-Defamation League have tried (unconvincingly) to link the Free Gaza Movement and its affiliations to the International Solidarity Movement to armed Palestinian resistance organizations that they have labelled as “terrorists.” In fact, the Free Gaza Movement and the Break the Siege campaign in particular have received no funding from any Palestinian organizations, armed or otherwise. The $200,000-300,000 raised for the voyage from Cyprus to Gaza has been entirely from small fundraising dinners in private homes and restaurants, individual contributions, and from the sale of fair-trade Palestinian olive oil rebottled in Berkeley, California by community volunteers. Donna and Darlene Wallach, twin sisters of Eastern European Jewish descent who have lived for many years in Israel and the Palestinian territories, were among those tireless volunteers and will be on the boats to Gaza.

More ominously, Lauren Booth reported on August 15, 2008 that a dozen threatening anonymous calls, text messages, and voice mails had been received by Free Gaza participants in Nicosia. This escalated to family members of activists. Booth reported that on August 14, an anonymous call to her husband in France threatened, “Your wife is in great danger. These ships will be blown up.” Who but a state intelligence agency like the Mossad could readily obtain private telephone and mobile numbers around the world?

Meanwhile, the Israeli daily newspaper Ha’aretz reported on August 17, 2008 that Israeli “defense officials favor forcefully blocking two boats which a group of U.S.-based activists plan to sail to Gaza to protest what they call ‘the Israeli siege on the Strip.’” The statement was based on a position paper by the legal department of the Israeli Foreign Ministry, arguing that Israel has the right to use force against the protesters under the Oslo Accords, which gives Israel responsibility for Gaza’s territorial waters.

When the Israeli government withdrew thousands of Israeli settlers and troops from Gaza at the end of 2005, it called the move “disengagement.” Many thought that the occupation of Gaza would come to an end. But on January 25, 2006, the day of Palestinian elections, Israel sealed off Gaza by closing the last open crossing at Erez owing to “security concerns” relating to the anticipated strong turnout for Hamas. Karni crossing had been closed since January 15, 2006, and three other checkpoints had been open only intermittently.

The final election results gave Hamas 74 seats out of 132 in the Palestinian Legislative Council, and an overwhelming majority in Gaza. After the elections, Israel proceeded to tighten control over the flow of goods and people into and out of Gaza in an attempt to destabilize popular support for Hamas and block Hamas’ participation in the Palestinian government headquartered in Ramallah in the West Bank.

Gaza is a strip of land approximately 40 kilometres long by 7 kilometres wide. It includes cities, towns, 8 major refugee camps and several minor ones, agricultural land, and uncultivable sand dunes and saline intrusion areas. With nearly 1.5 million people, Gaza has an overall population density twice that of a typical large U.S. city or roughly comparable to a European city. Gaza cannot possibly feed itself. It has no natural sources of energy — neither fossil fuels nor hydroelectric potential. It has no natural aquifers to provide a renewable source of fresh water. As a relatively unindustrialized territory, it is completely dependent on the outside for nearly all of its consumption needs and the majority of its viable employment.

After 1967, Gaza residents gained employment inside Israel and became dependent on the crossings for daily commutes to their jobs in Ashkelon, Tel Aviv, the Negev, and elsewhere. But that source of employment was largely cut off by Israel during the Second Intifada, and completely eliminated with the economic siege imposed on Hamas in Gaza in 2006. In reality, the drastic lack of employment, and the obstacles placed on the supply of food, drinking water, medicines, fuel, and electricity became a chronic collective punishment on all Gaza residents in full violation of international law.

Israeli “disengagement” from Gaza changed nothing with respect to the wall and fence that completely encircle Gaza from its northern boundary with Israel to its southern boundary with Egypt. Even the Rafah crossing between Gaza and Egypt is effectively controlled by Israel through European Union monitors who have acceded to Israeli demands to have veto power over any person or baggage moving through the Rafah crossing. The Kerem Shalom crossing for goods from and to Egypt is controlled directly by Israel because it operates on an intervening sliver of Israeli territory. The remaining checkpoints not only are opened by Israel very sparingly, but are each used by Israel for very restricted purposes. The Erez crossing in the north is the primary gateway for people, but not for goods. Nahal Oz crossing is exclusively for liquid fuels. Karni crossing is the primary entry point for food, medicines, and manufactured goods. Sufa crossing is mainly for bulk aggregates and building materials. Kissufim and Elie Sinai crossings are effectively closed.

Gaza has a commercial airport southeast of Rafah, but all Palestinian air traffic is banned by Israel. That leaves the sea. The Israeli Navy controls all waters around Gaza and does not allow any vessels in or out of Gaza’s fishing limits. There are over 700 boats, mostly fishing boats, registered in Gaza. The boats provide a livelihood for 3000 Palestinian fishermen according to a United Nations survey. Under the 1993 Oslo Agreement, the fishing limit for Gaza fishermen was set at 20 nautical miles from the shore. A “no fishing zone” 2 nautical miles wide was established as a security buffer from the Israeli sea boundary (as if fishermen were a threat to Israel’s security) within Gaza’s territorial waters and extending out from shore to the fishing limit. A similar “no fishing zone” one nautical mile wide was established on the sea border with Egypt. But in 2002 as a result of the comprehensive Israeli military assault on all the occupied Palestinian territories launched at the end of April, the Bertini Agreement restricted Gaza’s fishing limit to 12 nautical miles. Then, as part of the ever-tightening noose around Hamas-ruled Gaza, the Israeli Defense Forces began enforcing a 6-nautical-mile fishing limit from October 2006. Not only has Gaza effectively become the world’s largest open-air prison, but some of the walls of the prison have been progressively closing in on the inmate population.

So it is not surprising that perhaps hundreds of Gaza fishing boats may be preparing to greet the uncertain arrival of the SS Free Gaza and the SS Liberty. In Gaza Port alone, there are over 470 registered boats. If the Israeli siege is broken by sea, it will be a tremendous morale boost to Gaza fishermen whose operating territory has shrunken from the Eastern Mediterranean before 1967 to a mere sliver of coastal water under Israeli military control. Even in the years following the Israeli occupation, Gaza Port continued to be a bustling hub not only for fishing but for international shipping as well. I remember well in 1973 how ocean freighters used to wait in queue offshore for a berth in Gaza City’s cargo port. Few places on Earth have witnessed such a drastic and comprehensive economic decline under military occupation.

The SS Free Gaza and the SS Liberty either may pave the way for unrestricted international access to Gaza by symbolically breaking the Israeli naval blockade, or they will be stopped by the Israeli Navy which will prove that Israel still occupies Gaza despite its denials. The action places the Israeli government on the horns of dilemma, out of which neither outcome will work in its favor. It is only regrettable that no Arab government or organization has had the courage to challenge the Israeli blockade.

It is the responsibility of all activists for human rights and social justice worldwide to stand behind the courageous passengers of the SS Free Gaza and SS Liberty in the coming critical days as they prepare to depart from Cyprus. This is an act of nonviolent civil disobedience following in the footsteps of Mahatma Gandhi — unarmed ordinary people with an unshakable moral conviction facing down one of the most powerful military machines on Earth. Global awareness is key. The probability that they will be harmed is drastically reduced if the eyes of the world are focused on Gaza’s coastal waters. The siege of Gaza must be broken!