These Israeli myth mongers have to be the most cynical lot on Earth. I, for one, am so tired of hearing this drivel from them that I could just scream. These guys are perfectly content massacring hundreds of Palestinians at a crack, while they fear a nuclear attack from a country that, by all known facts, has no nuclear weapons, no nuclear weapons development program, and no nuclear aspirations. And the Israelis know it. Cynical … 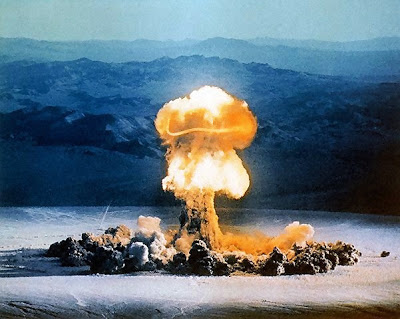 THE MYTH
‘Iran nuke could wipe Israel off map in seconds’
By Haaretz Service / July 1, 2009

Oren made his comments in a conversation with journalist Jeffrey Goldberg at the Aspen Ideas Festival in Colorado.

The newly appointed ambassador warned, “There are clocks ticking all around,” with regard to the Iranian nuclear issue. “One of those clocks is the uranium enrichment clock, which will show that by a certain date the Iranians will have sufficient, highly enriched uranium materials to create a bomb that could literally wipe Israel off the map in a matter of seconds.”

Oren said the world must remain vigilant about what happens in Iran during the country’s tumultuous post-election period.

“It’s very important that we watch carefully what happens in Iran – the events in Iran have unmasked to the world the true nature of this regime,” said Oren. “This is a regime that’s willing to kill its own citizens; it will certainly have no compunctions killing other people in the region, Jews and Sunni Arabs alike.”

Oren added that he would not “second-guess” the Obama administration’s next move in dealing with Tehran’s nuclear aspirations, and added that he was certain Obama had “the best interests of the U.S. and the interest of Israel at heart.” Israel, he said, was concerned mainly about the “timing and timeline” of dealing with Iran.

Oren also addressed the issue of Israeli settlements in the West Bank, which have stoked tensions in recent weeks between Israel and its close ally.

“I never said settlements are not an issue, but they’re not the issue,” he said.

The incoming head of the International Atomic Energy Agency (IAEA) says he knows of no hard evidence that Iran is trying to gain the ability to develop nuclear weapons.

Japanese diplomat Yukiya Amano told the Reuters newsagency he has seen no such evidence in IAEA official documents.

Outgoing IAEA chief Mohamed ElBaradei said last month it was his “gut feeling” that Iran wants the ability to build atomic weapons. He said Iran’s ultimate aim is to be known as a major power in the Middle East.

Iran’s ambassador to the IAEA (Ali Asghar Soltanieh) said at the time ElBaradei is wrong and that Iran has no intention of ever having a nuclear weapon.

The United States and its Western allies believe Iran’s nuclear program may have a military component.

Iran has long maintained that its nuclear program is intended to produce electricity.

Iran has been hit with three sets of U.N. sanctions for its refusal to stop enriching uranium, a process that can be used to develop nuclear weapons.

Amano, who on Thursday was elected director-general of the IAEA, will succeed ElBaradei later this year. ElBaradei has served for 12 years as head of the U.N. nuclear agency.