The Spirit of Humanity: An Interview with Cynthia McKinney 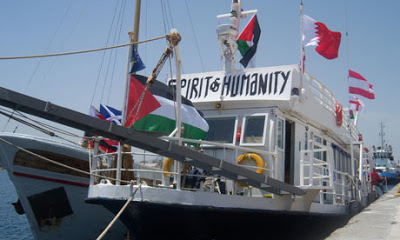 Cynthia McKinney is a former US Representative who served from 1993-2003 and from 2005-2008 . She was the 2008 Green Party presidential nominee and has been an active member of the Free Gaza Movement. In 2004, The Backbone Campaign awarded her the fifth annual Backbone Award “because she was willing to challenge the Bush administration and called for an investigation into 9/11 when few others dared to air their criticism and questions.” Here, Ishmahil Blagrove, Jr. talks to McKinney about her experience with the situation in Gaza and her views on today’s political landscape.

Last year in the midst of the Israeli onslaught against the people of Gaza, you attempted to break the Israeli siege by entering by boat. What happened?

We were rammed by the Israelis. There I got a chance to see the complicity of the media. We had CNN on board and the CNN reporter was literally arguing in the midst of a tragedy; he was arguing with headquarters because they didn’t believe what he was telling them. They would have rather run the story as the Israelis told them. I have seen how the media self-censor, twist, contort themselves to report misleading stories and then they report outright lies.

What is the situation in Gaza and explain to me why you feel so passionate about getting into Gaza and assisting?

Why do believe there has not been more international attention given to the plight of the Palestinians?

The media as we know it – and I can only speak mainly about US media and the media that is owned by the US media in other parts of the world – they are what I call special interest media and the special interest media have demonstrated amply that they serve the political aims and values of certain special interests inside the United States, whose goal is to affect the formulation of policy. And so we don’t get a discussion of Gaza and the Palestinian plight inside the United States as we should because it doesn’t serve the special interests in Washington, DC who lobby for a particular point of view that does not favor the Palestinians. There was an advert for Gaza that the BBC were supposed to run and they refused to run it and it was unprecedented that they would refuse to run an advert requesting help, relief for besieged people; but that shows the power of special interests operating in Britain. The Zionist lobby is powerful in the United States; it is the most powerful lobby that operates in Washington, DC and we saw it flex its muscle in Britain during Operation Cast Lead with the BBC.

What are President Obama’s policies in the region?

On the day that we were turned away from embarking upon our peace mission in Cyprus, President Obama signed over a 100 billion dollar supplemental appropriation for more war and occupation in Iraq and Afghanistan. The drones continue to kill people in Pakistan, the increase level of troops in Afghanistan, the perception of Russia and China as enemies throw back to the days of the cold war, the continued search for a home for AFRICOM: these are not things that we should be proud of coming from a President with the name Barrack Hussein Obama. But, in fact, this is what is happening under his administration. We also have seen the greatest transfer of wealth out of the hands of African Americans that we have ever seen probably since slavery, not only out of the hands of African Americans, but out of the hands of Latinos and increasingly out of the hands of middle-class white Americans as well

Many people suggest that because there is an African American president, that change has come. Are you hopeful?

What American people and the global community were subjected to was very well financed Madison Avenue propaganda. A slick media campaign to promote someone whom the United States people didn’t even know. He and I were sworn in together in 2005 in the Congress; this was when he walked into a Senate seat virtually unopposed. Now, when was the last time an African American ever was given a Senate seat? I don’t think it’s ever happened, even during the times of reconstruction when we had black Senators, black Governors; those positions of power were earned, through the blood and the toil of black people who went to the polls and voted in what, at that time, were fair elections.

Then why do you believe that President Obama was elected?

I think the American people were looking for dignity. I think the dignity of our country had been stripped from us as a result of the publication of the photos around Abu Ghraib, the information came out about the lies of Iraq and we had been through 9/11 and the Administration knowingly lied and tied 9/11 to Iraq and so there were a lot of things that the American people wanted desperately to take a blue pill for. And I’m referring to the blue pill of the Matrix, where one takes the blue pill and slips into a world of make believe and so that’s where many people are.

What do you think it will take to get that dramatic shift in American public opinion?

The American people need information. If you look at what happened in Vietnam, the policy was taken out of the hands of the joint Chiefs and put into the hands of the people. When the television images came into every living room in the United States, people understood that they needed to change policy themselves. I hope the American people only need information because once their conscience is pricked with that information then they will be compelled to do something different.

You are back in Cyprus for a second time; what is the purpose of your mission now?

The purpose of the mission is to assert our belief in the Universal Declaration of Human Rights. That it is our right to travel anywhere in the world that we so choose and it is the right of people in other parts of the world to receive us, if they choose to do so.

Why have you taken up the cause of the Palestinian people?

I have been asked that a lot because I am not Arab, I’m not Muslim. So, why do I care? Well, Dr. Martin Luther King, Jr. said it best: “Injustice anywhere is a threat to justice everywhere.” And this is clearly a gross injustice; this is genocide, crimes against humanity. How can anyone remain silent in the face of this? During the civil rights movement, we were outraged at our treatment and we just couldn’t vote; here, Palestinians can’t live.

This video is the last footage taken onboard the Spirit Of Humanity before its voyage to bring humanitarian aid to Gaza was prematurely halted by Isreali special forces. It shows the atmosphere inside the cabin as the crew try to negotiate with the Israeli ship via radio.

This entry was posted in RagBlog and tagged Crimes Against Humanity, Gaza, Israel, Palestine, Palestinian Blockade. Bookmark the permalink.

12 Responses to The Spirit of Humanity: An Interview with Cynthia McKinney