The Tower of Wealth

We’ve published this pic previously, but it fits the article so perfectly that we can’t resist posting it once more. Besides, it really is a classic. 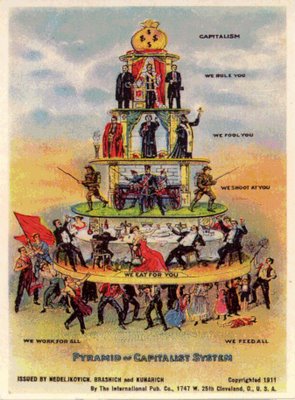 Imperial arrogance – the road to chaos

The two mainstays of the neoconservative and neoliberal agenda can be reduced to the accumulation of more wealth for the tiny upper clique of the American population and to assuring the ever-lasting continuation of the U.S. empire. The rest of the world is simply of no consequence to the neocon way of thinking and that’s where they make the huge mistake that is one day going to be their downfall. Willful shortsightedness has always been their hallmark and every day now it is looking ever more likely that their undoing is imminent. When the base caves in, the tower will come tumbling down.

U.S. imperial arrogance has had no bounds since they began to see themselves as an invincible power already in the 19th century. That’s when they began to strike out in Latin America to consolidate their empire in the western hemisphere and the Philippines. The geopolitical situation in the world has recently led Washington to assume preposterous rights to single-handedly reshape the world to their liking and the long-term goal is clearly to become the rulers of the planet. But it now looks increasingly as if the roof is going to fall in on the whole pack of wolves and one day soon the now astronomically rich will find themselves left out in the cold with nothing but worthless paper in their portfolios.[1]

Don’t credit the neocons with any deep ideological thinking in their way of going about conquering the world. The United States must obviously be an empire, its military must be invincible and the country must continue to be by far the wealthiest country in the world. Of course we are the most powerful and the world has to see it clearly and tremble with awe and fear. We are also the moral beacon to the world; we alone know what has to be done to save our moral values, our high-minded law and order high priests read the gospel of righteousness to the world.

Certainly some neocons believe that God has given them the right or even the duty to defy anyone who threatens U.S. hegemony and that therefore they have every right to run roughshod over international law and conventions. The plenipotentiary powers of the pre-revolutionary European kings is their model. Napoleon and Hitler are their forerunners.

They invaded Iraq, not to get rid of Saddam Hussein. What did they care? They had cooperated most warmly with him for decades before. Of course they thought they would take over the running of that part of the world, Iraq, then Iran, then Syria. No big deal. That whole part of the world was going to become a U.S. protectorate. The American military is invincible (as the warm-up exercises in Central America, Panama and Grenada had proved to Ronald Reagan) and now that they had the American people scared out of their wits after 9/11 (Well done Cheney, Rummy and Karl Rove!), they were absolutely free to go on with their plans to conquer the world. A hyped-up global war on terror was just what it would take to get the Congress to play into the conspiracy game. [2]