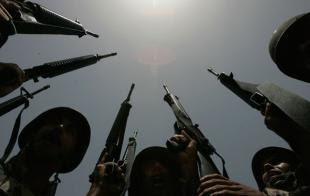 Iraqi soldiers celebrate after receiving new rifles from the U.S. forces in Baghdad, Iraq. U.S. forces have given the Iraqi army 800 pieces of M-16 and M-4 rifles as a part of the U.S. Foreign Military Sales (FMS) program.
We Arm the World
By Frida Berrigan / January 2, 2009

The United States once again leads the world in exporting weapons

A $7 billion missile-defense system for the United Arab Emirates. An estimated $15 billion potential sale of Lockheed Martin’s brand-new fighter plane to Israel. Billions of dollars in weaponry for Taiwan and Turkey. These and other recent deals helped make the United States the world’s leading arms-exporting nation.

The Pentagon routinely justifies weapons sales as “promoting regional stability,” but many of these arms end up in the world’s war zones. In 2006 and 2007, the five biggest recipients of U.S. weapons were Pakistan ($3.5 billion), Iraq ($2.2 billion), Israel ($2.2 billion), Afghanistan ($1.9 billion) and Colombia ($580 million) — all countries where conflict rages.

In Pakistan, the fighting ranges from communal violence and state repression, to attacks against India, to deadly battles between Pakistani military and al Qaeda forces in the northwest provinces. Israel has used U.S.-supplied weapons in the West Bank and Gaza, as well as in the 2006 invasion of Lebanon. Colombia uses U.S. weaponry to fight the drug war. Of the 27 major conflicts during 2006 and 2007, 19 of them involved U.S-supplied weapons.

While full data is not yet available for 2008, the United States continues to flood warzones with more destabilizing weapons. In 2008, the Pentagon brokered more than $12.5 billion in possible foreign military sales to Iraq, including guns, ammunition, tanks and attack helicopters.

Raed Jarrar, an Iraqi analyst with American Friends Service Committee, notes the chance that this weaponry will promote peace and democracy in Iraq is slim.

“The current Iraqi armed forces are the same forces and militias that have been committing ethnic and sectarian cleansing during the last years and they have a violent record full of human rights violations, torture and assassinations,” says Jarrar.

What’s more, the United States cannot successfully track its weapons. Hundreds of thousands of U.S.-supplied pistols and automatic weapons destined for Iraqi security forces between 2004 and 2005 remain lost, according to the Government Accountability Office.

The Pentagon has “no idea where they are,” Rachel Stohl, a senior analyst at the Center for Defense Information, a national-security think tank, told the Washington Post in 2007. “It likely means that the United States is unintentionally providing weapons to bad actors.”

U.S. law curbs weapons sales to countries engaged in a “gross and consistent” pattern of human rights abuses or to countries using U.S. weapons for aggressive purposes. But these requirements are often set aside in favor of short-term objectives.

Michael Klare, director of the Amherst, Mass.-based Five College Program in Peace and World Security Studies, has followed the arms trade for decades. He discounts official claims that the delivery of arms can help promote stability.

“The more we help one side, the more that regime’s opponents are driven to seek arms from another supplier, leading to an inevitable spiral of arms buying, provocation and conflict,” Klare says.

According to Stohl, “The Bush administration has demonstrated a willingness to provide weapons and military training to weak and failing states and countries that have been repeatedly criticized by the U.S. State Department for human rights violations, lack of democracy and even support of terrorism.”

The Obama administration could mark a new era in arms trade. On the campaign trail, Obama expressed openness to signing the global cluster munitions ban, but he has yet to speak about a global Arms Trade Treaty — which would establish more rigorous conditions for weapons exports — or about curbing weapons sales, in general.

“The arms trade is never a panacea for instability,” Klare says. “It can only enflame regional tensions and heighten the risk of war.”

[Frida Berrigan is a senior program associate with the New America Foundation’s Arms and Security Initiative and a member of the Campaign for a Nuclear Weapons Free World.]

This entry was posted in RagBlog and tagged Military Contractors, U.S. Military. Bookmark the permalink.