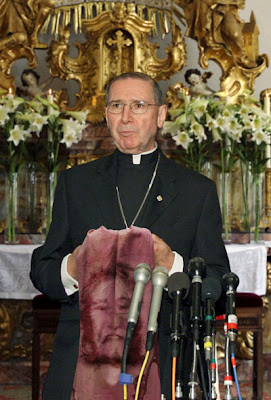 Cardinal Giovanni Lajolo assures reporters at a Vatican press conference that it is far too late for club soda.

VATICAN CITY—The Shroud of Turin, an ancient linen cloth believed to bear the image of Christ and considered by many clerics and devotees to be one of the holiest relics of the Christian faith, was inadvertently dyed a light shade of pink after being washed with a red T-shirt, sources reported Tuesday.

The holy antiquity, thought by some to be the very garment Jesus Christ was buried in, was discovered in 1354. Though it has suffered oxidation and fire damage over the centuries, this is the first time that the shroud has been harmed in a laundry-related mishap.

“Simply because the shroud has been given a slight pinkish tint does not in any way diminish its sanctity,” Vatican spokesman Cardinal Giovanni Lajolo said during a press conference held to address the spiritual repercussions of the shroud’s staining. “It is still very much the icon of the suffering of the innocent of all times.”

The Vatican stressed that nothing out of the ordinary happened to the shroud during the initial preparations for its monthly laundering in Rome. As is custom, on the third Sunday of the month, the priceless relic—which is kept in the royal chapel of the Cathedral of Saint John the Baptist in Turin, Italy—was taken from its hermetically sealed, bulletproof glass case and stuffed into the Blessed Papal Laundry Sack, and it was then transported by a retinue of Swiss Guards to Vatican City without incident.

According to Lajolo, the damage occurred when Pope Benedict XVI, whose turn it was to do the Vatican laundry, did not notice that a brand-new, bright-red Hanes Beefy-T belonging to Cardinal Angelo Sodano had been placed inside of the consecrated cleansing vessel, the Holy Whirlpool 24934 top-load washer.

The pope then started a load of white vestments, including the shroud, only realizing what had happened when he returned to remove the sacred artifact, which is always line-dried.

“His Holiness was distracted with trying to scrub a tough Blood of Christ stain out of Cardinal Nicora’s miter,” Lajolo said. “Not that this was some sort of mistake on his part. The pope is still infallible. We have to keep in mind that this is all part of God’s greater plan.”

“And who are we to question or reject the ways the Lord works through our laundry?” Lajolo continued. 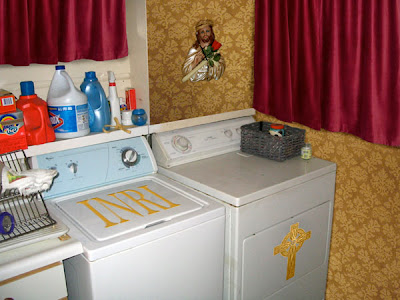 The papal laundry room where the shroud had been washed thousands of times without incident.

Church officials said that the shroud’s staining was not in any way due to negligence on the Vatican’s part. An investigation into the matter showed that the detergent had been properly blessed before the laundering, and the holy water softener that was installed last summer was working perfectly.

“We must not allow ourselves to fall into despair, for, as sinners, we are flawed and must seek forgiveness in the Lord alone,” said Lajolo, who later hinted that the damage to the shroud was possibly God’s response to the sins of the world, and especially homosexuality. “As Christ teaches, let he who has never overly starched, shrunk, or rent his garments cast the first stone.”

Though the discoloring of the Shroud of Turin has come as a shock to many Catholics, it is not the first time that a holy relic has been damaged. In 1983, several pieces of the True Cross were water-stained after being used as coasters during Pope John Paul II’s birthday party, and in 1572, the knucklebone of St. Olaf was accidentally thrown out with a plate of half-eaten chicken wings.

In the wake of the incident involving Christ’s death shroud, the Vatican has been exploring possible ways to restore the raiment back to its original color.

“We do not want to attempt to use caustic cleaning agents for fear of turning the blessed shroud an unholy bright orange,” Lajolo said. “We continue to look to God for divine guidance as to the purity and virtue of using a color-safe bleach.”