ALICE EMBREE : DOCUMENTARY FILM | The Wobblies are coming to town

The Industrial Workers of the World, also known as the Wobblies, are coming to Austin.

The Industrial Workers of the World (IWW) are fondly remembered as the “singing union” and the feisty soapbox speakers, and the union that advocated “One Big Union for All the Workers.” A documentary made in 1979 has been re-mastered into digital glory.

The trailer to the movie that will show in Austin on May 4 is accompanied by this description:

Investigates a nation torn by naked corporate greed and the red-hot rift between the industrial masters and the rabble-rousing workers in the field and factory.

The 1979 film has been re-mastered into digital glory. The details are beyond the scope of this author, but true cinefiles may be interested in those details as reported by IndieWire on April 1, 2022. The new archival master is stored in New York’s Museum of Modern Art’s Film Preservation Center. 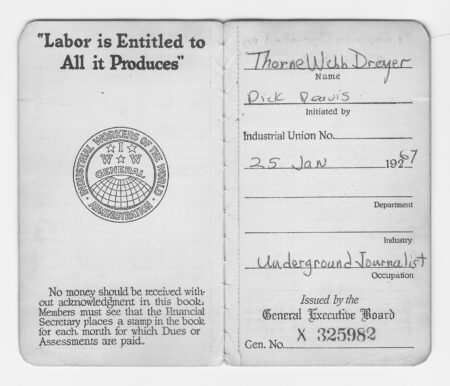 I am interested in this documentary for a number of reasons. The first is personal. I was a member of the IWW, paying union dues as a printer with Red River Women’s Press in Austin in the 70s. We printed a run of the IWW constitution at the press. I gave my dues book and other IWW material to the Briscoe Center for American History, but Thorne Dreyer showed off his Wobblie membership book on Zoom after we taped a Rag Radio interview with labor historian Jane Little Botkin.

Jane Botkin, former Dripping Springs, Texas, teacher, will introduce the documentary and speak afterwards. She has written about her ancestor Frank Little in the book Frank Little and the IWW. Botkin has authored a companion book, The Girl Who Dared to Defy: Jane Street and the Rebel Maids of Denver, about the woman who organized domestic workers.

I am intrigued by the history of these early labor struggles and I’m enamored with the songs written by and about IWW member Joe Hill that remain standards for the labor movement of today. A few of the songs need adjustment for gender, e.g. “Working men of all countries unite…” can be improved as “Working folks of all countries unite.” I think that Joe Hill might agree.

The vision of workers united globally is a powerful one. The Wobblies didn’t believe in organizing by trade, because they believed that allowed the bosses to divide labor. They fervently believed in organizing the unorganized, the part-time workers, the miners and seasonal farmworkers, and the women textile workers on the East Coast of the United States. Their union meetings required translation into multiple languages to accommodate the diversity of immigrant languages spoken by workers. 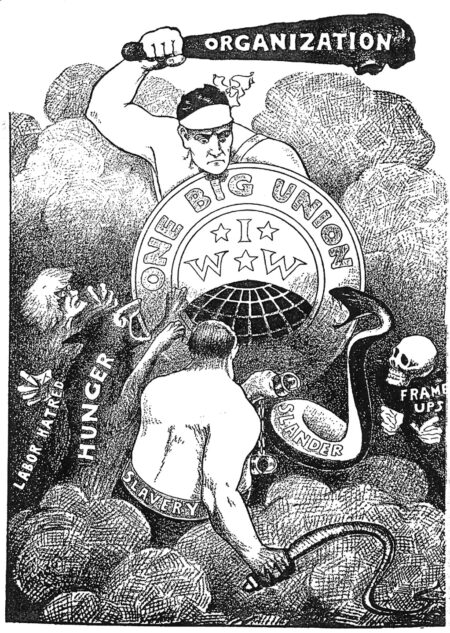 We need to document radical history.  Otherwise, it vanishes like vapor.  I was astounded by the history that had been hidden from me as I became a 60s student radical and then a 70s radical feminist.  I know that history can be lost and those in power have no interest in teaching what may prove valuable to the powerless.

I believe that The Wobblies will resonate with many who are organizing “the unorganized” today. For those who want a deeper dive into the importance of The Wobblies, I suggest that you read Robert Young’s, article in Monthly Review, November 1, 2017), “One Big Union, One Long Fight.”

He sites the parallels with a current precarious workforce, those who contract, those who work several jobs to make ends meet, those divided by immigrant status from “citizens.”  The Wobblies would have said that we are citizens of the world and we have one enemy.  Young talks about the importance of the history to provide us with lessons:

Into this highly precarious situation stepped the Industrial Workers of the World (IWW), whose history and experience offer insight into how to grapple with these problems today. Founded in Chicago in 1905 by a veritable who’s-who of the era’s leading labor militants, including Mother Jones, Eugene Debs, and “Big Bill” Haywood, the IWW sought to build “One Big Union,” uniting workers across industries and sectors as a counterforce to an emerging monopoly capitalism. The key to this strategy was to organize industrially, as opposed to the then-dominant practice of organizing workers on the basis of specific crafts, the approach promoted by the American Federation of Labor (AFL). The IWW (or Wobblies, as they became known) saw the self-defeating nature of the AFL strategy: when workers were organized by craft under separate contracts, employers often pitted one group of workers against another. AFL activists also sought only to organize skilled workers, leaving the vast majority of the workforce out of the equation.

See this documentary as part of your celebration of International Workers’ Day.  You’ll go home singing.

[Alice Embree is an Austin writer and activist who serves on the board of directors of the New Journalism Project, is associate editor of The Rag Blog, and was a founder of The Rag, Austin’s legendary underground paper, in 1966. Alice’s new memoir, Voice Lessons, was published by the Dolph Briscoe Center for American History and distributed by the University of Texas Press.]