This Band Didn’t Start Off in Stadiums, You Know 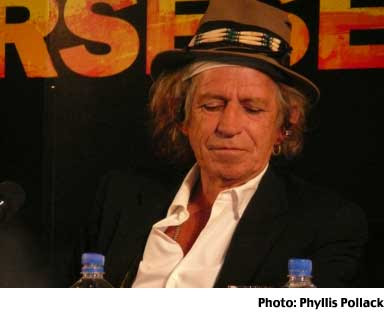 “When You Can’t Afford the Electricity, Baby, You Go Acoustic.”: The Stones Meet the Press
By Phyllis Pollack

The press conference with the Rolling Stones and Academy Award-winning director Martin Scorsese, held to promote the upcoming theatrical release of the documentary feature film, Shine A Light, took place on March 30 in New York City, on the fourth floor of the Palace Hotel. The room was filled to capacity, accommodating approximately two hundred members of the press that included myself.

The event followed a press lunch that was also held at the hotel. Members of the media were anxiously queued up, awaiting to hear what the Scorsese, who had directed films including Italianamerican, Taxi Driver, The Last Waltz, Raging Bull, The Color Of Money, The Last Temptation Of Christ, Goodfellas, Cape Fear, Casino, Kundun, Age Of Innocence and The Departed, and who had worked as an assistant director in the seminal film Woodstock, would have to say about working with the Stones. Needless to say, the members of the media, who were present, were looking forward to hearing the imminent statements that would soon be made by both the band and by the revered filmmaker.

The five icons, filmmaker Scorsese, Rolling Stones vocalist Mick Jagger, guitarists Keith Richards and Ronnie Wood, and drummer Charlie Watts entered the room. The conference began with the introduction, “Ladies and gentlemen, Martin Scorsese and the Rolling Stones,” to which they were greeted with extended, enthusiastic applause.

The highly anticipated media event lasted approximately twenty-four minutes, as the press conference was cut shorter than expected. Therefore, a limited amount of questions were allowed, due to the time constraint.

What transpired at the press conference moved quickly, as the red carpet premiere would be held soon after, just a few blocks away, at Clearview’s Ziegfeld Theater on West 54th St.

Here are some of the highlights from the press conference.

Question: To all five of you here, would you explain why was it important for you to make this film in a small venue in your native Manhattan? Was this audience special, and if so, why?

Scorsese: The importance of making the film in a smaller venue for me, I contemplated it. We discussed doing it in a bigger arena, and I looked into that, and actually while I was doing it, I was trying to prepare for that. I began to realize I think I’m better suited to try to capture the group on stage on a smaller stage, more for the intimacy of the group and the way they play together, the way you see the band work together, and work each song. I found that to be interesting, more than interesting. It is a compulsion of mine. I love to be able to see that, and to be able to cut from one image to another, movement and that sort of thing. And really, about the intimacy of the group, and how they work together.

Jagger: Why, I can’t remember what you said now.

Wood: They were all cameramen.

Scorsese: They enjoyed it. The cameramen liked it. Yeah.

Question: Keith, anything special about that night?

Question: Charlie, Do you want to try that? A special night?

Richards: I knew he’d say that.

This entry was posted in RagBlog and tagged Music, Popular Culture. Bookmark the permalink.