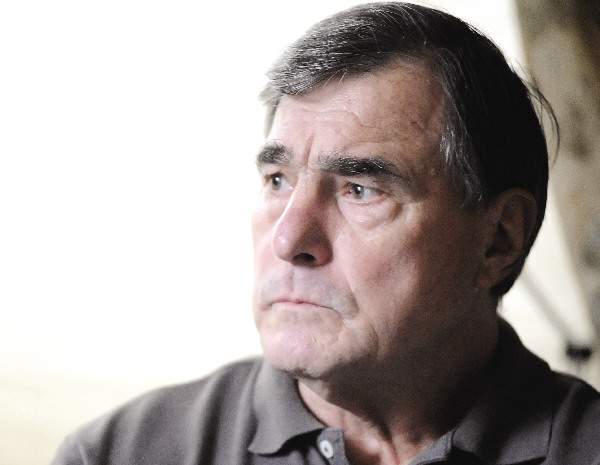 David Meggyesy, author of the classic football memoir, Out of Their League, is our guest on Rag Radio.

We talk about why he quit the NFL in 1969 at the peak of his career; his 25 years working with the players’ union and his role in bringing free agency to the NFL;  the “war games” nature and extreme violence of today’s football, including head injuries and brain damage, as well as domestic violence, bullying, and related issues; and the O’Bannon class action suit over rights for college athletes.

And why he thinks new Texas football coach Charlie Strong is “blowing it” with his strict disciplinarian approach to coaching.

Download the podcast of our August 29, 2014 Rag Radio interview with David Meggyesy here — or listen to it here:

David Meggyesy was an all-American linebacker at Syracuse University and for seven years, from 1963-’69, played for the St. Louis (now Arizona) Cardinals of the NFL. Meggyesy’s best-selling football autobiography, Out of Their League, was included in Sports Illustrated‘s 100 best sports books ever written.

The following is from a description of the classic memoir:

Dave Meggyesy had been an outside linebacker with the St. Louis Cardinals for seven years when he quit at the height of his career to tell about the dehumanizing side of the game — about the fraud and the payoffs, the racism, drug abuse, and incredible violence. The original publication of Out of Their League shocked readers and provoked the outraged response that rocked the sports world in the 1970s. But his memoir is also a moving description of a man who struggled for social justice and personal liberation.

The San Jose Mercury News called Out of Their League “the first critical look at the dehumanizing aspects of pro football.”

During his playing career Meggyesy was extensively involved in the civil rights and anti-Vietnam War movements. He co-founded the Esalen Sports Center and for 25 years was an organizer for the National Football League Players Association. David is president of the board of Athletes United for Peace, which was founded in 1980.

When he played for the Cardinals he got 35 of his teammates to sign a petition opposing the War in Vietnam. “The league was really supporting the war,” he says, “and there was a bunch of blowback” — which resulted in the team’s benching him.

‘Football is our mass entertainment theater and it’s our war games.’

“Football is our mass entertainment theater and it’s our war games,” David tells the Rag Radio listeners. “It supports militaristic values. Look at how the game is structured. It’s about taking and defending territory through violence.”

As West Coast coordinator of the NFL Players Association, Meggyesy played an instrumental role in bringing free agency to the players. “It was a sea change,” he says. “We fought an 11-year war with the owners and we beat ‘em.” Before free agency, he points out, the “players got 30% of the revenue; after free agency they made 70%.”

Meggyesy thinks Charlie Strong, the severe disciplinarian who has replaced the legendary Mack Brown as University of Texas football coach, “is blowing it.” He thinks Strong’s “Joe Hard-ass” approach is “rather insane.”

“He’s into this kind of mentality that football players can’t decide for themselves…that you have to punish them,” Meggyesy says. “I think you do the opposite. You try to encourage players to be responsible for themselves, for their team, not because they’re fearful of the coach or fearful of breaking a rule.”

“And I think if he keeps it up he’s going to have a hard time recruiting. I don’t think a lot of young guys want to go into that situation.”

Texas, Meggyesy points out, “is the most profitable franchise in college football.” College sports is a massive “sports entertainment business,” he says, “and they don’t pay the guys — so they make a lot of money. it’s not a bad business when you don’t have to pay the employees.”

We discuss UCLA basketball player Ed O’Bannon’s class action anti-trust suit against the NCAA for using and selling players’ names and images on video games and in other merchandising. “It’s the first shot across the bow,” Meggyesy says. College sports is a multi-billion dollar business, he says, “and what about the money [the players] generate?” He believes that “the system is finally starting to be cracked open” because of the pressure coming from O’Bannon and other athletes.

‘When you look at all the guys who were damaged out there, it wasn’t a hell of a lot of money.’

We asked David if the NFL’s $765 million dollar settlement over concussion-related brain injuries was adequate. Definitely not, he said, pointing out that Players Association president Kevin Mawae called it “hush money.” The owners knew a lot about what was going on with brain injuries, “but they kept the information from the players,” he says. “When you look at all the guys who were damaged out there, it wasn’t a hell of a lot of money.”

David, who once chaired a group of athletes calling themselves “Jocks for Joynts,” was quoted in the Ann Arbor Sun in 1972 as saying that “three quarters of the National Football League would be in jail if the marijuana laws were enforced,” adding that 75% of his teammates turned on regularly.

“A lot of the same issues exist now,” he tells us, pointing out that Cleveland Browns wide receiver Josh Gordon was just suspended for a year for violating the league’s substance abuse policy. “It’s just ridiculous. Why don’t they test the owners, the general managers, the front office staff, and see if they’re smoking reefer?”

“I had a great time playing football,” David Meggyesy told the Rag Radio audience.. “I think it’s a hell of a game. But you have to know what you’re getting into, and know that you’re going to be taken care of if you get hurt. Both during your career and after your career.”

David, who has lectured at more than 200 colleges and taught a seminar on Sports Consciousness and Social Change at Stanford, has been an advocate for change in professional and college sports and is a leader in developing a more comprehensive view of sport as a positive process for human growth and social transformation.

He has written extensively on issues regarding sport and society, and sport and human potential for publications like The New York Times and USA Today, and has appeared on ESPN, CBS Sports, HBO Sports, and more.

[Thorne Dreyer is an Austin-based writer, editor, broadcaster, and activist. A pioneering alternative journalist, Dreyer was founding “funnel” of the original Rag in 1966. Dreyer now edits The Rag Blog, hosts Rag Radio, and is a director of the New Journalism Project. Dreyer can be contacted at editor@theragblog.com.]