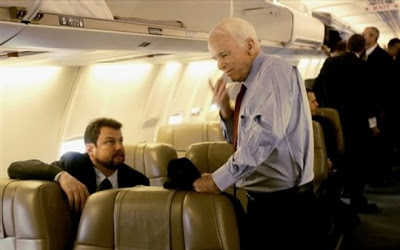 John McCain consults with lobbyist/foreign policy advisor Randy Scheunemann.
‘This is not a conspiracy theory but a conspiracy fact, stated as boldly as possible before it is too late’
By Tom Hayden / August 20, 2008

Barack Obama and the Democrats are heading towards trouble in November because of a new Cold War with the Russians triggered largely by a top John McCain adviser and the same neo-conservative clique who fabricated evidence to lobby for the Iraq War.

Because they are still mired in what Obama himself calls “old thinking”, the Democratic hierarchy and the mainstream media will have to be challenged to recognize the Georgia Conspiracy by the the faithful and clear-headed rank-and-file and the blogosphere.

Here are the short-term essentials:

* McCain has traveled to Georgia, nominated his “close friend” Saakishvili for a Nobel Prize in 2005, and was the first American leader “to blast Russia” last April when Vladimer Putin issued a sharp warning against NATO membership for Georgia and the Ukraine, supported by the US. [NYT, Aug. 18, 2008]

* The Bush administration was divided along familiar lines, with the pro-Georgia hawks centered in vice-president Cheney’s office, allied with McCain. The former group were foreign policy “realists” while the latter were enthusiasts for spreading “democracy” from Iraq to the Russian border.

* Randy Scheunemann, McCain’s foreign policy adviser was “registered foreign agent” for Saakashvili’s government from at least 2004, when Saakashvili came to power, until May 15, 2008, when he technically severed his ties to Orion Strategies, his lobbying firm. At that point, Orion had earned at least $800,000 in lobbying fees from Georgia. [W Post, Aug. 13, 2008]

* Saakashvili, with Scheunemann advising him, campaigned on a platform of taking back South Ossetia and Abkhazia.

* Scheunemann was Georgia’s lobbyist when Saaskashvili sent troops to retake two separatist enclaves, Ajaria in 2004 and the upper Kodori Gorge in Abhkazia in 2006, over strong Russian objections.

* Saaskashvili tarnished his democratic credentials by sending club-wielding riot police against unarmed demonstrators protesting his abrupt purging of the police, civil servants and universities in 2007, a replay of Paul Bremer’s decision to privatize Iraq in 2003.

Until now Scheunemann has been less-visible but no less important than any of the top neo-conservatives who drove America into Iraq and now are lobbying for a new Cold War and a McCain presidency.

He was the full-time executive director of the Committee for the Liberation of Iraq. He helped draft the 1998 Iraq Liberation Act which authorized $98 million for the “Iraq lobby” led by Ahmad Chalabi which disseminated bogus intelligence in the lead-up to war. He also worked for Donald Rumsfeld as a consultant on Iraq. He joined the board of the Project for the New American Century.

Scheunemann traveled with McCain to Georgia in 2006. Seeking to repeat his 1998 Iraq jackpot, he lobbied for an unsuccessful measure co-sponsored by McCain that year, the NATO Freedom Consolidation Act which would have sent $10 to Georgia.

He claims to have invented the phrase “rogue state rollback” for a 1999 McCain speech, an echo of the right-wing Cold War strategy of rolling back the Soviet Union. He has been a paid lobbyist or consultant for such presumed beneficiaries of “roll back” as Latvia, Macedonia, and Romania, as well as Georgia. Not to miss another opportunity, his firm has represented the “Caspian Alliance”, a consortium of oil and gas producers in the region.

It is unclear at this writing what links Scheunemann, as Georgia’s paid lobbyist, may have to the Western oil interests who in 2005 built the Baku-Tbilisi-Ceyhan pipeline through Georgia, a project intentionally designed to “bypass Russia” and implement an “American strategy to put a wedge between Russia and the Central American countries that had been Soviet republics.” [NYT, Aug. 14] The BTC consortium includes BP, Chevron, Conoco, and the state of Azerbejian. As conceived, the system also would attempt to link eventually with Israel’s pipeline system as well. [Ha’aretz, Jan. 17, 2008]]. Using the justification of pipeline protection, US Special Forces in 2005 trained 2,000 Georgian troops in anti-terrorism techniques. [Turkish Weekly, May 27, 2005] Scheunemann has been a lobbyist for BP America, and Sec. Condoleeza Rice, of course, has longstanding ties with Chevron, which even named a super-tanker after her.

But as evidence of the serious tensions within Republican circles, Schuenemann attacked Rice for “appeasement” of Russia over Georgia as recently as 2006. [Financial Times, Oct. 21, 2006] Now it appears that the Shuenemann-McCain faction has succeeded in pulling the US into an unwinnable military situation which is overflowing with political dividends for McCain and the Republicans.

In a nutshell, here is what should be said: the same Republican neo-cons who fabricated the reasons for going to war in Iraq are back, and now they have been paid to trigger a new Cold War with Russia that benefits John McCain. These are dangerous, expensive unwinnable games being played with American lives to benefit Republican politicians and their oil company friends.

These are not words you are going to hear from Barack Obama or anyone in the Democratic hierarchy. Looking back, they agree that the Iraq invasion was a colossal misjudgment. Privately, most of them feel that Georgia’s adventurism provoked the current conflict. But politically, they are pledged to be positioned as tough against terrorism and Russian communism, tougher than the Republicans.

This should be a red line for peace movement supporters of Barack Obama. We can live to fight another time on his proposals on Afghanistan and Pakistan. Nor can we play into McCain’s game plan, not with the Supreme Court at stake and a stronger-than-Obama Democratic majority poised to take over Congress. But this new Cold War is now, heating up by the day, and Obama could be its first political victim. It is even possible that McCain, alerted to the complicated dangers at home and abroad, will propose a “diplomatic solution” after he has squeezed as much benefit out of the Cold War revival that he can, to be resumed after he becomes president and tries to incorporate the Ukraine into NATO.

Until a leading Democrat summons the courage and vision, the peace movement and netroots will have to lead the battle against this attempt to reward the very people who brought us Iraq with another lease on power.

First, it will be necessary for millions of people to re-educate themselves in the history and perils of the Cold War. Fortunately, we don’t have to repeat the communism/anti-communism debates that divided America and defeated Democrats for decades. No one defends Russia as a democratic example. The real question is as old as 1917 or 1945: can and should the US attempt to strangle Russia through reckless pro-Western privatization schemes combined with installing military bases – now including Pershing missiles – on its western and southern borders. And the question is as old as 1967: why was John McCain bombing Vietnam in the belief that it was a pawn of the Soviet Union? Why did our government and a majority of Americans fall for the same misleading pretext for that war?

The Republicans and neo-conservatives should be asked this puzzling question: whatever happened to your triumphal claim that Ronald Reagan won the Cold War by destroying the “evil empire”? Evidently they were seeking nothing more than Russia’s natural resources and complete subjugation by NATO. There was no limit to what their superpower mentality thought possible.

Among those who caused this current debacle too were the Democratic Party’s “humanitarian hawks”, who promoted the NATO military intervention in the Balkans with the dream of creating an independent Kosovo in Russia’s historic sphere of influence. That war would have been a disaster if the US [under Clinton] had sent ground troops. But Russia pulled back its support of Belgrade after three months of US bombing. That was perceived as Russia’s weakness and the birth of a new “uni-polar” world. Then came the giddy enlistment of former Soviet-bloc countries in NATO – the “new Europe”, as Rumsfeld hailed them. The Russians were clear in warning that they could recognize places like South Ossetia if the West could carve out Kosovo, but the superpower was deafened by the delirium of success. It was to be “the new American century”, a resumption of the march to the free-market millennium first announced on the Time cover at the beginning of the Cold War.

The initial goal of the principled rank-and-file peace movement should be to devise a persuasive message against the reckless adventurism of the resurgent McCain/neoconservative crusade and bombard the “realist” foreign policy school, from think tanks to editorial boards to senior members of Congress, with questions that widen the current climate of debate.

If Obama had a paid lobbyist for a foreign country on his Senate staff, what would the Republican outcry be?

If John McCain is above the special interest lobbies, why is he harboring Scheunemann? Is it enough to go off the Georgia payroll and over to the McCain campaign payroll during a regional war you helped set off?

Is Scheunemann as reckless as Saakashvilishi and McCain, in his own way? Besides his work for the Iraq lobby and the Georgia government, Scheunemann was the lobbyist for the National Rifle Association and the Sporting Arms and Ammunitions Manufacturers, and just nutty enough to be arrested for possession of an unregistered shotgun in the US Capitol – after a duck-hunting trip, of course. [Washington Times, Feb. 5, 1997.]

Obama supporters should step up their criticism of his hawkish mimicry of McCain, and consider lessen their support though still voting for him, unless he distinguishes himself from McCain on the immediate crisis.

At the very least, Obama can stop going out of his way to celebrate McCain as a great American war hero, which only reinforces McCain’s strongest rationale for victory. And Obama’s surrogates might delicately suggest that McCain shoots before he thinks. McCain was the pointman pushing the neo-conservative war against “islamo-fascism”, centered in Baghdad, months before the Bush Administration revealed its intentions. While Obama urged caution about a “dumb war”, McCain was supporting Ahmad Chalabi’s “misleading assertions” about weapons of mass destruction and Iraq-al-Qaeda ties that didn’t exist. [NYT, Aug. 17]

The broad peace movement has to awaken a burning memory from below. Everyone recalls George Bush declaring “Mission Accomplished”, but does anyone recall John McCain standing on another aircraft carrier on January 2, 2002, yelling to young Navy pilots like himself during Vietnam, “Next up, Baghdad!” #

TOM HAYDEN is the author of Ending the War in Iraq [Akashic] and Writings for a Democratic Society [City Lights].