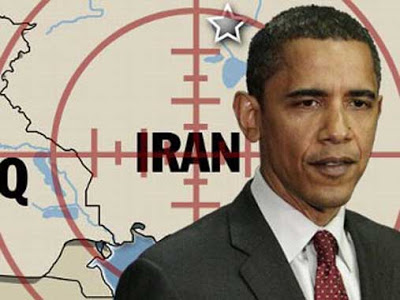 Image from Antinews.
Preventing the coming war with Iran

Rational self-interest is not always enough to prevent what Barbara Tuchman has called ‘the march to folly.’

Peace and justice activist Tom Hayden and Rag Blog editor Thorne Dreyer will continue their discussion on Rag Radio this Friday, January 20, 2-3 p.m. (CST) on KOOP 91.7-FM in Austin, and streamed live to the world. To listen to our January 6, 2012, interview with Hayden, go here.

During the past decade, this writer has remained skeptical about prospects of a U.S.-supported war against Iran. The potential costs outweighed the benefits. Now, as the 2012 election year unfolds, I am not certain. The political and geopolitical dynamics underscore the growing threat of war.

It’s not that Barack Obama wants an airstrike against Iran, whether by the Israelis, the Americans, or the Israelis with covert U.S. support. My respected friends Juan Cole and Mark Weisbrot are not so sure. They think Obama is laying the groundwork, and they may be right.

Obama hardly needs another war with unknown costs and consequences. But presidents are not all-powerful, and Obama can be forced to acquiesce unless there is a sharp increase in serious public opposition. As Trita Parsi, director of the National Iranian American Council, told Democracy Now on January 12:

Here’s the dynamic at work:

First, the Israeli government and the powerful Israeli lobby, in evaluating the Arab revolutions in Egypt and beyond, are extremely concerned that time is against them. They perceive the diplomatic efforts of the Palestinians to secure United Nations recognition as a mortal peril, and went to great extremes to pressure Obama to threaten a veto of the Palestinian bid.

This was an overreaction inimical to U.S. interests, leaving the Obama administration extremely isolated from the rest of the world on these issues. Employing a U.S. veto threat played into the hands of all those in the Palestinian and Islamic worlds who believe that armed struggle is the only path open to them.

Second, the Israeli Lobby, or AIPAC, already has learned that Obama is isolated at home, or at least from Congress, on these questions. Obama was forced under pressure to back down on his demand for an end to settlements. His more progressive appointees, whether Chas Freeman or George Mitchell, were forced from their positions or resigned in frustration.

Third, the Iranians have been far from helpful, if they ever intended to be. They reinforce the depiction of themselves as irrational, unstable, fundamentalist, theocratic extremists. Any ideas that they are rational actors in an ongoing crisis — which began with the U.S. overthrow of their democratically-elected government in 1954; which continues to threaten regime change on a daily basis; in which the Israelis have scores of nuclear weapons available for use — are dismissed as fuzzy foolishness.

Fourth, and most important at the moment, the Israeli Lobby is using the Republican Party as a Trojan Horse. Mitt Romney is a former business partner of Benjamin Netanyahu (see the excellent screed at Daily Kos). And if the Romney-Netanyahu alliance doesn’t work out, there’s always Newt Gingrich to call the Palestinians an “invented people,” the better to collect millions from his chief financier Sheldon Adelson, a Las Vegas casino developer, and close ally of Netanyahu.

Adelson, who says the Palestinians have no historical claims to statehood, just saved Gingrich with a $5 million bailout for the South Carolina primary, on top of millions more, including $7 million to Gingrich committees in 2006 alone. Adelson not only saved Gingrich this month, but his free newspapers in Israel are credited with having saved Netanyahu, too. (The New York Times, January 10, 2012)

Fifth, the latest rationale is “Time To Strike Iran” in the current issue of Foreign Affairs, by Matthew Kroenig, who until July was Obama’s special adviser on Iran at the Pentagon.

Koenig asserts that the U.S., not Israel, should attack Iran as the least-bad option. Koenig claims the goal should not be regime change, but merely the careful destruction of Iran’s nuclear sites. He assures us that an attack on Iran’s Natanz nuclear facility with a 30,000 pound bunker-busting bomb can be so carefully done that Teheran will not react by closing the Straits of Hormuz or launch missile assaults on European cities. The U.S. should assure Iran that we have no interest in overthrowing their government, only in destroying their nuclear facilities.

Sounds neat, and perhaps Kroenig should not be dismissed as a Dr. Strangelove. But if the U.S. considers Iran’s leadership irrational now, why would Teheran become more reasonable after being attacked at Natanz, Isfahan, Arak, and centrifuge-manufacturing sites near Teheran itself? (The target list is Kroenig’s.)

As the presidential campaign proceeds, Obama will be hammered by Romney and/or Gingrich, backed by the neocons and Israeli hawks, who will be legitimized by mainstream media commentary about Iran’s alleged menacing intentions. In the deep background there are concerns about oil supplies in the Straits of Hormuz. There may be an October Surprise.

Who will back Obama against these pressures, especially if they seem to threaten his re-election? At this point, there is no serious organized opposition, although public opinion is on his side.

There may be 200 House members against Iraq and Afghanistan, but few if any against striking Iran. The media prefers sanctions and diplomatic pressure but will not draw a red line against military intervention. The humanitarian hawks want regime change. Russia, China, and the UN General Assembly count for little in American presidential elections. That leaves Ron Paul and a small unfunded anti-war chorus of protesters.

The national security and diplomatic implications may be too great to permit a U.S.-Israeli intervention. But rational self-interest is not always enough to prevent what Barbara Tuchman has called “the march to folly.” Only a serious campaign to protect Obama from repeating the same concessions to neocon pressure that led to Iraq and Afghanistan might have a chance in 2012.

Perhaps the clergy should lead, the intellectual experts should engage and, at the grass-roots level, the peace movements in both Israel and America will expand a serious dialogue in the Jewish communities — and all communities —where reason might prevail against extremism.

Otherwise, the barking you will hear all this year is from the dogs of war.