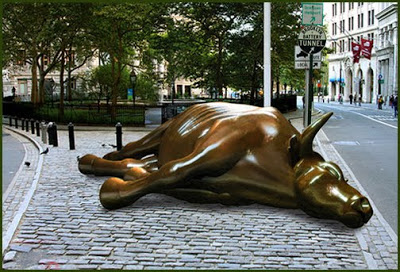 The fallen bull. Image from Tumblr.
A legacy of Occupy:
Sticking it to Wall Street

The Occupy movement energized a vanguard of voters to become more populist in their demands.

It is unfortunate that Occupy Wall Street lost its momentum after the uprisings of 2011, because the election and its results have opened another opportunity to stick it to Wall Street and choke and reform the “great vampire squid” for another next generation. As I wrote six months ago in The Nation:

This year marks the first presidential campaign in our lifetime when the gluttony of Wall Street, the failures of capitalism, the evils of big money in politics and a discussion of fundamental reform will be front and center in election debates. No doubt the crisis that gave rise to Occupy will not be fixed by an election, but that’s beside the point. Elections produce popular mandates, and mandates spur popular activism. It’s time to organize a progressive majority.

From the general Occupy standpoint, Obama was just another Wall Street candidate, and the elections did not matter much anyway. That is a tragic view to take, since it robbed Occupy of an occasion to take credit and feel empowered — “Fired up! Ready to go!” as the Obama multitudes say. In fact, Occupy did influence the election, did influence the outcome, and did shape the mandate, without, in most cases, its members even voting for Obama. Hopefully they will try to shape the terms of the bailout ahead.

The Occupy movement influenced the political climate in which Obama and his advisers chose to attack Romney as an agent of Bain Capital; incidentally, against the strong preferences of such powerful Democratic figures as Bill Clinton and Cory Booker, the Newark mayor who publicly said he was “nauseated” by the president’s attack on private equity.

The Occupy movement energized a vanguard of voters to become more populist in their demands. The Occupy movement surely helped make it possible for Elizabeth Warren to ride the wave to Washington. And those were only some of the aftershocks of Occupy long after it faded from the streets and headlines.

Wall Street, which did everything in its considerable power to turn on and defeat Obama, now thinks it is “time to mend fences.” (New York Times, November 8, 2012) But if Obama and Axelrod retain any of their Chicago political instincts, there should be some payback before any mending takes place. If Obama is forced to compromise his preferences on the fiscal cliff, reforming Wall Street is where he should be able to implement his words from the campaign trail.

If Obama had to stock his cabinet with Wall Street players in order to avoid total economic disaster in 2009, now he can offer some new choices and directions. Where is Ralph Nader when we need him?

Obama should stick it to Wall Street and make it hurt so badly that they will never forget the screws in this lifetime.

Wall Street lobbyists are already preparing a “lobbying frenzy” against the administration’s tentative plan to “apply derivatives rules to American banks trading overseas.” (New York Times, November 8, 2012) As Obama promised long ago about health care, such Wall Street plans should be exposed on television at every turn because, like mushrooms, they only grow in the dark.

This opening of the process for all to see can be achieved if there is aggressive monitoring of a U.S. senator. Wall Street somehow thinks its world will conveniently go dark as they lobby in stealth to weaken the Volcker Rule, contain the Commodity Futures Trading Commission, and legislate a diluted authority for other key agencies.

The opportunity to prolong the recent ideological and values debate may increase, not subside. On the left, an opportunity still exists to enter the debate loud and clear with concrete demands.

To “occupy” Wall Street is no longer a policy demand, if it ever was. Extending democracy to Wall Street might be a better and bolder banner — with proposals for greater disclosure, accountability, regulation in the public interest, a ban on secret donors to campaigns, a Robin Hood transactions tax, and a long state-by-state campaign to eliminate the Citizens United decision.

The theme song might be Leonard Cohen’s “Democracy Is Coming to the USA.”