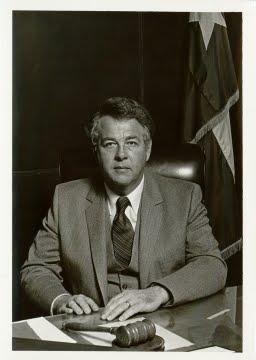 On the Texas Supreme Court he showed his values and commitments had not changed and Texas was better for it.

It seems like most of my contributions to The Rag Blog have been inspired by the death of someone I knew and who had an influence on my life. So here we go again.

The day before the national election former Supreme Court of Texas Judge Bill Kilgarlin died in New Mexico. He had been one of the best judges to serve on that court during my professional life, nearly 50 years. He wrote decisions recognizing and defining some much needed law around the Bad Faith doctrine, which gave a consumer a cause of action against an insurance company that acted in bad faith to decline or try to underpay benefits, standard practice.

So of course the insurance companies put up big bucks to beat him and all the other people-oriented judges on the Texas Supreme Court, making it one of the worst high courts among the states. They proceeded to undo the law and create one of the more calcified, business-oriented courts to be found anywhere. And so it has continued for the last 25 or 30 years. No Democrat has been elected to it in many years.

This history is probably Bill’s legacy. But to me he was a jovial companion, onetime roommate in law school, and perhaps, above all, a big — literally and figuratively — player in two activities that stand above most of the stops along my way. One was scholastic debate and the other was the Young Democrats.

When I met Bill in the late 1950’s he was coaching debate at the University of Houston. It was probably at the Tulane college debate tournament where my colleague (as we called our partners in competition) and I, representing SMU, met the UH team in the final debate. The Kilgarlin-coached team beat us for the big trophy but I left New Orleans with a new friend. Shortly afterwards he was elected to the Texas House of Represntatives.

All of the time I knew Bill he was never so impressed with his status (he accomplished much and was well recognized for it) that he changed in how he related to friends. Nor was he reserved in sharing a pitcher of beer or celebrating an election victory. There was once a radio program called “Just Plain Bill” and it could have referred to Kilgarlin.

One example of this occurred on a steamy night in the summer of 1960. I had been in Houston with two old friends from high school days, swilling beer and carrying on, when I got into a serious argument (over money) with the guy in whose car we came to Houston. Long story short, he left me on the side of the road on South Main in a mosquito-patrolled ditch. Worse, I was broke and it was light years before cell phones.

In my beer-saturated state I could only wonder what I could do. I hardly knew anyone in Houston even if I could somehow find a phone number and call for help. I went across the street to a seedy motel where a compassionate clerk allowed me to use the phone directory and his phone to call Bill Kilgarlin. Without hesitation he came and picked me up.

I stayed over in the house where he was staying, his parents’ modest home. I was able to clear my brain and took nourishment. And to my shock, Bill offered to take me back to Austin in his incredible classic Rolls Royce, or whatever the thing was.

I thought of the guys who abandoned me in a ditch and of Kilgarlin — two different kinds of friends. He was still a member of the legislature at that time but he loved a good party and we found several in Austin in the next few days.

The atmosphere of that time among Austin liberals is captured perfectly in Bill Brammer’s classic novel, The Gay Place. I don’t remember a character one might have recognized as affable, fun loving Bill Kilgarlin, but surely he was the inspiration for some of Brammer’s Austin partiers. 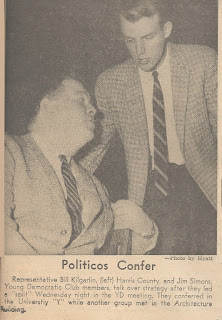 After a split in the Young Democrats, Bill Kilgarlin (left), then a Harris County State Representative, and Jim Simons confer at the University YMCA. Photo by Hyatt. Image from the Daily Texan, fall of 1959.
One thing Bill loved to do at Scholz Beer Garten was to stand on a table and bellow out operatic arias or drinking songs. His refrain would reverberate thoughout the legendary Austin watering hole. In the late fall of 1960, Kilgarlin and I combined with two other friends in law school to rent a big old house right behind Scholz’s.

Beginning in 1959 when I came to the University of Texas and Bill was in law school, we were on the same side in the factional battling of the Young Democrats. We were solidly aligned with the more liberal group that statewide included Oscar Mauzy, David and Ann Richards, and many other stalwart folks such as Austin’s new tax assessor-collector Bruce Elfant’s parents, Martin and Eileen Elfant.

In so many ways, it was a fantastic group of political people and for the next five years we caroused and schmoozed both at YD functions and in bars across the state of Texas. Both Kilgarlin and I served as statewide YD officers in those years. Only in the much more serious and purposeful days of the Movement later, in the ‘60s, would I ever be that close to a group of like-minded people.

I would have a hell of a time picking which association was more fun. Like Emma Goldman, my revolution must allow dancing. I thought then that those people, with whom so many all-night strategizing sessions and all-day beer parties had illuminated my young life, would forever be my dear comrades.

But the day did come when I had to leave a meeting of liberals in 1967, the Democrats of Texas, because they were too weak-kneed or determined to avoid a subject that could diminish their chances of electing a Governor, to take a stand on principle and condemn the war in Vietnam. My friend and brother in the Movement (then new to us) Martin Wiginton and I walked out and left behind some of our best friends and allies of past political skirmishes.

It was the beginning of new strategy with new younger allies on the anti-war and civil rights fronts. New and just as deep, or deeper, bonds would be forged in the ensuing years. A radical vision and more determined assault awaited.

Bill Kilgarlin was about seven years older than me and he never left the so-called mainstream of liberal politics except, some argue, to compromise himself to then-Governor Dolph Briscoe and get himself appointed to a district judgeship in Houston around 1976. Later on the Texas Supreme Court he showed his values and commitments had not changed and Texas was better for it.

I hardly saw him at all over the last couple of decades. He moved to Santa Fe after being defeated in the special interest coup d’état of the Texas courts by the forces of darkness. Whenver I did see Kilgarlin, it was like there had been no gulf of time between us. He was as friendly and engaging as he was at the Tulane debate tournament of 1958, or in the Young Democrat wars and parties or as my roommate in that house far too near to Scholz’s for me if I wanted to get through law school.

I am glad he enjoyed his privacy, his operas, and his wine for the last years of his life in New Mexico. Most of all, I am glad to have known him.