Tom Hayden :
The Taliban are winning

This war never should have happened because it was always unwinnable, unaffordable, and therefore unpopular. 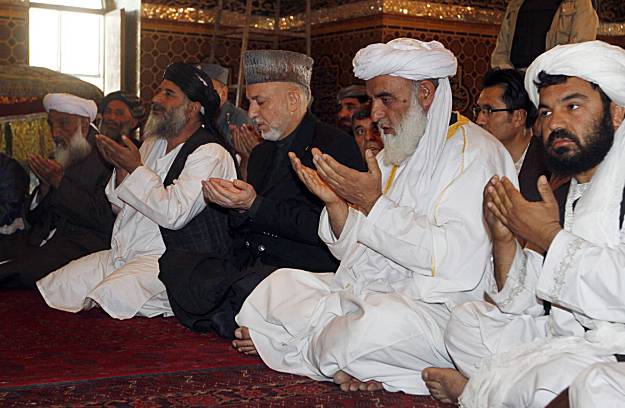 Karzai meets with representatives of the Taliban. Image from Jihad Watch.

The U.S. national security elite, mainstream media, and therefore most of the American people, are in strategic denial of the fact that the Taliban are winning the war in Afghanistan.

Why is the denial “strategic”? Because our government and military establishment cannot easily admit failure without damaging our superpower status and their multiple careers. However, such a denial also risks never learning the lessons.

Defeat has multiple possible meanings. It doesn’t mean the insurgents will overrun Kabul any time soon. It is possible, however, that the Afghan security forces will implode along with the Humpty-Dumpty regime of President Hamid Karzai.

The likeliest possibility is the Taliban ruling over vast swaths of the southern and eastern regions, outside the authority of the Afghan state, leaving Afghanistan partitioned for an indefinite interval.

The point is that the United States is withdrawing ground troops from Afghanistan without vanquishing the Taliban. Since the Taliban are not losing, they are winning. 150,000 U.S. and NATO troops have failed to dislodge them, and by many accounts, have only strengthened their will to fight on. Fatalities among the U.S.-supported Afghan soldiers, more and more on their own, have doubled in the past year.

The U.S. and NATO are falling into the graveyard of empires.

The U.S. and NATO are falling into the graveyard of empires. Pity the American military families and the feminists. The cynical hope of Washington planners is that the collapse happens after 2016, not before.

This war never should have happened because it was always unwinnable, unaffordable, and therefore unpopular. Starting under Bush and the neocons, it became a liberals’ war, which recruited feminists, humanitarian hawks, soft-power enthusiasts and Democrats afraid to be blamed as soft on terrorism.

President Barack Obama felt compelled to escalate the war before deescalating it. Obama’s calculation, widely shared in the Beltway, was that it was impossible during the 2008 presidential campaign to pledge that he would withdraw from two wars, Iraq and Afghanistan. He bought time in Afghanistan, but now that time is rapidly running out.

Afghanistan was framed as the “good war.” No one’s saying that now. Similarly, Republicans go to great extremes to bury their memorable description of Iraq as a “cakewalk.”

The latest news in the interminable debate over how to withdraw is whether Obama should leave behind 3,000 troops to defend Kabul and Bagram to prevent the comeback of Al Qaeda, or 10,000 soldiers, the Pentagon’s minimum recommendation. NATO is expected to add a small additional number, mainly Germans and Italians.

The paltry numbers are nothing but a political prophylactic to defend our decision makers against the fear of Afghanistan’s badlands becoming a sanctuary for Al Qaeda once again. More specifically, the White House is terrorized by the political threat of another 9/11 plot. Those are understandable fears, but they could apply equally by now to Pakistan, Iraq, Yemen, all of North Africa and, say, any Muslim ghetto in Europe. Maybe the Bronx or Dearborn.

Now it’s revealed that Karzai has “a cozy history with the Taliban,” according to Sarah Chayes, a longtime national security adviser to General David Petraeus and the Joint Chiefs, and who has lived for years in Afghanistan. The Americans are furious that Karzai has released 72 insurgents from Bagram and rejected a status-of-forces agreement with the U.S., just when the appearance of a Western-style presidential transition was being orchestrated.

However, the smoke-and-mirrors stage management continues. The current front-runner to succeed Karzai is Ashraf Ghani, a neoliberal World Bank economist formerly advised by James Carville. May Allah help him. Recent U.S.-funded audits, which American officials tried to keep quiet, concluded that none of Afghanistan’s 16 ministries,” could be counted on to keep (aid) funds from being stolen or wasted.”

And oh, have you heard that the Afghan opium production is rising by 49 percent, and that the biggest beneficiaries are the Taliban? “‘We have failed, we have lost — that’s all there is to it,’ said one Western diplomat, speaking on the condition of anonymity so as not to offend Afghan government officials.”

Heavens no, we would not want to offend those Afghan officials. That would be like calling their government a basket case, and such comments should remain private.

Thankfully, 66 percent of the American public now rejects this war as not worth fighting.

Thankfully, 66 percent of the American public now rejects this war as not worth fighting. When Americans realize that current planning calls for another four to six billion annually for the Afghan forces, those numbers are likely to rise. Obama is on solid ground in suggesting that enough is enough, and opposing a “forever war.”

Yet the question of an exit strategy remains, if only to neutralize the rise of dangerous chatter about “losing Afghanistan,” a toxic theme of American politics since the Chinese Revolution.

Obama needs to ask himself in one of his private moments, what on earth are so many white Western North Atlantic people doing trying to police Southern Asia? If he leaves a few thousand Americans behind, as “monitors” or “advisers,” he will be risking their lives on short-term counterterrorism adventures.

He should remember that not too many years after the humiliating fall of Saigon, diplomatic and commercial ties were resumed with Vietnam, and the Vietnamese today see the U.S. as a balancing force against Chinese expansion.

And above all, Obama should continue his “conversation” with the American people about the limits and costs of an empire. With urgent rationales for new American military interventions filling his message box, Obama will be fortunate if he avoids going over the brink. The imperial appetite is restless, and temptation seems everywhere. Imagine if John McCain were president. Even the mainstream media worries about that.

It’s probably too much for power-wielders to admit mistakes. Only the public seems to get it. Has anybody in the Beltway heard of cutting your losses? That’s what it takes.

[Tom Hayden is a former California state senator and leader of Sixties peace, justice, and environmental movements. He currently teaches at Pitzer College in Los Angeles. His latest book is The Long Sixties. Hayden is director of the Peace and Justice Resource center and editor of The Peace Exchange Bulletin. This article was also published at TomHayden.com. ]