Torture. Such a Simple Word. Why Not Use It? 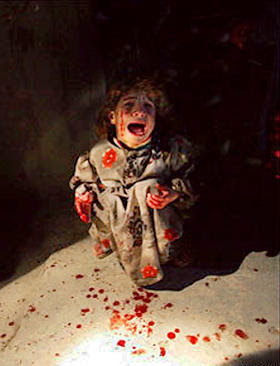 LOS ANGELES–In last week’s column I cited New York Times reporter Eric Lichtblau as a prime example of what ails us: reporters who don’t report, a.k.a. journalists who love the government too much.

When Lichtblau found out that the Bush Administration was listening to Americans’ phone calls and reading their e-mail, he decided to hold the story. Instead of fulfilling his duty to the Times’ readers and running with it, he asked the White House for permission. By the time the NSA domestic surveillance story finally ran, 14 months had passed–and Bush had won the 2004 election.

Again, in a May 17th piece bearing the headline “FBI Gets Mixed Review in Interrogation Report,” Lichtblau is running interference for the government. “A new Justice Department report praises the refusal of FBI agents to take part in the military’s abusive questioning of prisoners in Guantánamo Bay, Iraq and Afghanistan,” begins the article, “but it also finds fault with the bureau’s slow response to complaints about the tactics from its own agents.”

According to the Justice Department report, “routine” treatment of Guantánamo prisoners–witnessed by the FBI–includes “bending the detainee’s thumbs back and grabbing his genitals.” Military and CIA torturers chained detainees’ hands and feet together for as long as a full day, “left to defecate on themselves.” They terrorized them with dogs, stripped them and made them wear women’s underwear and subjected them to blaring music, freezing cold and searing heat.

Torture. Such a simple word. Why not use it?

Lichtblau’s “mixed review” appellation notwithstanding, the report by the Justice Department paints a shocking, uniformly negative portrait of a federal law enforcement agency whose officers react to appalling conduct with the Nuremberg defense–“I was just following orders.”

“Indeed,” reported U.S. News & World Report, “time after time, the report concludes that FBI agents saw or heard about numerous interrogation methods–from sleep deprivation to duct-taping detainees’ mouths to scaring them with dogs–that plainly violated their own agency’s code of conduct.” (Not to mention the Geneva Conventions.) Rather than report their scruples to someone who might raise hell and put a stop to the systemic torture at Gitmo and other U.S. concentration camps–i.e., the public–FBI agents turned to the criminals. Just like Lichtblau did with domestic spying.

“When [one] agent mentioned [a torture] incident to the general [at Guantánamo], the general’s response…was ‘Thank you, gentlemen, but my boys know what they’re doing.'” Ultimately the FBI, worried that agents could be charged with war crimes if they continued to witness the torture by CIA operatives and mercenaries, pulled its employees out of Gitmo and other camps. No one called a Congressman. None called a press conference.

In 2003 one FBI agent had “begin building a rapport” with Yussef Mohammed Mubarak al-Shihri, a Saudi citizen. Al-Shihri told the agent that female CIA agents had “forced to listen to the ‘meow mix’ jingle for cat food for hours and had a women’s dress ‘draped’ on him.” As usual, the agent turned to the torturer. “The agent said he confronted a female military intelligence interrogator who admitted to ‘poaching’ his detainee, but there was little more the agent could do. Following the incident, al-Shihri became uncooperative, and the agent said he never bothered to tell his superiors about the military interrogator’s actions.”

Turning a blind eye to torture. Watching passively as CIA goons destroy the trust of a possible material witness to terrorism. What “mixed review”?

As usual, the Newspaper of Record’s worst sins in Gitmogate are those of omission–the really weird stuff that could deprive the Administration of its few remaining supporters. “Buried in a Department of Justice report,” reported ABC News, “are new allegations about a 2002 arrangement between the United States and China, which allowed Chinese intelligence to visit Guantánamo and interrogate Chinese Uyghurs held there.”

Like their Tibetan neighbors, the Uyghurs of western China are victims of government oppression, including mass executions. Throughout the 1990s, U.S.-funded Radio Free Asia urged Uyghurs to revolt against Chinese occupation. After 9/11, however, the U.S. agreed to help China capture and torture Uyghur independence activists–as a quid pro quo for not using its U.N. veto to stop the American invasion of Afghanistan. (There’s more about the U.S. betrayal of the Uyghurs in my book “Silk Road to Ruin.”)

It’s a tale bizarre enough to make Rush Limbaugh blush: intelligence agents from communist China invited to an American military base, where they’re allowed to torture political dissidents in American custody, with American soldiers as their sidekicks. In light of China’s crackdown on Tibet during the run-up to the Olympics, it’s a tasty news tidbit. But it didn’t run in The Times–as far as I can tell, it only ran in one newspaper, the Christian Science Monitor.

At the same time journo-wimp Lichtblau was penning his “balanced” take on the Justice Department’s bombshell report, the U.S. government admitted that it has more than 500 children in its torture and concentration camps. More than 2,500 children have gone through U.S. secret prisons since 2002, including at least eight at Guantánamo.

I know a lot of right-wing conservatives. We don’t share much political common ground, but it’s hard to imagine any of them thinking the indefinite detention and torture of children, against whom there is no evidence whatsoever of wrongdoing, is anything other than the behavior of a monster.

If a man screams in a government torture chamber, does he make a sound? Not if the only one who hears him is an American reporter.

Ted Rall is the author of the book “Silk Road to Ruin: Is Central Asia the New Middle East?,” an in-depth prose and graphic novel analysis of America’s next big foreign policy challenge. Visit his website http://www.tedrall.com/.

This entry was posted in RagBlog and tagged Conspiracy, Media, Military, Torture. Bookmark the permalink.