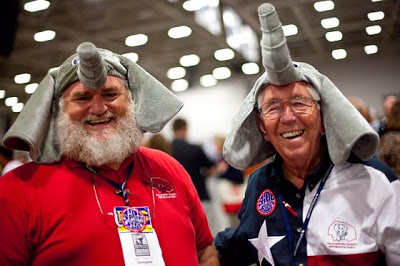 The Texas GOP supports ‘repeal of the Sixteenth Amendment,’ which instituted a national income tax, and instead favors a wildly regressive national sales tax that would hit low- and middle-income Americans hardest.

The Republican Party of Texas released its 2012 platform this month, outlining its policies on taxation, education, and a host of other issues related to the economy.

Texas Republicans, according to the platform, support eliminating the minimum wage and the prevailing wage, doing away with the Department of Education and Department of Energy, and “reducing taxpayer funding to all levels of education” — but those aren’t even the most damaging positions.

Here’s a look at the five most outrageous beliefs Texas Republicans hold:

The Texas GOP supports “repeal of the Sixteenth Amendment,” which instituted a national income tax, and instead favors a wildly regressive national sales tax that would hit low- and middle-income Americans hardest. It also favors making the Bush tax cuts permanent and repealing the capital gains tax and the estate tax, the latter of which it claims is “immoral and should be abolished forever.” On the state level, it supports abolishing property and business taxes, and property taxes on inventory, and opposes efforts to institute a state income tax, an Internet sales tax, professional licensing fees, and taxes on real estate transactions. Instead, it supports “shifting the tax burden to a consumption-based tax.”

Texas Republicans also have radical policies on LGBT issues, voting rights, and health issues like sex education, and Jessica Luther has a  run-down (in T weets) of the entire platform’s extreme positions. Misty Clifton, at Shakesville, did an epic breakdown of the Texas GOP’s 2012 Platform