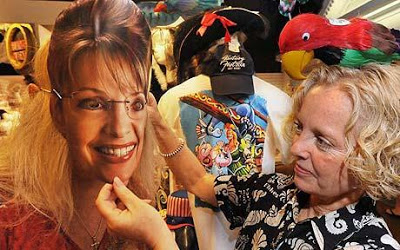 McCain can have only two hopes left in 2008: the Bradley Effect is stronger than anybody imagines or Osama bin Laden does him a favor just before the election by hitting the US in some manner.

Barring one of those happenings, that’s it for McCain. He will have been destroyed twice by Karl Rove politics, from the outside in 2000 and from the inside in 2008. But we have not seen the last of Palin.

Prediction: Palin will be a contender for the Repug presidential nomination in 2012.

Whether she will get it depends on what the conservatives do after this election. By this I mean the textbook economic/foreign affairs conservatives who have never been comfortable with the bedroom police.

Right now, the conservatives are either jumping ship to Obama or staying home on election day.

If they return to the Repugs, they will have to contest with the evangelicals for the soul of the GOP.

If they do not return, Palin will get the nomination. The only one who can contest her is Huckabee, and he’s too good-natured for that crowd. Anger beats good nature every time in that demographic.

That begs this question: if thinking conservatives do not return to the GOP, where do they go? I expect a few high profile ones will have jobs in the Obama administration but they will not be running things, so I don’t know if the Dems can hold them. But the evangelicals don’t trust them. So do they form a new Whig party or something?