Sarah Palin : Queen for a Day (Or Two) 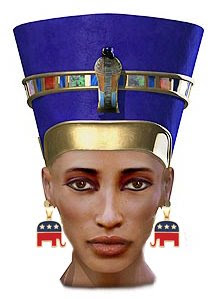 ‘In Obama’s absence, the McCain-Palin campaign continued to self-implode.’
By Larry Ray / The Rag Blog / October 26, 2008

Less than a dozen days till the presidential election. A fiction writer couldn’t have come up with the political plot changes of the past two months. I will be glad when something else dominates the news but for now the down-to-the-wire dynamics of this presidential race still offer a smorgasbord of story possibilities. For instance, imagine a U.S. presidential candidate calling a break from campaigning a dozen days before election day. Barack Obama left the campaign trail for two days and flew to visit his critically ill grandmother in Hawaii. It was a last visit with the beloved woman who guided his early life. He then jetted back to the mainland to resume campaigning.

In Obama’s absence, the McCain-Palin campaign continued to self-implode. Headlines focus not upon their constantly changing message, but upon details of fleshed-out GOP campaign financial filings with the Federal Election Commission. The Republican National Committee has already lavished $150,000 for luxury shopping sprees to clothe America’s Hockey Mom and her tag-along family. RNC campaign cash for Mrs. Palin still gushes forth. The New York Times reports a dazzling new GOP tab and it’s a beauty. The top salary paid in the first half of October was not to a McCain campaign strategy Guru, but to a makeup artist.

The two week stipend for the haute blush-dauber was $22,800 just to dandy up the Hockey Mom’s face for the bright lights of arena halls and news photogs. Queen Nefertiti should have looked so good. Her hairdo was a bargain basement deal with the Cindy-McCain-recommended California salon stylist being paid only ten grand, reported by the RNC as “Communication Consulting” for those two weeks. The GOP is making up Sarah Palin but The NY Times is not making up anything. And America is getting the message.

The faithful right wing voter base still overlooks McCain’s increasingly frequent senior moment gaffes, but his VP choice has gone beyond the Pale in the minds of huge numbers of the faithful. Coughing up that much donated cash to doll up a dud with more than lipstick has struck a nerve with decided as well as undecided voters.

4 Responses to Sarah Palin : Queen for a Day (Or Two)