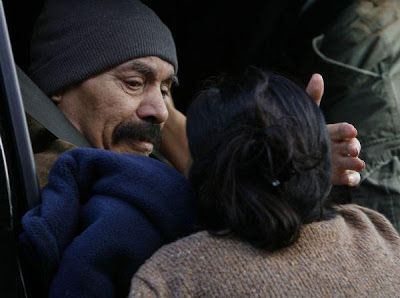 Tarek Darwish kisses his wife Nahida Mahmoud goodbye outside the family’s apartment. For for Iraqi attorney Tarek Darwish, his wife Nahida Mahmoud and their 5 children, the hope of obtaining the “American Dream” was quickly fleeting in the five months they have lived in Murray under refugee status. Photo: Leah Hogsten/ The Salt Lake Tribune.
Iraqi refugees returning to danger zone to escape poverty in Utah
By Julia Lyon / February 28, 2009

Frustration » “We’re human beings there. … Here we are mice.”

Murray, UT — Six months ago, Tarek Darwish and his family arrived in Utah as refugees craving a new and better life. Last week, his family wept and kissed his hand in farewell as the former lawyer, disillusioned, left to return to Iraq.

Life in Utah has been a list of disappointments. His family of seven lives in a two-bedroom apartment. None of the adults have jobs. His wife needs glasses and dental work but has been told Utah’s Medicaid won’t cover them.

He feels betrayed by the United Nations’ promises and the scant help offered by the American resettlement system. He hopes his family will follow when school is out.

“If you have a drop of brain, don’t leave Iraq,” he said through an interpreter.

After the truck taking him to the airport drove away, his wife of 38 years released a small cry.

As human rights organizations call for aid and resettlement for millions of Iraqi refugees, some who are exasperated by America’s refugee system are going home or attempting to return to other countries in the Middle East. They feel abandoned by federal policies that offer limited and brief financial support and leave many refugees living in poverty.

Refugees planning to leave acknowledge they may be less safe in Iraq, but believe they will be better able to afford food, pay rent and receive medical care.

Educated Iraqis eager to re-establish their middle-class lifestyle are making flaws in the U.S. resettlement system more apparent, while the troubled economy is compounding them, critics charge.

“They’re brought out of one crisis into another,” said Bob Carey, the chairman of Refugee Council USA, a coalition of refugee advocacy groups. “It’s not the type of welcome the U.S. refugee program was envisioned to provide.”

From the U.S. State Department to the United Nations High Commissioner for Refugees, which is not recommending large-scale return, officials say they have heard the stories of Iraqis returning but believe it to be more a trickle than a flood. The number is not tracked.

About a dozen Utah Iraqis have left or are on the verge of leaving for Iraq or other Middle Eastern countries. For some, Utah’s Muslim community has collected donations for plane tickets.

An Iraqi family with seven children living in Utah returned to Iraq a few weeks ago. Another Iraqi single mother is planning to leave for Syria soon. “We feel like we’re human beings there,” said Mohammed Abd, an Iraqi refugee whose family briefly considered leaving Utah. “We feel like here we are mice.”

‘We are the victims.’ When Darwish’s 25-year-old daughter, Nada, arrived in Utah ahead of the family last August, she was shown to a bare room without a bed — a sign of the strain on agencies that contract to aid new arrivals with few federal dollars and a small staff.

Thirty years after America began welcoming the world’s refugees, the world has changed but resettlement has not adequately evolved, critics say. Adjusted for inflation, the aid to refugees is less than the amount provided to Southeast Asian refugees decades ago.

Hoping for reform, the Refugee Council USA and other organizations are requesting a review of the system by President Barack Obama and the federal agencies that administer it.

Today, the government allots $850 per refugee to set up households, but the agencies take up to half for administrative costs and the remainder can disappear in a family’s first month. Depending on a refugee’s family size or employment, additional cash assistance may be available for a few more months. Refugees are also eligible for the benefits that all poor Americans can receive such as food stamps.

The U.S. has a special obligation to some Iraqi refugees, Carey believes — those who had to flee their country due to their work and connection to the U.S. military. Such assistance to the U.S. added to advocates’ frustration over delays in bringing Iraqis here.

When Iraqis finally arrive, their expectations are often high. Many were part of their country’s intellectual and professional elite. Their potential contributions to the U.S. are now at risk of being lost, Carey said, as they languish in poverty.

Some Iraqis agree they should be treated differently in light of their sacrifices and suffering during the war.

“We are the victims of the ‘Iraqi Freedom,’ ” said Darwish’s wife, Nahida Mahmoud, 53, through an interpreter, referring to the slogan for the conflict in Iraq. “We have zero hope, but we are hoping to change the future for others.”

Despite the problems with America’s system, advocates and refugees say Iraqis in need of a safe haven should continue to be brought to the U.S.

“Resettlement is not a tourist ticket to the U.S.,” said Kristele Younes, senior advocate at Refugees International. “It’s a tool to provide protection to those who are the most vulnerable.”

‘I expect better.’ In Iraq, one of Darwish’s daughters was murdered, shot in the back while her toddler was nearby. She and Nada Shammar, the sister who first arrived in the U.S., did security work with the American military, helping to make their family a target. Anonymous calls and letters demanded $20,000 and threatened rocket attacks. Their five-bedroom home was sprayed with bullets .

The family first fled to Syria, where the United Nations provided generous food and supplies and they could sometimes sell what they didn’t need. Their health care was essentially free.

In contrast, life in Utah has been harsh. “I don’t expect the same lifestyle I had before, but I expect better than this,” said Mahmoud.

Back home in Diala, an area in Iraq known for its oranges, 70-year-old Darwish plans to live with his daughters and to rent properties he owns to earn income.

But he is also leaving because diabetes and strokes have ransacked his body. The family hoped his health would improve in America. But now, were he to die here, they would have to pay thousands to return his body home.

With his departure, the family loses his monthly $674 Social Security payment. And the cash assistance they receive as refugees ends soon. Their rent is $720 a month.

If their situation doesn’t improve, Mahmoud said, the family will have no choice but to go back to Iraq. They will need donations to buy plane tickets.

Some refugees and their supporters predict the number of Iraqis leaving will grow in the months ahead. Arkan Alnawafleh, who paid for Darwish’s return trip, believes the U.S. government needs to take greater responsibility for refugees, if it chooses to bring them to America.

Darwish is “willing to risk his life and go back to Iraq where hundreds of people die every day rather than live here,” said Alnawafleh, who was born in Jordan but is now a U.S. citizen. “I still believe American people have big hearts. They care, but the government doesn’t.”

Not everyone in Darwish’s family is eager to go. His 17-year-old son, Husham Shammar, would like to stay and finish high school, attend college and become a doctor. But older sister Nada Shammar has been looking for a job since she arrived in August and wants to go back to the Middle East.

In Utah, their father dreamed of home. At the foot of his narrow bed sat a thrift store painting of a beach at twilight. Looking at the picture reminds him of relaxing in his backyard in Iraq among his orange and lime trees. The air was sweet.

“I can’t watch my kids suffer,” he said, lying in his bed the night before he left Utah, his face occasionally contracting in grief. “I don’t want to be the extra weight.”