US Military: A Little Too Big for Its Britches 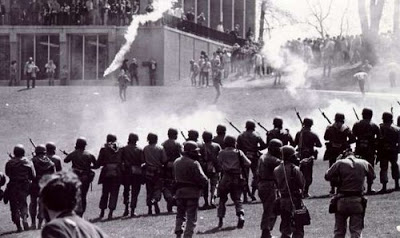 It was disturbing to learn the other day just how close the last administration came to violating laws barring the military from engaging in law enforcement when President George W. Bush considered sending troops into a Buffalo suburb in 2002 to arrest terrorism suspects. Unfortunately, this is not necessarily a problem of the past. More needs to be done to ensure that the military is not illegally deployed in this country.

The Posse Comitatus Act of 1878 generally prohibits the military from law enforcement activities within the United States. If armed officers are going to knock on Americans’ doors, or arrest them in the streets, they should answer to civilian authorities.

Despite this bedrock principle, The Times’s Mark Mazzetti and David Johnston reported last week, top Bush administration officials, including (no surprise) Vice President Dick Cheney, argued that the president had the authority to use the military to round up a suspected terrorist cell known as the Lackawanna Six.

Mr. Cheney and others cited a legal memorandum co-written by John C. Yoo (author of the infamous torture memo), which made the baseless claim that the military can go after accused Al Qaeda terrorists on United States soil because it would be a matter of national security, not law enforcement.

The Lackawanna Six controversy is history, but there are troubling signs the military may be injecting itself today into law enforcement. The American Civil Liberties Union has been sounding the alarm about the proliferation of “fusion centers,” in which federal, state and local law enforcement cooperate on anti-terrorism work. According to the A.C.L.U., the lines have blurred, and the centers have involved military personnel in domestic law enforcement. Congress should investigate.

Janet Napolitano, the homeland security secretary, said Wednesday that fusion centers were not intended to have a military presence, and that she was not aware of ones that did. She promised greater transparency about what role, if any, the active military was playing.

Civil libertarians are also raising questions about a program known as the Chemical, Biological, Radiological/Nuclear and High-Yield Explosives Consequence Management Response Force. The Army says its aim is to have active-duty troops ready to back up local law enforcement in catastrophic situations, like an attack with a nuclear weapon. That could be legal, but the workings of these units are murky. Again, Congress should ensure that the military is not moving into prohibited areas.

Some of the military’s line-crossing seems ad hoc. Earlier this year, when a man in a small town in Alabama went on a shooting spree, Army troops reportedly went out on the streets to participate in the law enforcement effort. It is still unclear precisely what role they played. It is important that the military be thoroughly trained on what the law does and does not permit.

After the lack of respect for posse comitatus at the highest ranks of the previous administration, the Obama White House and Congress must ensure that the lines between military and law enforcement have been restored, clearly, and that they are respected.

1 Response to US Military: A Little Too Big for Its Britches