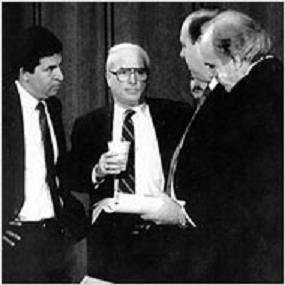 John McCain, with his lawyers, before he testified before the Senate Ethics Committee in 1991 about his involvement in the Keating Five scandal. Photo by Andrea Mohin / NYT.
John McCain, Charles Keating and the S&L Scandal
By Sherman De Brosse / The Rag Blog / October 25, 2008

This is the fourth in a series by Rag Blog contributor Sherman De Brosse, a retired history professor, on John McCain, his shady involvements, past and present, and his wrong-headed and ill-informed political positions.

Twice, John McCain’s involvement in the Keating Five Scandal has intruded in the current political campaign. When Sarah Palin and John Mc Cain started associating Barack Obama with William Ayers, the Obama campaign put up a video about it. The mainstream media did not follow up by explaining what it was all about.

The matter came up again with the “Joe the Plumber” phenomenon because Samuel Joseph Wurzelbacher bears the same name as Charles Keating’s son-in-law and executive vice president. Some see a connection because that is a rare last name and some people with that name are big GOP contributors. It is probably purely coincidental, but McCain’s deep involvement in the scandal is important because it reflects on his character and long-time pattern of delivering for big contributors.

Banker Charles Keating also got into the Phoenix business of befriending Arizona politicians. He gave a $55,000 campaign contribution to Bob Corbin, a former Marley employee, who ran unopposed for attorney general. He would supervise state-chartered banks. Keating got his start as a lawyer for Carl Lindner, who made great profits from the Vietnam War. One of the nation’s wealthiest men, Lindner owned seven S&L’s that were to fail. As owner of United Brands, he was in a position to reap profits from the government’s secret programs to fund and supply the Nicaraguan contras through Honduras.

Keating purchased property for his office in Phoenix from a mob-connected attorney in 1980. He had a mansion in the Bahamas, where the same attorney family had a casino.

Prudential Insurance loaned him $2 million in 1985. He had numerous dealings with BCCI, which turned out to be the bank of crooks and criminals.

Keating had invested 17.5 million in TrendInvest without notifying his American Continental board. Walter Bush, cousin to the current president, was involved with Continental, which later collapsed. There were many other baffling investments. Some think he was laundering CIA money involved in its Latin American operations.

Keating had a business relationship with Hensley. Keating was good at buying political influence, and he had a ten year close relationship with John McCain, donating about $112,000 to McCain campaigns. Nine times, he paid to transport McCain’s family and babysitter to his place in the Bahamas, often on a private plane. In addition, he permitted Cindy and her father to buy into a lucrative shopping center in California. In return McCain helped him convince Ronald Reagan to deregulate the Savings and Loan industry and place a Keating friend on the board that regulated it. Deregulation was a green light for Keating to build the Phoenician, a resort, in partnership with the rulers of Kuwait. The federal government seized it in February, 1989. His bellmen were permitted to remove 24 cartons of documents.

When the Feds started investigating Keating, McCain organized the “Keating Five” senators to put pressure on the Federal Home Loan Bank board to back off. At one point McCain even demanded that the chairman of that board not participate in the investigation of Keating.

When Keating began to get into trouble and marketed $230 million in bad bonds, he came up with a scheme to cover them with profits from a water scheme. He and a partner bought up a lot of water rights and then had the legislature pass a law requiring Phoenix to first buy as much water as Keating could sell before going to other vendors. They planned to pump about a million acre feet of water in a year. De Concini would also profit because he had purchased some water rights. Such a scheme could only take place in a state where the press looked the other way and the politicians were largely corrupt. The Arizona Republic and the Phoenix Gazette were owned by the family of Dan Quayle.

The Arizona House of Representatives breezed the bill through in two days, but Jerry Gilespie held up things in the Senate. He found a way to stop it dead in its tracks, but he lost his seat in the next election. No wire service reported the story but it was covered by Phoenix Magazine in 1989. This doomed Keating.

As late as May, 1988, Keating thought he had won his battle against the Federal Home Loan Bank Board. On the 20th, he threw a big party because Senators Mc Cain and De Concini, with three others, had succeeded in having the investigation of his Lincoln Savings moved from San Francisco to Washington. In excitement, he removed his shirt to reveal a tee shirt with a skull and bones superimposed over the letters FHLBB. He had spent a million dollars buying politicians. It looked like he had won, but he was done in when the water scheme petered out.

Keating was eventually fined 3.6 billion and sent to prison. He has been called the father of the S&L crisis. McCain was investigated by the Senate Ethics Committee and was only told he exercised “poor judgment.” Almost as soon as he saw that he had a problem, he played the role of the repentant sinner and began to create the false reputation that he was an opponent of lobbyists and the improprieties that seem to flow from their involvement in public life. To convince voters that he was a different sort of politician, he started calling for campaign finance reform. Mrs. McCain retained her profitable partnership with Keating.