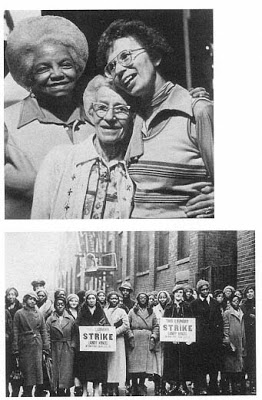 I read recently that Vicky Starr died on Thanksgiving Day, November 26, 2009. She was 93 years old. Thinking about Vicky Starr (or for fans of the film Union Maids, Stella Nowicki) reminded me about how her life, which many of us learned of through the film, was so inspirational.

As a teenager, Vicky Starr left the family farm in Michigan and arrived on the south side of Chicago in 1933. She stayed in the home of Herb and Jane March, Communist activists who had come to Chicago to organize the packing house workers in the huge Stockyards. Under March’s tutelage she sought employment in the Yards and almost immediately began to network with workers to build a union of workers in the days leading up to the formation of the Congress of Industrial Organizations (CIO).

The processing of meat from the 1880s until the late 1950s was centered in Chicago. The Stockyards, housing the Big Four packers (Armour, Cudahy, Swift, and Wilson), employed thousands of workers. Because the work was so dangerous and unpleasant, it was largely carried out by the most marginalized sectors of the working class.

In the era of Upton Sinclair’s The Jungle workers were primarily immigrants from Eastern and Southern Europe. After World War 1 and the “the Great Migration,” African Americans secured the lowest paid and most dangerous jobs in the Yards. Historic union organizing drives in 1904, and 1921 faltered because of racism and ethnic conflict among workers. Communist and socialist organizers in the Yards, such as March, realized that combating racism was central to organizing industrial unionism in the meat packing industry. 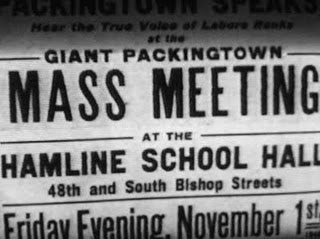 Still from Union Maids. Image from Documentary Starts Here.
And it was rank-and-file activists like Vicky Starr who tirelessly met with workers, helped write leaflets and newsletters, interacted with the radical students from the University of Chicago who had offered their assistance to union organizing drives, and communicated with sympathetic members of the influential Catholic Church in the city.

As a member of the Young Communist League, Starr and her comrades would read classic Marxist and Leninist texts. Since Starr would be identified with organizing campaigns by her bosses she often lost her job in the yards. When that occurred she would apply for work at another packing house company using a different name.

She told Alice and Staughton Lynd (Rank and File, 1973) many years later: “When I look back now, I really think we had a lot of guts. But I didn’t even stop to think about it at the time. It was something that had to be done. We had a goal. That’s what we felt had to be done and we did it.”

In 1937, workers established the Packinghouse Workers Organizing Committee (PWOC). Despite resistance by the major meat packers, state violence, red-baiting against union organizers by the state and the American Federation of Labor’s Amalgamated Meat Cutters (AMC), the United Packinghouse Workers of America (UPWA-CIO) was constituted in 1943.

Until its merger with other unions, it remained a militant trade union that fought racism and red-baiting and publicly opposed United States foreign policies such as participation in the Korean War. And during its formative years in the mid-1940s Vicky Starr served for a time as Education Director for District 1 of UPWA.

Central to Starr’s contribution to the working class from the time she was a member of the Young Communist League, to the budding labor movement, the formation of the UPWA, and later as an organizer of clerical workers at the University of Chicago, was her constant struggle against racism and sexism.

After the formation of UPWA Starr said “We tried to make sure that there were both Negroes and whites as officers, stewards… in all the locals.” She fought residential segregation and participated in building the Back of the Yards Council on Chicago’s south side, and worked to end the exclusion of African Americans from professional sports. And in the end she recalled that the most militant trade unionists on the shop floor, the beef kill, were African Americans.

As an organizer in the 30s and a UPWA staffer in the 40s she combated sexism as well. “Women had an awfully tough time in the union because the men brought their prejudices there.” Women often had the most demeaning jobs in the Yards, wage rates discriminated against them, their special needs such as child care received no attention, and they often were fearful of demanding their rights on the shop floor and in the union.

As a socialist, Starr reflected on those halcyon days of UPWA-CIO organizing. She said that there was a sense that workers were ready to come together. There was a growing feeling of working class solidarity. Union organizers would show up at the Stockyards with literature and speeches. And at the grassroots she and others were on the shop floor spreading the word informally about the union.

And socialism needed to be addressed in terms of the concrete benefits of people’s lives. “You had to talk about it in terms of what it would mean for that person. We learned that you can’t manipulate people but that you really had to be concerned with the interests and needs of the people. However, you also had to have a platform — a projection of where you were going.”

Starr left the Yards in 1945, was forced underground for a time in the McCarthy period, raised four children and returned to work as a secretary at the prestigious University of Chicago. She still had “a platform” at the university, organizing all non-professional staff. Despite predictable resistance from the bastion of liberalism in higher education she applied the grassroots organizing skills she learned as a teenager in the stockyards to achieve victory for clerical workers. Teamsters Local 743 was recognized in 1978. Vicky Starr became the first shop steward of the new local. 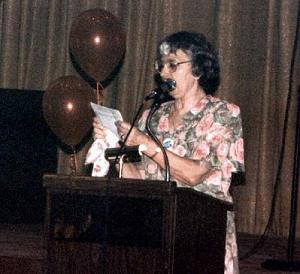 Vicky Starr in 1992. Photo from Chicago DSA.
But Starr’s contribution to the American working class, Black and white, male and female, did not remain unnoticed beyond the shop/office. Alice and Staughton Lynd captured her remembrances of CIO organizing in the 1973 book Rank and File and the clerical workers struggle in the 2000 book New Rank and File. And especially, “Stella Nowicki” was one of three stars (the others were Sylvia Woods and Kate Hyndman) in the wonderful documentary (Union Maids, 1977) about women organizing in the CIO in the 1930s.

This last project made Vicky Starr a major celebrity. It brought to the attention of new generations of activists the fighting spirit of the 1930s, the central role Communists played in the battles, and the absolute centrality to organizing the working class of fighting racism and sexism.

Still relevant today, Union Maids (and the Lynds’ collections of interviews), can help inspire, educate, and inform activists about tactics, strategy, and basic principles of organizing.

Vicky Starr concluded her 1973 interview saying: “It was a privilege and a wonderful experience to participate in the excitement of those times.”

It is important to remember Vicky Starr for what she did for the working class, particularly industrial and clerical workers. And reflections on her life and work can still inform activists as they struggle for economic justice today.

[A memorial celebration of Vicky Starr’s life will be held January 23, 2010 at 4 pm at the North Shore Retirement Hotel, 1611 Chicago Avenue, Evanston, Illinois.]