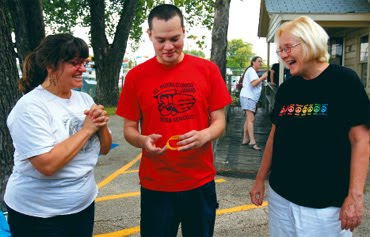 Holly Baker of Georgetown and Col. Ann Wright of Honolulu, Hawaii, look at the arm band of Victor Agosto, who was sentenced to a month in jail and stripped of his Army rank for refusing orders to deploy, during a celebration of his release Saturday at Under the Hood in Killeen. Agosto was assigned to the 57th Expeditionary Signal Battalion at Fort Hood. Photo: Herald/Catrina Rawson.
War objector gets out of jail
By Rebecca LaFlure / August 30, 2009

A Fort Hood soldier who was arrested for refusing orders to deploy to Afghanistan was released from jail Saturday.

Victor Agosto, 24, who believes the wars in the Middle East violate international law, pleaded guilty to disobeying a lawful order during a summary court martial at Fort Hood earlier this month.

The Iraq veteran, assigned to the 57th Expeditionary Signal Battalion, was sentenced to 30 days in Bell County Jail and demoted to private, the lowest Army rank. Agosto ripped the specialist rank off his uniform after the sentence was read.

Now, after a 24-day stint behind bars, Agosto said his only regret is that he didn’t refuse orders sooner.

“People always say, ‘I can’t imagine what you’ve gone through,'” Agosto, said Saturday, wearing a T-shirt that read, “The people united will never be defeated.”

“I don’t feel like I’ve had to endure a lot of difficulties. … You’ll never regret following your conscience.”

Agosto said he expects to receive an other-than-honorable discharge from the Army. He’ll likely be chaptered out by his unit in the coming weeks, and his unit commanders will decide the appropriate discharge.

Agosto said his stint in jail was “relaxing.” He received daily letters from around the world, including Ecuador and Germany.

“Everyone was very supportive,” Agosto said. “I received many post cards from people thanking me for what I did.”

During the Aug. 5 trial, Agosto said he did not oppose the wars in the Middle East when he enlisted in 2005.

It was not until he deployed to Iraq that he began to have doubts, he said. When Agosto returned from Iraq in November, he thought his Army contract would end this summer. Instead, Agosto was ordered to Afghanistan under the stop-loss program, which extends the tours of military service members beyond their contracts.

At the end of April, Agosto went public about his intent to resist the war, and in May, he refused an order from his company commander to prepare to deploy. Agosto said he did not apply for conscientious objector status because he does not oppose all wars.

Col. Ben Danner, III Corps public affairs officer, said on Aug. 5 that Agosto’s court-martial was not about a soldier who refused to deploy for combat, but rather, one who refused a lawful order from a noncommissioned officer to report to the Soldier Readiness Check site.

“The Army is a values-based organization that embraces the values of loyalty, duty, respect, selfless service, honor, integrity and personal courage,” he said. “For a soldier to violate military law by refusing to obey orders is a serious matter.”

Peace activists flooded the Under the Hood Café in Killeen Saturday evening to celebrate Agosto’s release.

Bryan Hannah, an Iraq War veteran, attended Saturday’s event. Hannah refused to deploy to Iraq in November after he was stop-lossed. The former Fort Hood soldier never faced a court-martial, but instead received an Article 15. He was demoted from specialist to private and given an honorable discharge from the military.

“There’s nothing in Iraq I would have died for,” Hannah said, who’s now a student at Austin Community College.

“It takes great principle and courage to say, ‘I love my country, but I’m not loving what my country’s doing,'” she said.

Agosto is not the only Fort Hood soldier who has resisted the war in Afghanistan because of his beliefs. Sgt. Travis Bishop, also with the 57th Expeditionary Signal Battalion, was sentenced to a year in jail, stripped of his Army rank and given a bad conduct discharge during a special court martial at Fort Hood Aug. 14.

Unlike Agosto, Bishop went absent without leave (AWOL) the day he was supposed to deploy to Afghanistan. He turned himself into his unit a week later.

An eight-member jury found him guilty of two counts of missing movement, disobeying a lawful order and going AWOL.

Bishop, who said fighting in a war violates his Christian ethics, filed for CO status. His original application was denied, but James Branum, his attorney, said he is currently writing a rebuttal on the grounds that the Army chaplain evaluation did not meet legal requirements.

Agosto said he plans to remain an active member of the peace movement. He’s considered a possible speaking tour, and wants to eventually go to college for sociology.

“Some kind of major where I don’t make any money,” he said.

He hopes to influence other soldiers against the wars in the Middle East to follow their conscience, he said.

“That was part of the idea of doing what I did,” he said.

This entry was posted in RagBlog and tagged Conscientious Objection, Peace Movement. Bookmark the permalink.